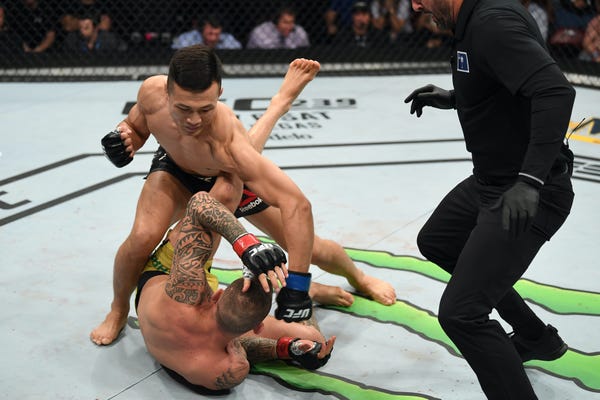 FIGHT ISLAND — Chan Sung Jung, better known by his nickname Korean Zombie, is one of the biggest cult heroes in the UFC because of his dignified image, ferocious fighting style, and graphic t-shirts which depict aggressive undead characters.

On Saturday, October 17, at the behind-closed-doors Flash Forum venue at Fight Island in Abu Dhabi, Korean Zombie will be looking to open Brian Ortega's skull with crisp, powerful strikes before metaphorically feasting on the Californian's brain.

The stakes are high for both men.

Victory at the UFC Fight Island 6 event, to be broadcast on ESPN+ in the US, propels the winner into a mandatory title shot against the current UFC featherweight champion Alexander Volkanovski.

It would be Korean Zombie's first chance at a championship since he lost to Jose Aldo in 2013, months before he was conscripted to the South Korean military, served two years, and began to climb back up the UFC's rankings gradually.

It is a journey that has birthed a rivalry because Ortega hit Korean Zombie's friend and former translator Jay Park, a rapper and musician, with an open-palm slap at a fan-attended event earlier in the year.

The ordinarily mild-mannered Korean Zombie went apoplectic on social media, accusing Ortega of being a coward.

Ortega said this week at a media day attended by Insider that this weekend's fight will be so brutal it will land both men in a local hospital.

The 145-pound match is one of the most anticipated on Fight Island.

Before his mandatory, two-year service in 2013, Korean Zombie lamented his upcoming hiatus from the fight game.

He told Fightland he would miss competing in the Octagon and on a potential barnburner with Conor McGregor.

At that time, McGregor been crowned a two-weight Cage Warriors champion in Europe, signed to the UFC with great interest in Ireland, and had begun to show the world's premier MMA firm what was to come with scintillating performances over Marcus Brimage and Max Holloway.

By contrast, Korean Zombie began his service following a fourth-round knockout loss to Jose Aldo in a UFC featherweight title fight at UFC 163.

Away from the glitz and the gore of the Octagon, Korean Zombie headed off to basic training. He told Fightland: "I'll be at the training base for a month, then I will be sent to City Hall in Seoul as I have been assigned to a government office to work until 6 p.m."

Reports of what that typical military training involves were reported by a former Insider Inc. video producer Gene Kim who had been conscripted himself and detailed the experience in a Voices of Color by Insider video two years ago.

"The law requires every male to serve the military and it is extremely hard to get out of it," Kim said, noting that the Korean Civil War and the decades-long tension with North Korea required the South always to be ready for conflict.

"If you purposely evade the military duty you will get jail time," he said.

Instructors intentionally try to intimidate and scare conscripted men, according to Kim. "You'll be yelled at constantly."

Kim detailed one training session which simulated a chemical attack. Trainees were fitted with gas masks and taken into a small room. Once everybody was inside, gas-filled the room and with a guard on the only exit. They were then ordered to remove the gas masks and breathe the toxic air.

"It's just chaos in that tiny room," Kim said.

Everybody cries an uncontrollable amount of tears, streams of spit pour from their mouths, and any exposed skin "feels like a thousand needles just grabbing onto you."

It is unclear what Korean Zombie went through during his specific training, but after his month-long introduction, he was given a government office job because of surgeries needed after incurring injuries from years of professional fighting.

The two-year spell for Korean Zombie was "uneventful," he said in an interview with MMA Fighting in 2017.

"I was like a civil servant," he said. "After basic training, I was able to live at home and commute to work. I didn't train as intensely as I normally would have, so I focused more heavily on improving my skills in the different disciplines."

At a Fight Island media day this week that Insider attended, Korean Zombie's coach and translator Eddie Cha said: "He did serve and he is proud to serve his country."

"You'd have to think his time in the military has affected him positively and has helped him to develop, mature, and continue to evolve his game inside the cage.

"I also feel that the first fight with Eddie Cha [in his corner] — the Renato Moicano fight — you see a different style with the striking.

"Coach Eddie has done a phenomenal job of tightening up some things on who is already an amazing athlete.

"And I think you see a difference in not just the brawling, but the precision. These last two fights he's been very precise, landing combinations we've been training for, for those specific opponents and it's paid off.

"I feel a lot of that is attributed to Coach Eddie and the camp he puts together for KZ, who is seeking to evolve all the time."

MMA analyst and UFC commentator Dan Hardy told Insider that the biggest difference between a pre-conscription Korean Zombie and a post-conscription one is not an evolved skillset per se but rather a more mature person experienced at decision-making in the midst of battle.

"The main difference now is his maturity," said Hardy. "He's grown up. He's watching his place in the sport and realizes what he needs to do to be at the top. He's a contender, no doubt about it.

"He's got skills wherever [the fight] goes and it's all about decision-making when you get to the top-5. And the guys who make the best decisions are usually the ones who are the most successful."

The rivalry he shares with Ortega, one which has seen the American open-palm slap Korean Zombie's friend, the rapper and musician Jay Park, brought out a new side of his personality which House had not seen.

"Seeing emotion from him in the situation with Ortega was something that was very new to me."

House said Korean Zombie otherwise carries himself in a dignified way. "He's always on time [to meetings]. And brings it every time to the cage.

"He's very exciting, and he's a good family man. His wife is here with us and they have their own reality show in Korea which is very popular. They're living the dream."

That dream includes another shot at the UFC featherweight championship

It's been seven years since Korean Zombie's last UFC featherweight title shot. Since then, he's completed his military service, fought four times, and had to navigate the coronavirus pandemic like many other athletes.

But victory over Ortega would elevate him back to where he was before, with a title shot against Volkanovski on the horizon.

"The Ortega fight is going to be a great one," House told us. "We've got a lot of respect for him, he's one of the best in the world. I feel people know he's dangerous in grappling but I feel he's dangerous everywhere. And he doesn't get credit for that.

"He's got great knockout wins over Clay Guida, Frankie Edgar, great work against Moicano. People might think if we're going to lose [to him] it will be by submission, but Ortega is dangerous everywhere."

Coach Cha said: "Ortega is a great fighter. But the way Korean Zombie's catching his stride … if you look at his last two fights, not just offensively but defensively, even when he came out of the army when he fought Dennis Bermudez he had a first-round knockout but he still got clipped quite a bit.

"The biggest thing that we cleaned up is his footwork, head movement, not getting hit, distance, and range.

"You'll see differences in his footwork, his pop, hand-speed. Then his wrestling all the way down to his jiu-jitsu and even his physique.