A determined Tevita Kuridrani is using his first pre-season in six years to ignite his World Cup hopes, putting contract talks on hold to focus on his Wallabies ambitions.

Wallabies coach Michael Cheika was in Canberra on Tuesday to meet with ACT Brumbies staff as part of a touring roadshow to discuss his plans for the World Cup next year. 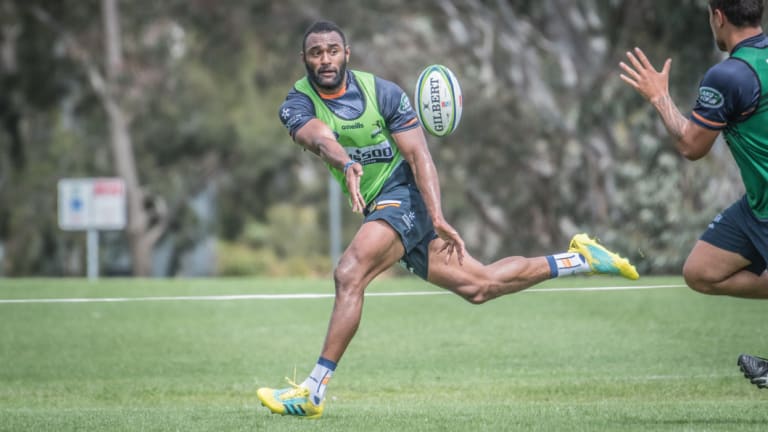 Tevita Kuridrani is using his first pre-season in six years to force his way back into the Wallabies.Credit:Karleen Minney

The workload of Kuridrani and other Wallabies hopefuls was at the top of the agenda and Cheika wants to call all players of national interest to a 10-day camp in January.

Kuridrani's World Cup involvement hinges on his Brumbies form after the 58-Test centre lost his Wallabies spot in June and then injury ruled him out of the spring tour.

Looming contract negotiations will add extra incentive to play well, but he says he will delay a decision to make sure there are no distractions for a fast start to next year.

"For me at the moment it's just about trying to get fit and then come into next year to play my best season," Kuridrani said.

"I'll let the rugby do the talking and find out next year [about my future]. I just want to be fit and to get back to my best … so the contract isn't [on my mind].

"The World Cup is a long-term goal for now. But at the moment I'm trying to take advantage of this pre-season and then hopefully comeback better next year."

The Brumbies took a break from their pre-season training on Tuesday to deliver Christmas gifts to children at The Canberra Hospital.

"It's so good to see the smiles on their faces, just to have a chat and hopefully make their day," Kuridrani said.

But the Brumbies back-room staff were working in overdrive for Cheika's visit to discuss plans to manage player work loads and rest them from some Super Rugby games next year.

ACT coach Dan McKellar and his staff are also starting to plan long-term with a long list of players set to come off contract after the World Cup.

Kuridrani, Christian Lealiifano, David Pocock, Henry Speight, Sam Carter and Scott Sio are all yet to decide their future beyond the end of 2019 and the Brumbies will ramp up negotiations next month.

Kuridrani tore his pectoral muscle in the last game of the Super Rugby season and was left out of the Wallabies spring tour squad after failing to play a game before the team left for Europe.

He used his unexpected extra time to refresh his mind and body, travelling to Egypt, Israel, China and Thailand to tick off bucket-list items before training with the Brumbies in November for the first time since 2012.

The 27-year-old has been a Wallabies regular since making his debut in 2013, and he bounced back from a form dip this year to rediscover his best before injury struck.

"I haven't done a pre-season for a while, so it's been a shock to my body," Kuridrani grinned.

"It was fair enough that the Wallabies said I needed to play a game before getting back to international rugby. I took it as a way for me to do a proper pre-season, because next year is a big season.

"I see it as a positive, a great chance to get some training and I used my break to travel, refresh my mind. By the end of the holiday, I was so keen to come back and train the house down."