Louisiana State University, one of the most prominent institutions in the South and a powerhouse of college sports, failed to prevent abuse or harassment by some of its athletes and its onetime football coach or sufficiently investigate accusations against them, according to two reports released this week.

Although the coach, Les Miles, was fired more than four years ago for his poor on-field record and was later hired by the University of Kansas, investigators found in a 2013 report that was made public only on Thursday that he had acted improperly toward at least one female student who worked for the L.S.U. athletic department.

Then on Friday, a more sweeping 148-page account documented a long record of errors, missteps and secrecy around misconduct allegations across the university. The report, prepared by a law firm that L.S.U. hired last year after USA Today detailed accusations against former athletes, prompted the university to suspend two athletics executives without pay.

“Our job is to protect our students and support them in their times of need,” L.S.U.’s interim president, Thomas C. Galligan Jr., said on Friday. “It has become clear we haven’t always fully lived up to our commitment.”

Instead, he said, the university had “betrayed the very people we are sworn to protect.”

The lawyer who led the new investigation, Scott Schneider, said Friday that there was no evidence student-athletes were deliberately favored, but he found a pattern of delays and missteps around their cases. He also depicted systemic issues at L.S.U. that impeded prompt, rigorous investigations of reported assaults, no matter who was accused.

Some of the most troubling allegations of recent years involved two football players: Drake Davis, who played for L.S.U. from 2016 until he was dismissed before the 2018 season after being arrested, and Derrius Guice, who was at L.S.U. for three seasons before being drafted into the N.F.L. in 2018.

At least three women said that Davis had abused them when he was a student or soon after his expulsion from the university in 2019. One woman who dated Davis accused him of physically abusing her at least 10 times. At a meeting with the woman after one episode in 2016, a football staff member said that Davis’s “career at L.S.U. will be over, but we can totally call the police if that’s what you feel like he deserves after this.” The woman declined to contact the police because, as she put it, she “was still what I felt like was in love with Drake.”

L.S.U. offered no other immediate support, the report concluded. The university’s Title IX office, which investigates gender discrimination cases under the federal law of the same name, was not told about any trouble between Davis and the woman until October 2018.

In the intervening years, the report said, there was “no question” that Davis had physically abused a woman who played tennis at L.S.U. — conduct that also made its way to the Title IX office after a delay, only for the office to take little action.

Schneider said that it had been “a clear error” not to suspend Davis quickly after he acknowledged striking the woman, who had severe injuries that left her ribs swollen for weeks, and that “the failure of the athletics department to report the earlier incident” had “compounded the error.”

More reports connected to Davis’s abuse of the woman followed in subsequent months, and eventually Davis was criminally charged and suspended from L.S.U.

He pleaded guilty in January 2019 to three misdemeanors and was expelled from the university that July. Months later, another L.S.U. student accused Davis of shoving her to the ground.

“The reality is that the university was not equipped to handle a case this complicated,” Schneider wrote. “Equally clear is that these are precisely the sort of cases Title IX offices must be prepared to respond to.”

Guice, who was released by the Washington Football Team last August after he was accused of domestic violence, was repeatedly accused of sexual violence while he was at L.S.U. Friday’s report said that, for varied reasons, the university had never investigated the allegations or imposed discipline against Guice, who has denied wrongdoing.

“There also are no records that he was ever notified of these reports or that the university even intervened to provide him some targeted training,” Schneider wrote in Friday’s report, which also said that Ed Orgeron, L.S.U.’s current football coach, had “credibly denied” telling a player who dated one of Guice’s accusers that “everybody’s girlfriend sleeps with other people.”

Orgeron also denied knowing that Guice had been accused of rape, though Schneider said he had been aware of some misconduct allegations against players.

The Title IX office, the report concluded, had been inadequately staffed with two people handling cases for a campus of more than 34,000 students. By contrast, the report noted, the L.S.U. football program had 11 full-time coaches, 13 analysts and dozens more employees when it had a championship season in 2019.

But the report traced concerns about L.S.U.’s culture to before the tenure of Orgeron, who became the coach after Miles was fired in 2016.

The university spent years before and after the dismissal keeping an investigation of Miles’s behavior shielded from public view. This week’s release of the 2013 report came after USA Today brought a public records lawsuit in Louisiana.

The investigation that led to that report began after L.S.U. received two complaints about Miles from female students who worked for the football program, where Miles had outsize clout and played a role in the recruitment and hiring of student employees who were women. Citing people who supervised the student employees, the investigators said Miles “made it clear that he wanted these employees to have a certain ‘look’ (attractive, blond, fit).”

Although investigators ultimately said that the first woman to voice concerns did “not appear to be a reliable source of information,” L.S.U. told Miles after her 2012 complaint that he was not to meet one-on-one with student employees or to call or text them.

But another student employee came forward in February 2013 and eventually told L.S.U. that Miles had begun sending her messages after she started work. The woman told investigators that Miles had urged her to use an alias and add her phone number to his personal cellphone — a number not even top L.S.U. officials had. 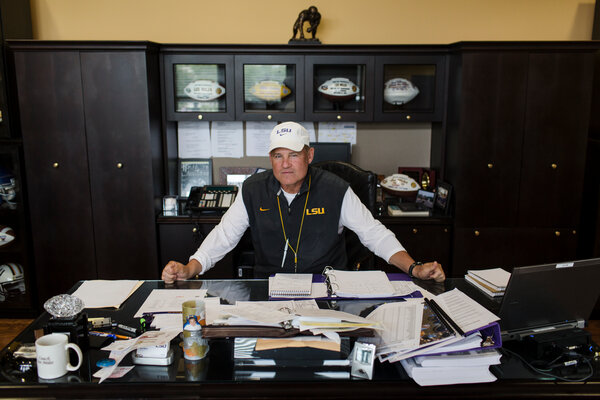 Miles and the woman later met away from the campus and drove around. The woman said that Miles had suggested they go to a hotel or his condominium, and that Miles kissed her twice. Miles acknowledged communicating with the woman and their meeting in his car, but he denied kissing her or suggesting they go elsewhere.

“Coach Miles learned an unfortunate lesson eight years ago: His naturally open and trusting nature exposes him to false claims by people with a different agenda than his,” said Peter Ginsberg, Miles’s lawyer, after the 2013 investigation was released. He declined to comment on Friday’s report, and Kansas, which hired Miles in 2018, said this week that it had not seen the 2013 report before Thursday.

Although parts of the 2013 report were redacted, its authors did not believe the university had grounds to fire Miles, even as support for him eroded internally. In April 2013, Joe Alleva, who was then the athletic director, wrote to L.S.U.’s chancellor that Miles’s “continued employment needs to be seriously considered.” He later wrote that he believed L.S.U. had cause to fire Miles.

L.S.U. ultimately barred Miles from hiring student workers in athletics for “personal work,” like babysitting. He was also instructed to avoid personal communications with any student employee in athletics.

The university also ordered Miles to pay for at least eight hours of training with an employment lawyer.

Schneider hinted that in the Miles case, he saw another example of how L.S.U. had often operated.

“The issue is whether the university responded to this report against a powerful member of the university and athletics department in a manner consistent with then-existing legal guidance, well recognized best practices, and institutional policy,” he wrote. “The answer is ‘no.’”

Eagles-Cowboys clash will make or break so many legacies