IT was turning into the perfect afternoon for Jurgen Klopp and Liverpool.

Fabinho had just made it 2-0 following Mohamed Salah’s 100th Premier League goal and the Reds were cruising. 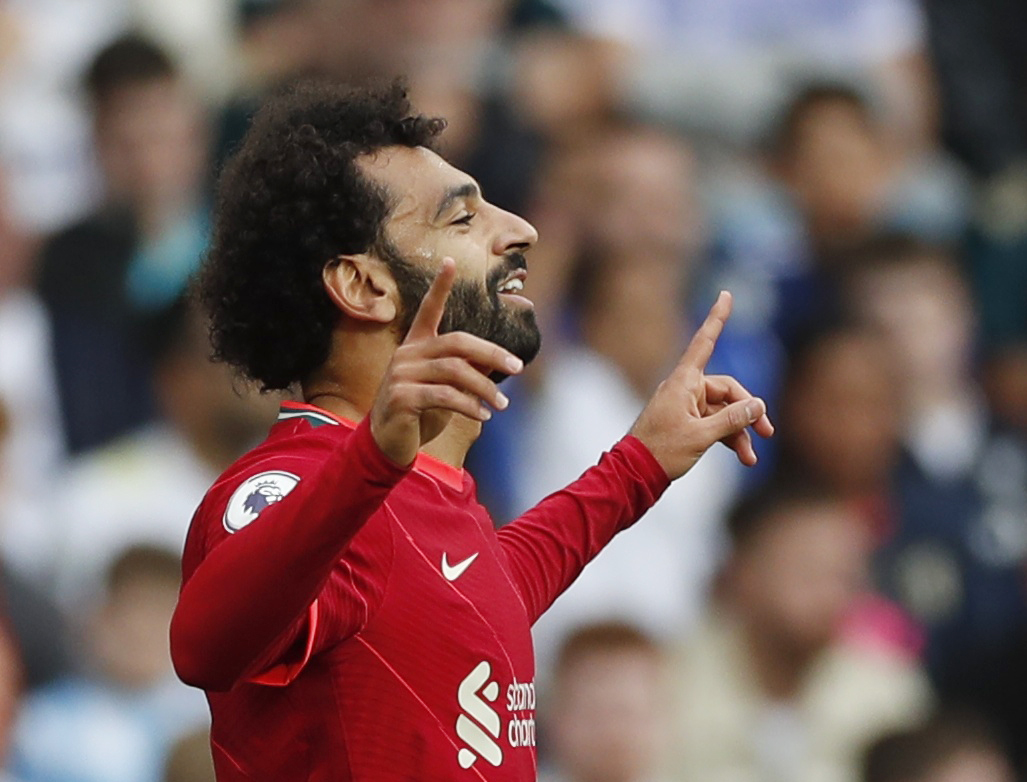 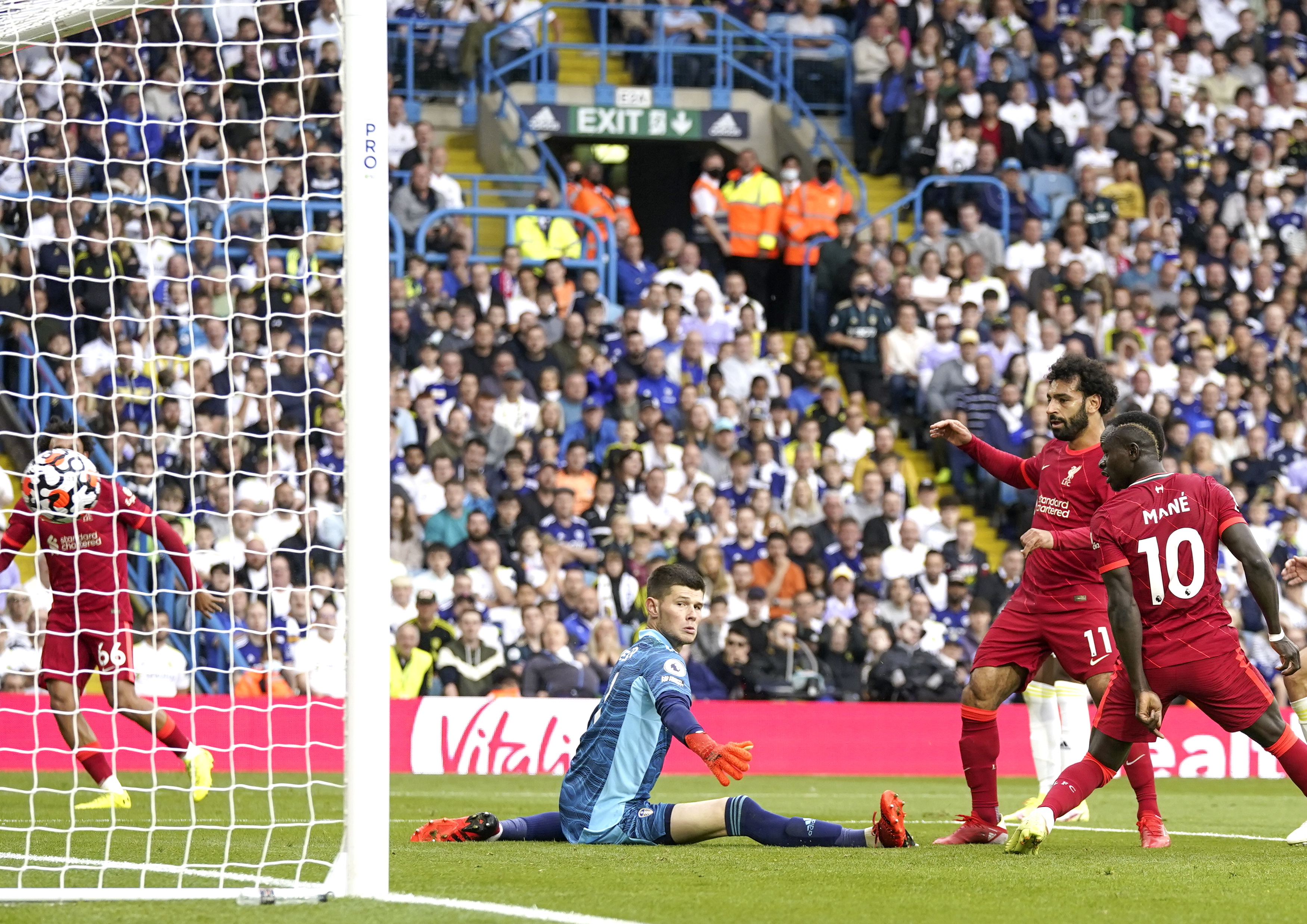 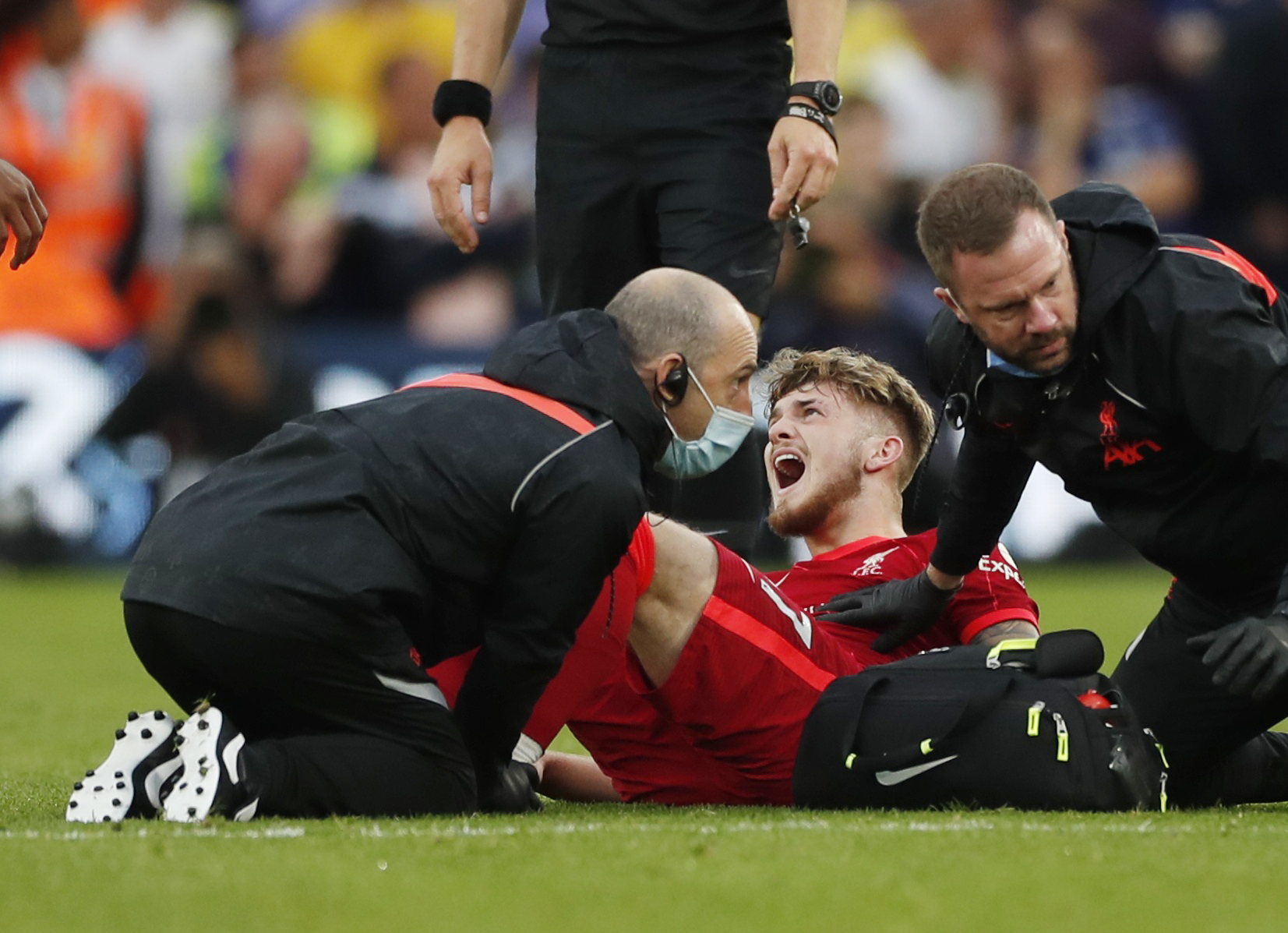 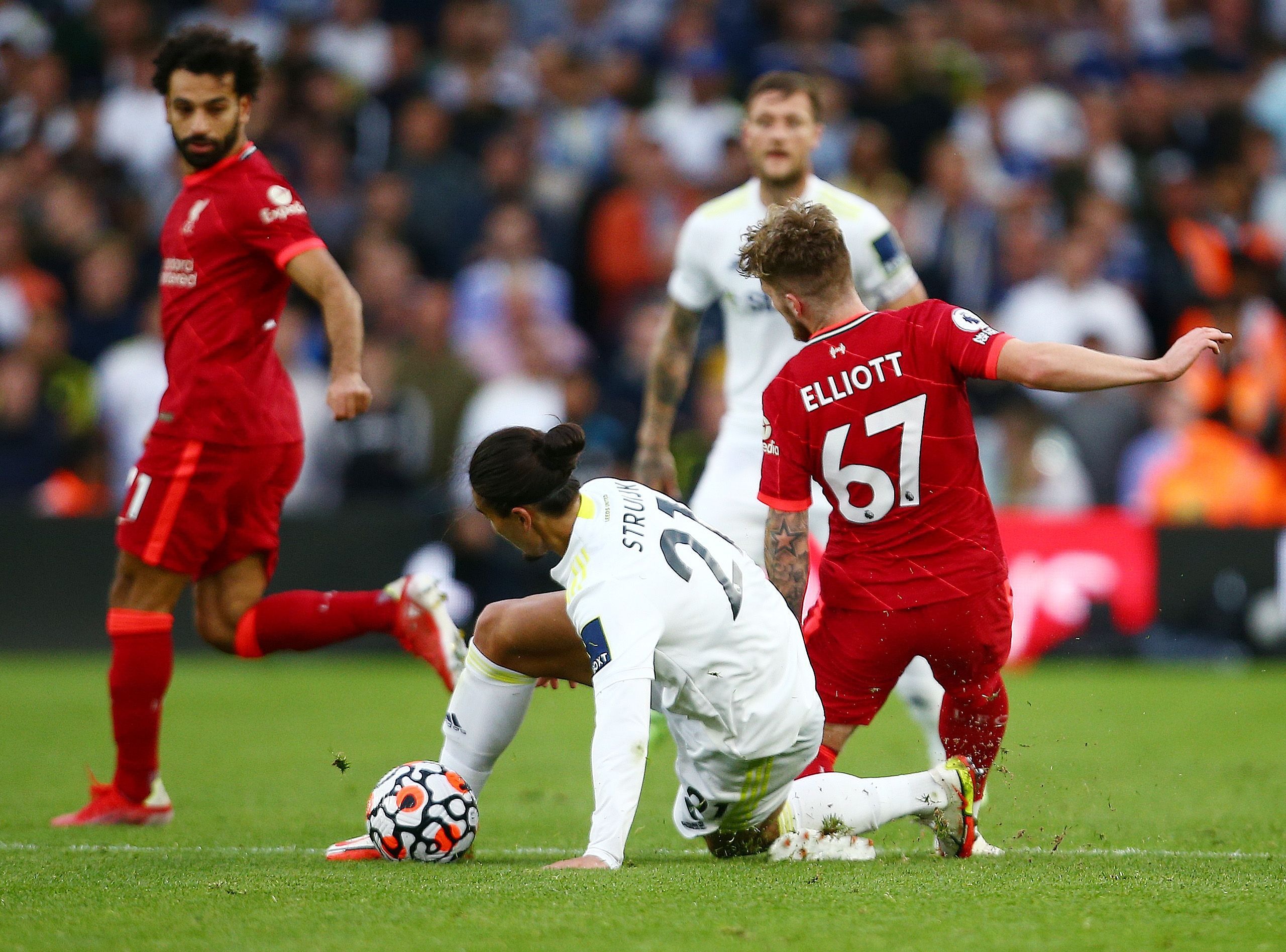 A clean sheet, up into the top four, five consecutive away wins, 14 unbeaten and a reminder to Chelsea and the two Manchester clubs that they are here to stay.

And while all of that stands, this trip to Elland Road will be remembered for all the wrong reasons following Harvey Elliott’s sickening injury.

In his breakthrough season, the teenage midfielder, 18, looks at home in the Reds midfield and had the world at his feet.

Now, with a suspected broken ankle, a lengthy spell on the sidelines beckons.

But as play temporarily carried on the nearby Salah and Klopp knew it was bad and waved and screamed like mad men. 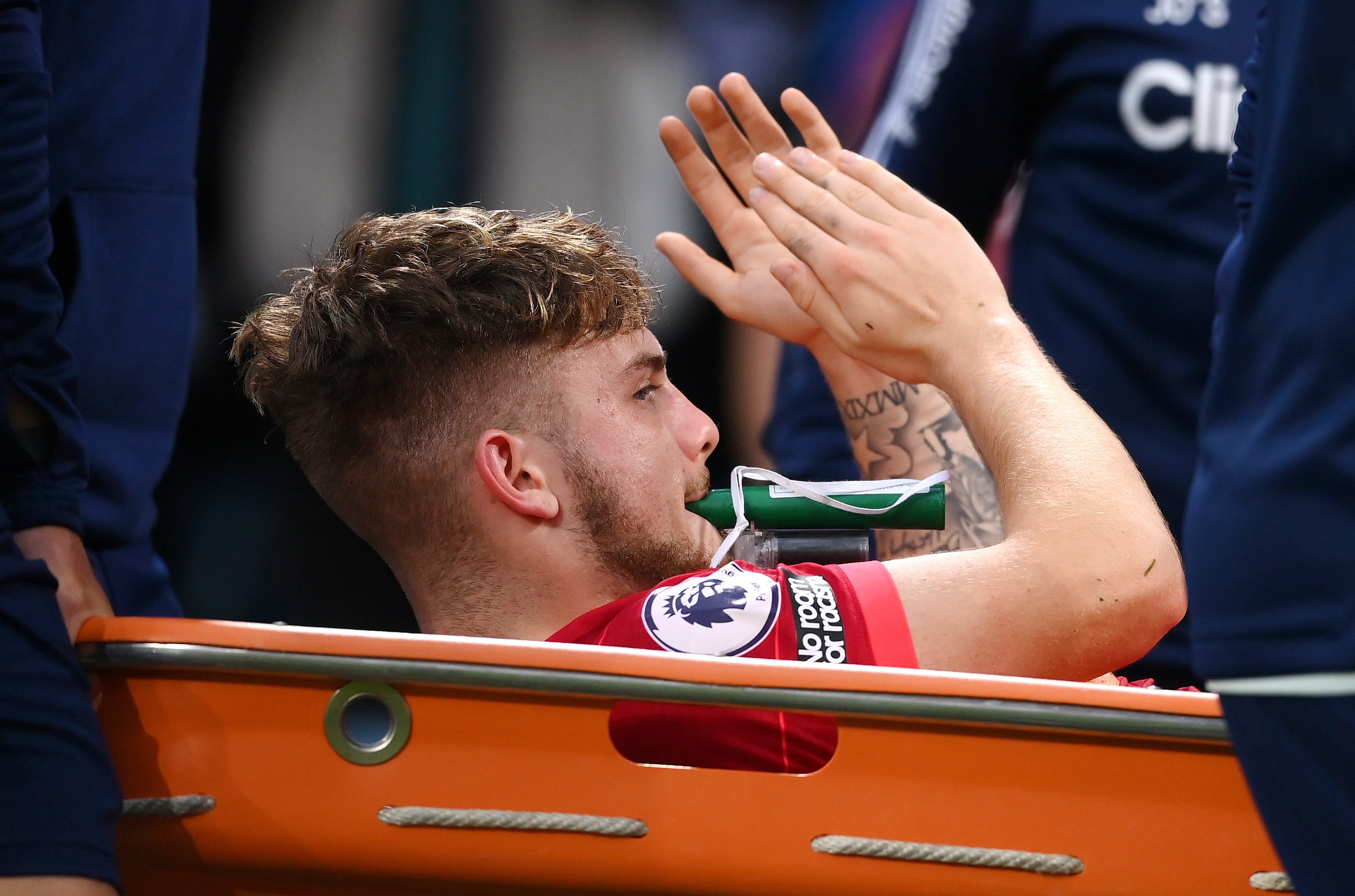 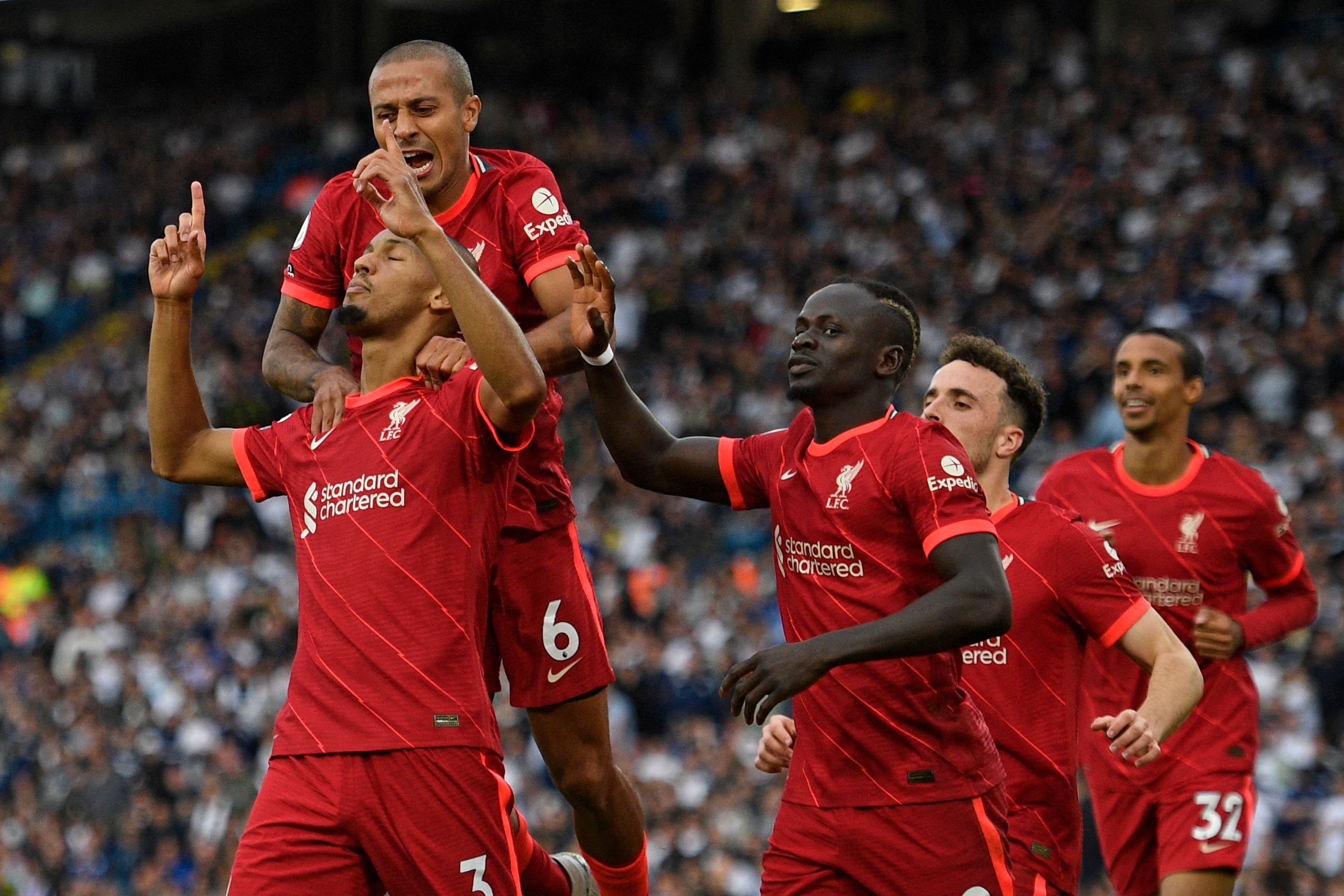 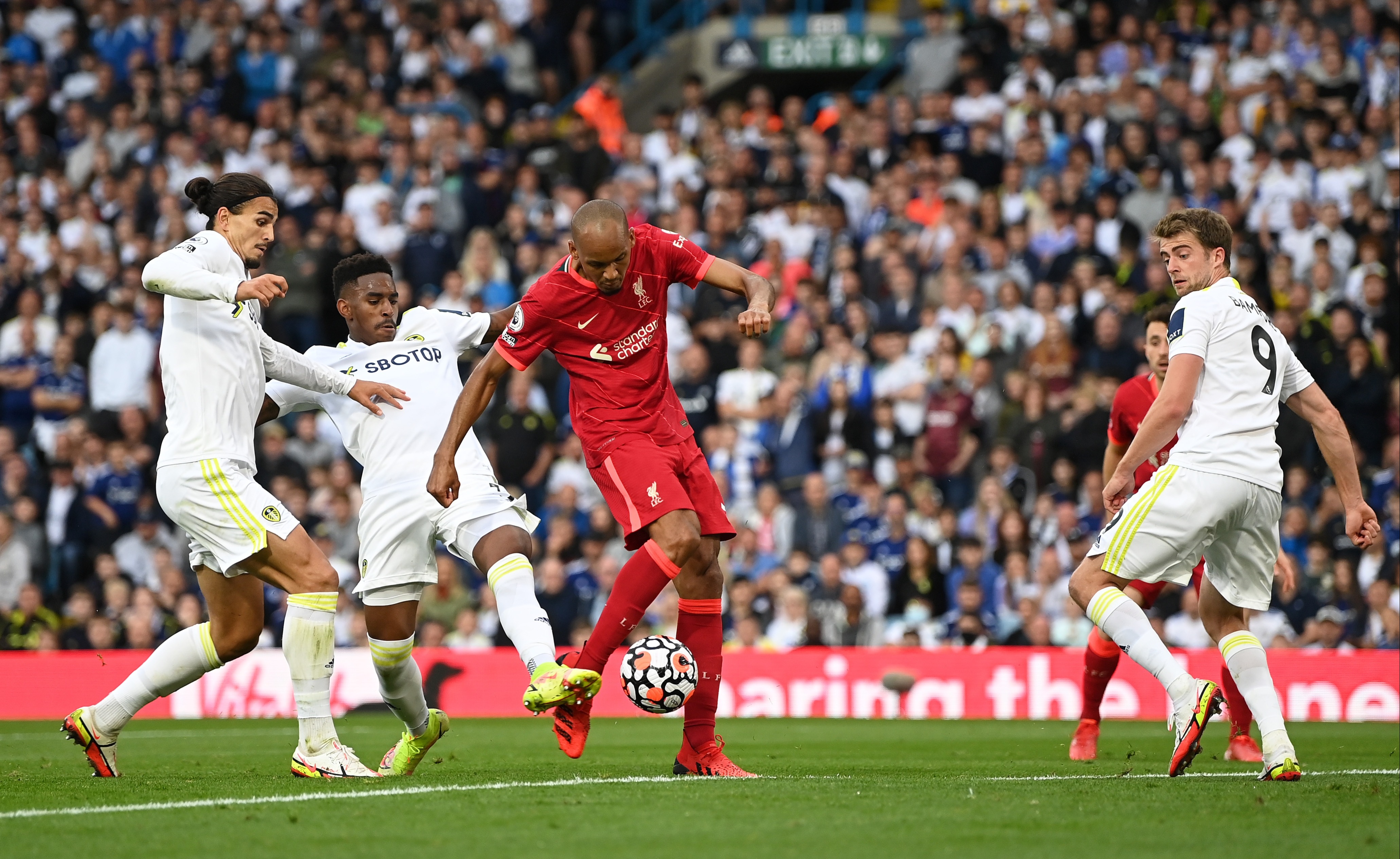 Elliott, clutching his left leg, writhed in agony and the physios were on like a flash.

As Struijk slid in to win the ball, his trailing leg caught Elliott high up on his left calf, and the Dutch defender was shown red.

After a lengthy stoppage Elliott was eventually stretchered off.

And if there is any good news it is that he was stable enough to applaud the clapping Leeds fans and post a picture of him inside an ambulance with his thumbs up on Instagram.

For Leeds, wide open all game, the first time they have failed to win any of their four opening top-flight games since 1958-59.

Two points from four games is hardly the time to panic, but it’s hard now not to start thinking of that old chestnut second-season syndrome.

Marcelo Bielsa’s side will always create chances, just as they did here, but if anything they are getting worse at defending – if that was possible.

Their new £25million signing Dan James started on the bench, with Brazilian winger Raphinha on the right wing having been cleared to play after the club v country row.

Jurgen Klopp also had his Samba contingent available and Alisson and Fabinho were both in while Roberto Firmino missed out through injury.

Before the game the German said he was ‘excited’ about stepping into a packed Elland Road cauldron for the first time.

But with all four corners bouncing like few other stadiums do, Rodrigo really should have had Klopp seeking the nearest exit seven minutes in but shot a weak shot straight at Alisson.

If Liverpool were shaken then it didn’t last long – with Salah bringing up his century 20 minutes in.

The Egyptian may have been the most hated man inside Elland Road after a trademark tumble early on, but he was also the best.

An exquisite dinked through ball had Diogo Jota in, only for the Portuguese to get a weak shot away.

The 30th player to join the Prem’s hundred club, he is the second African after Didier Drogba and the fifth-quickest to achieve it behind Alan Shearer, Harry Kane, Sergio Aguero and Thierry Henry.

Leeds were creaking, especially down their left, with new left-back Junior Firpo given an absolute roasting.

Jota skinned him soon after the opener and put it on a plate for Mane at the back post, but the Senegalese star somehow ballooned over from three yards out.

The Reds were cutting through Leeds at will and Klopp would have been livid they were not out of sight at the break, with Harvey Elliott and Mane again going close.

Second best by a distance, Bielsa’s boys really should have levelled up on the stroke of half-time but right-back Ayling spooned Jack Harrison’s deep cross over on the volley when it was crying out for a header.

The Argentine hooked Rodrigo for Tyler Roberts at the break but Leeds were 2-0 down after 50 minutes.

Mane first missed another sitter, unable to get a shot away when one-on-one, only for Pascal Struijk to get a foot in to deny Salah an open goal.

Virgil van Dijk nodded the resulting corner into Fabinho’s path but the midfielder completely missed his first attempt before getting a second bite at the cherry and burying beyond Illan Meslier from six yards.

And it went from bad to worse for the hosts when sub Struijk – on in the first half for the crocked Diego Llorente – was sent off.

After Elliott was stretchered off with 30 minutes remaining, Mane managed to butcher two more guilt-edged chances.

But he finally found his range at the death, receiving it from the unselfish Thiago on the left before spinning Liam Cooper and burying.

Celebrations were muted however, with Liverpool’s players still reeling from the horror that befell Elliott. 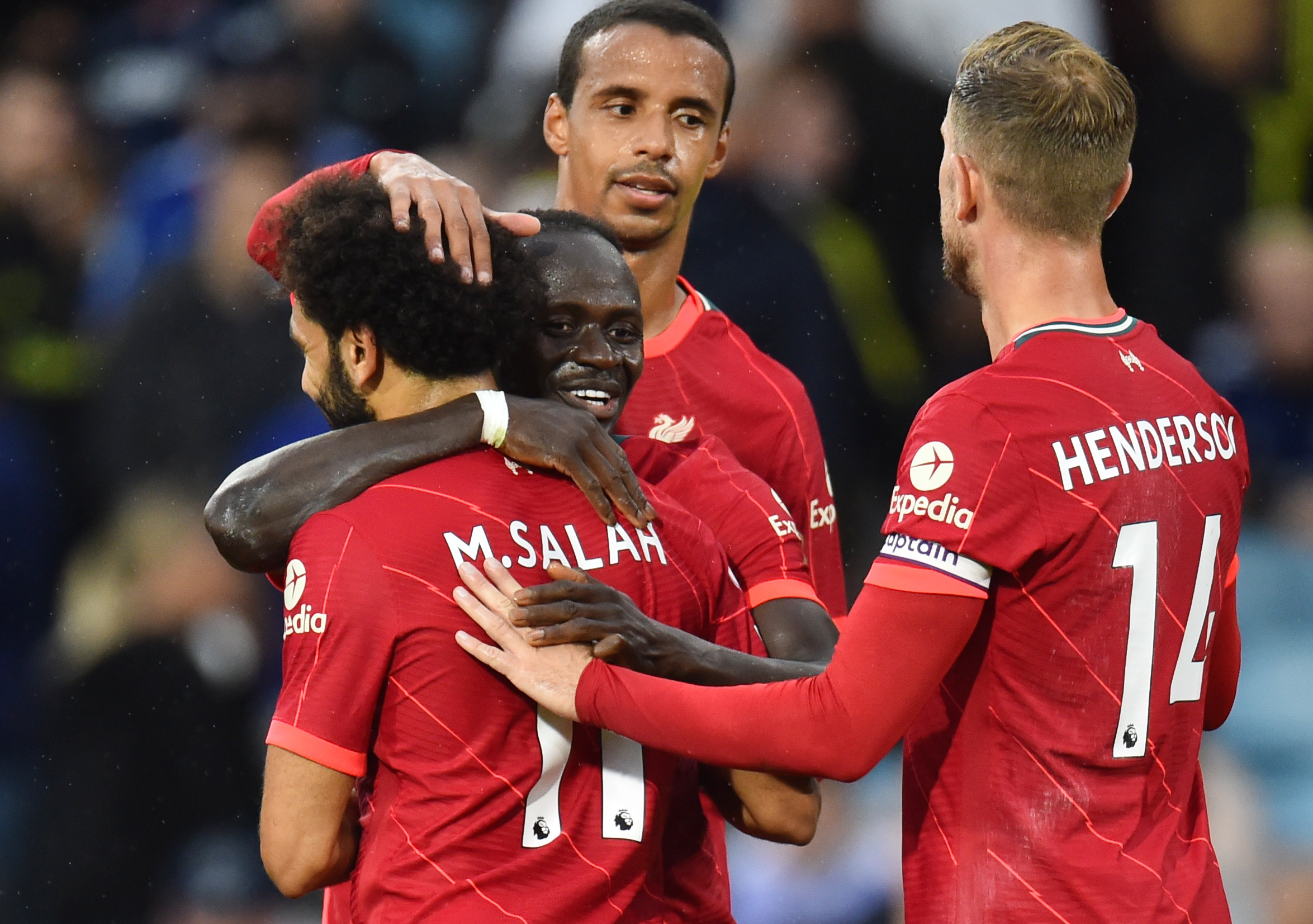 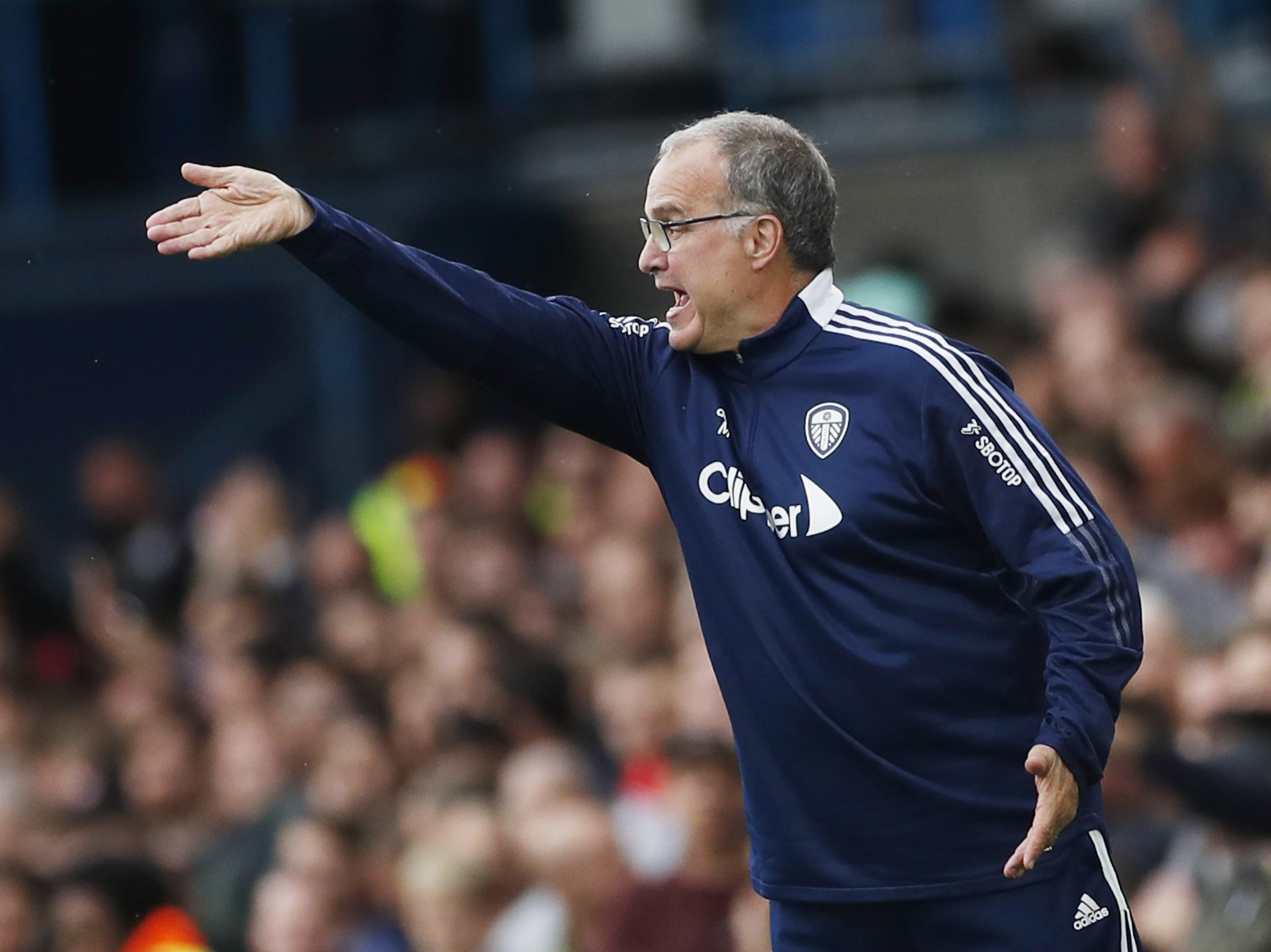 If the Bucks want to win these Finals, this is the change they need to make

Cheltenham bets: Get £110 in FREE BETS for Cheltenham on day three