MANCHESTER CITY celebrated a massive goal which had Made in Portugal written all over it – as Pep Guardiola's boys showed Cristiano Ronaldo isn't the only show in town.

Bernardo Silva cashed in when a shot from his fellow Portuguese international team-mate Joao Cancelo crashed off Caglar Soyuncu. 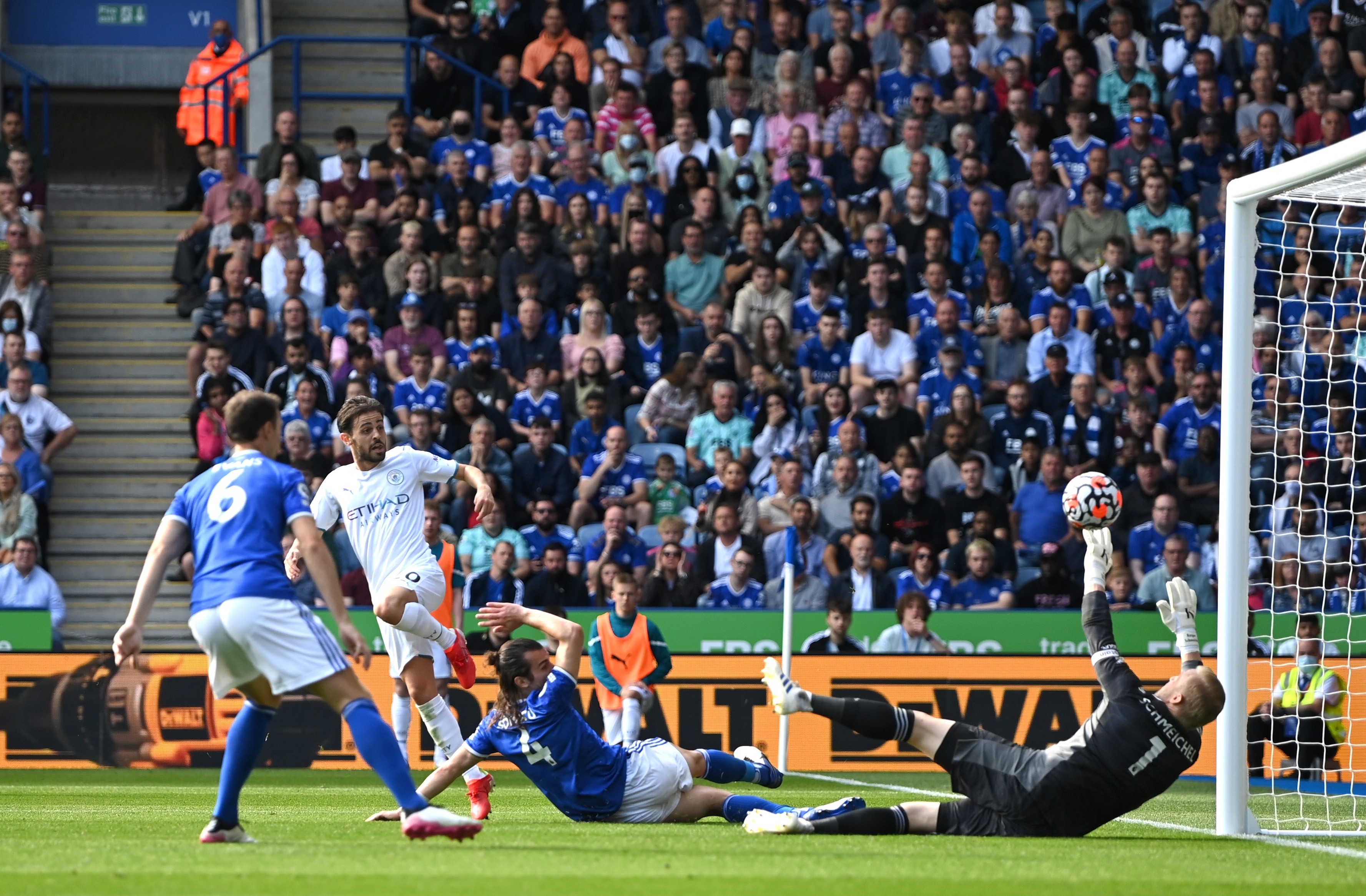 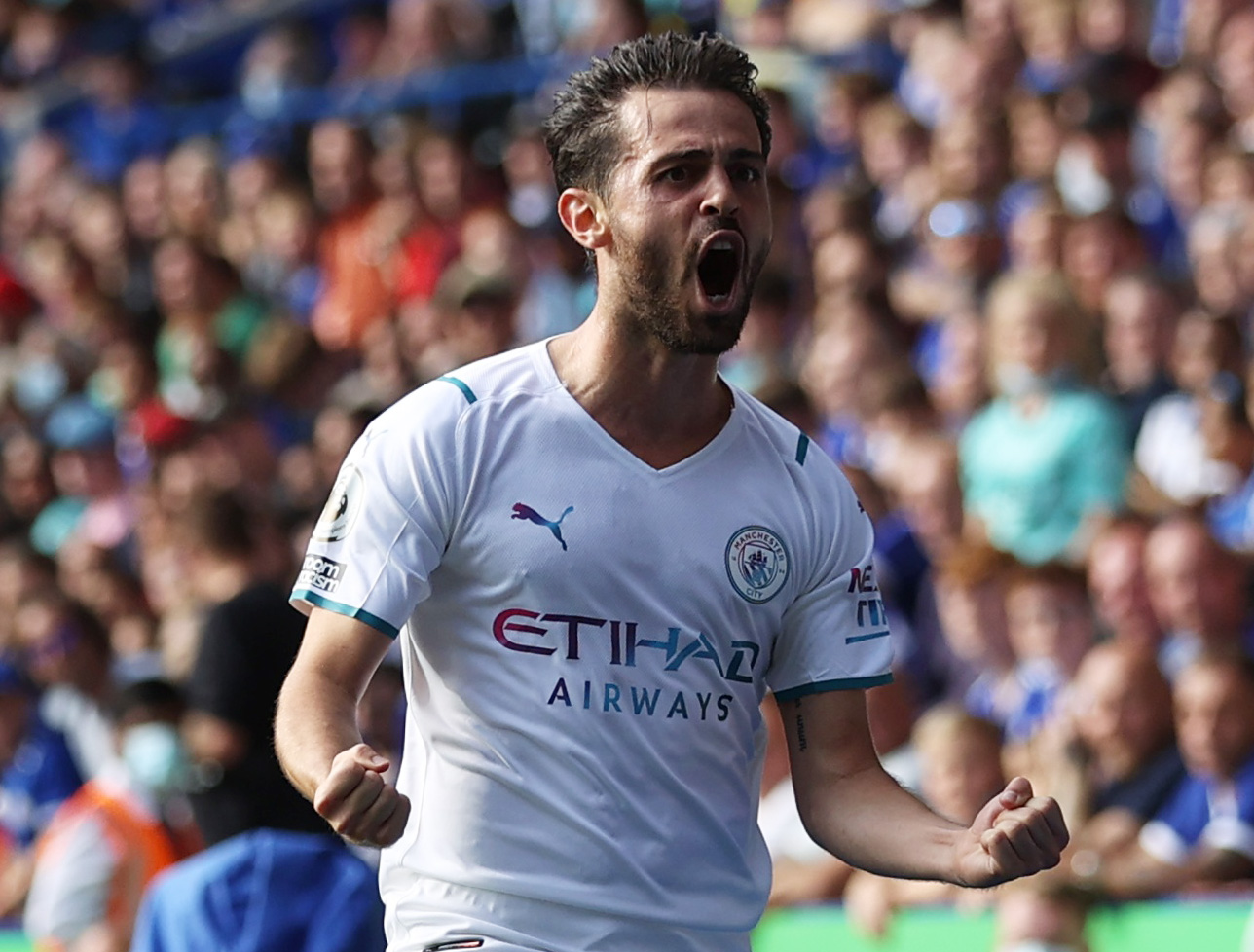 It's strange to think that if City had succeeded in prising Harry Kane away from Tottenham this summer, Bernardo was the most likely candidate to head for the exit, with a move to Spain on the cards to partly fund the deal.

So it's no wonder he celebrated as he flew the Portuguese flag for the sky blue side of the city to grab one or two headlines from his pal on the red half.

This was a breathtaking 90 minutes which rattled from end to end for 90 glorious minutes as City gained revenge for their Community Shield defeat.

Perhaps City's players glanced up at the King Power's giant video screens prior to kick-off and saw Leicester's footage of their recent success at Wembley.

But something certainly motivated Pep's champs because they came out of the blocks at full pace and pinned the Foxes back from the start.

However, their hosts dug in and defended their territory doggedly and will point to a Harvey Barnes' header which bounced off the bar and a Jamie Vardy goal which turned out to be fractionally offside as evidence there wasn't much to choose between these two foes.

Brendan Rodgers' men rode their luck early on when Jack Grealish combined with Silva to clip in a cross which Fifa-cleared Gabriel Jesus met with a power header before Schmeichel blocked.

It set the tone for a manic game that sped from end to end.

Youri Tielemans sent Vardy sprinting off down the right and he centred perfectly for Barnes who slid in for the kill.

However, the winger's effort was heroically blocked by Ederson with the help of Kyle Walker, even though the Brazilian keeper took a bloody nose for his bravery.

Schmeichel was just as good at the other end as he got down low to his left to touch away a Bernardo shot after Ryan Bertrand had dithered in possession.

Grealish then fired over from a good position after Ilkay Gundogan spotted him in space after Leicester let their concentration slip at a free-kick.

As the play raged on Rodri was booked for a foul on Tielemans before Jesus failed to beat Schmeichel with two attempts as the keeper came out on top again.

Vestergaard defended heroically again to block a Ruben Dias attempt as City stepped up the pressure before the break.

But it was Leicester who came so close at the start of the second with a lightning raid which saw Vardy provide a perfect cross from the right which picked out Barnes.

The winger's powered header beat Ederson but bounced off the top of the bar and over. 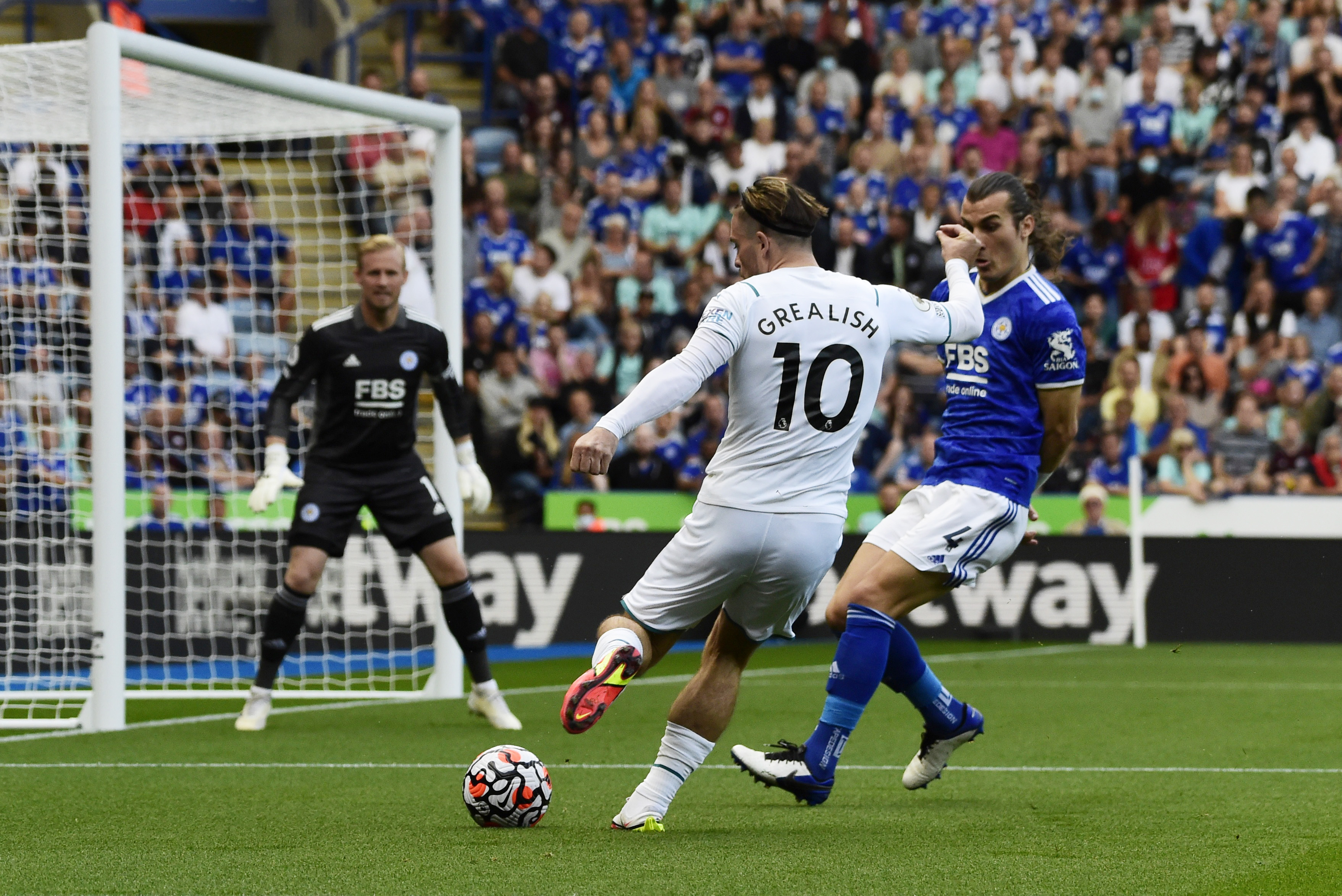 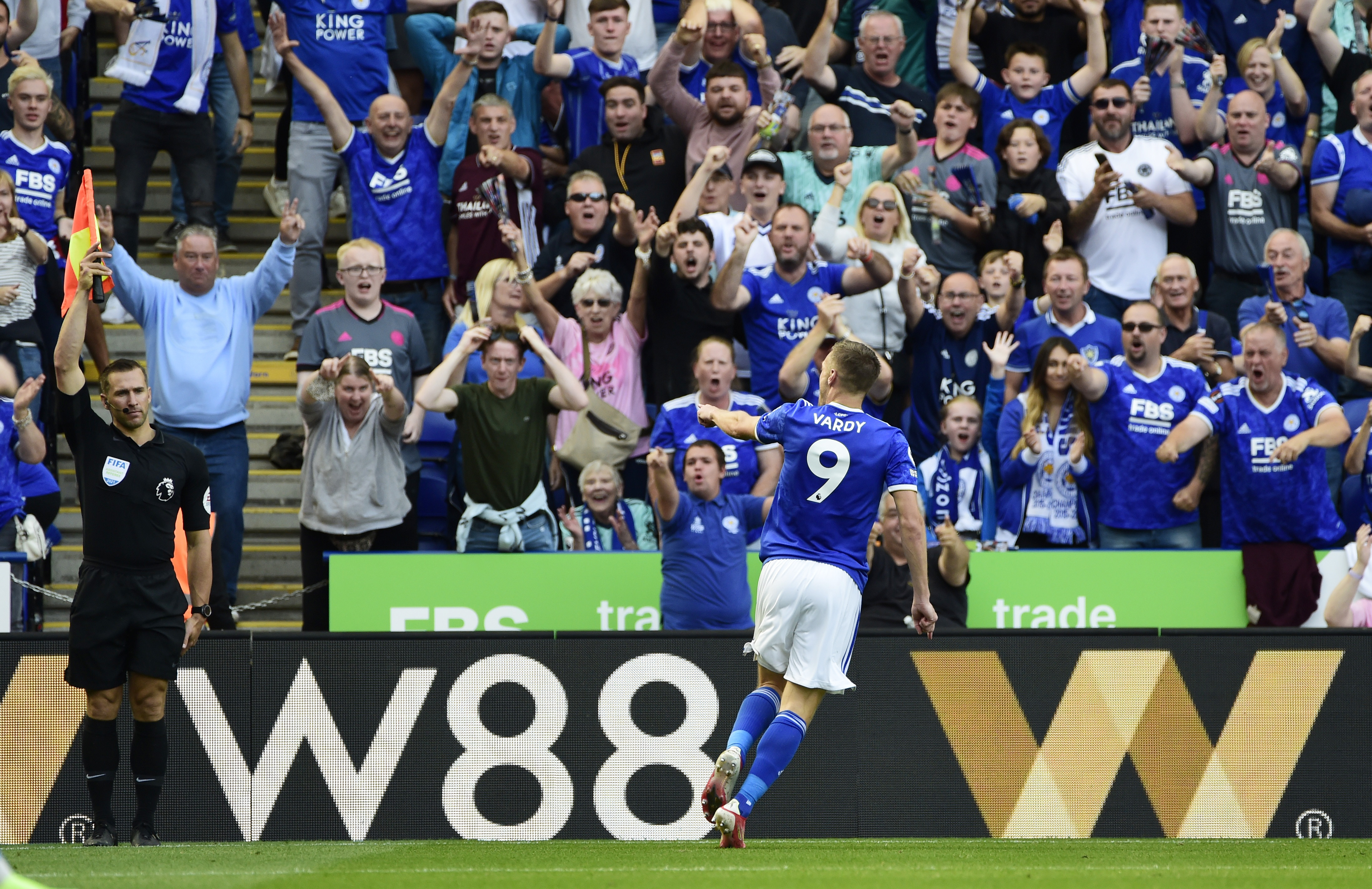 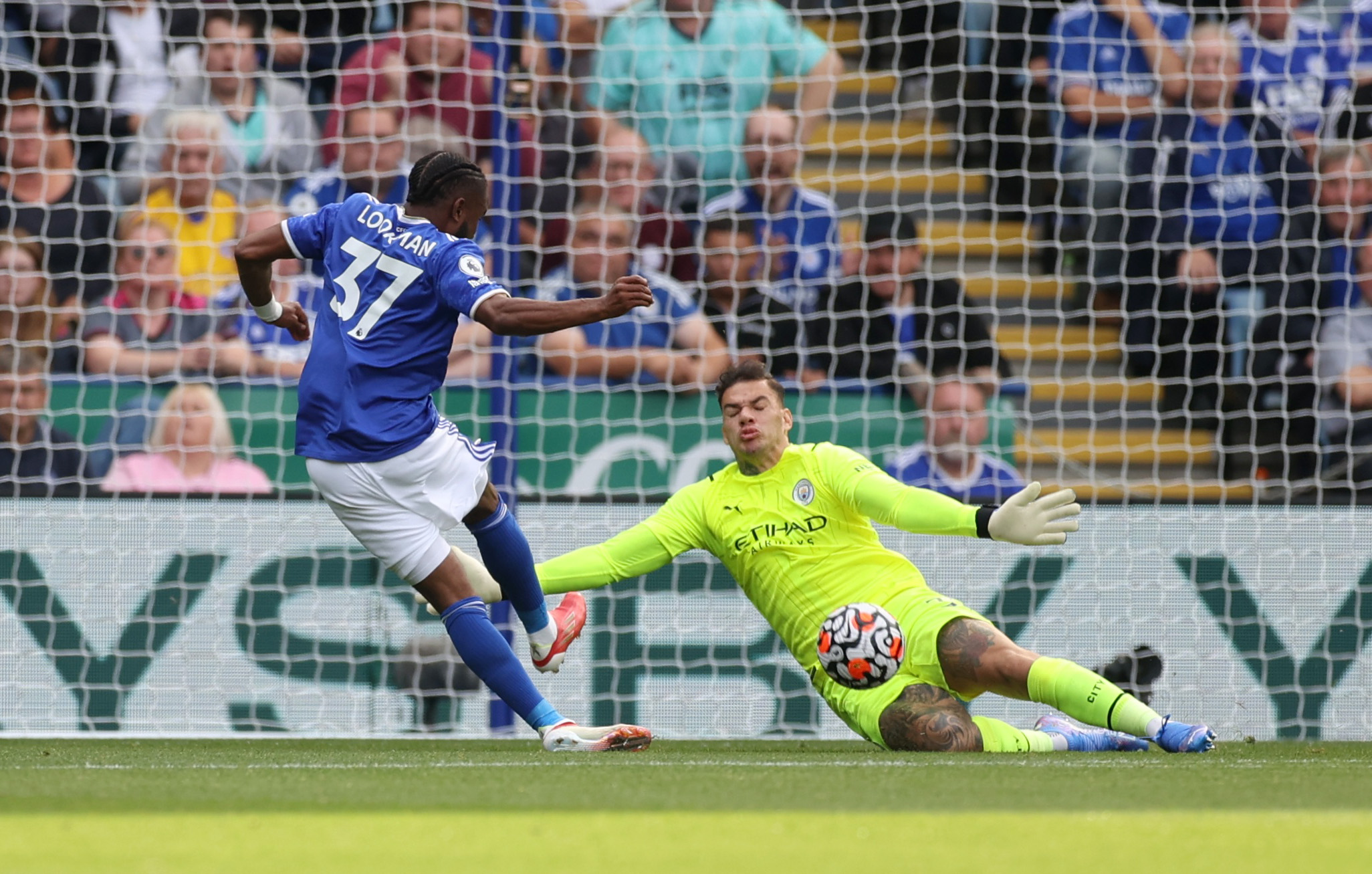 The home side smelled fear and Vardy had the ball in the net a couple of minutes later after City were suckered by another lightning attack.

However, despite Vardy rounding Dias then Ederson to roll the ball into the net, VAR rescued City as it was confirmed the striker had just strayed offside.

However, City aren't champions without good reason and they swiftly stepped through the gears again.

Ferran Torres rippled the side netting just before Rodgers sent on comeback defender Jonny Evans on for a weary Vestergaard on the hour.

The full-back rifled in a shot that ricocheted off Soyuncu and Bernardo pounced to ram the rebound into the roof of the net.

City fans spilt over some barriers as they celebrated and stewards and police moved in.

But it was the breakthrough Pep's boys needed as they finally broke through the thin blue line.

Rodgers sent on new signing Ademola Lookman and Kelechi Iheanacho while City replaced Torres with Raheem Sterling and then Jesus with Fernandinho.

Then Dias thwarted Lookman with a stunning recovery challenge to deny him a late leveller.

But City had the last word as Fernandinho flashed an angled shot just wide and Grealish also passed up a good late chance.