There is plenty that catches the eye when watching Lindsay Allen play basketball.

The Melbourne Boomers point guard has shown this season she can do anything on the court from scoring to passing, she is top five in both points and assists, to also playing good defence and making pressure plays.

But to more experienced WNBL observers what really puts her in an elite class is how she reads the game and reacts to what's in front of her. 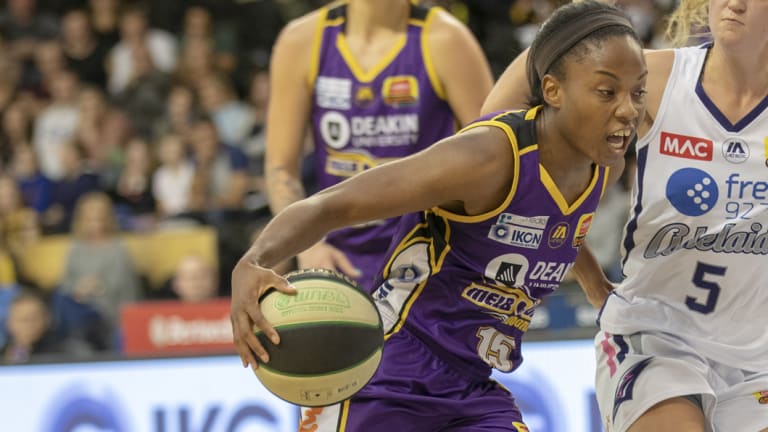 Boomers captain Jenna O'Hea was away with the Australian Opals for much of pre-season but when she got back and started working alongside the WNBA playmaker, her decision-making stood out.

"Her vision and her feel, her reading of the game is terrific and to play with a point guard like that is a lot of fun," O'Hea said earlier this season.

"If you are open you are going to get the ball.

"I've always felt that passing is very contagious and when you have a point guard who finds the open player then you know you are going to touch the ball so you don’t have to force shots up.

"That's contagious throughout the whole team and it's only going to get better."

O'Hea knows the WNBL as well as anyone and she thinks there isn’t anyone who can keep Allen in check.

"She has been doing it all for us," O'Hea said.

"I don’t think anyone in the league can stay in front of her and stop her."

The Boomers went into this past off-season keen to find a world-class import point guard to steer their team around the court, when Allen's name came up they quickly moved to lock her in.

The 23-year-old starred at Notre Dame in US college basketball captaining her team and in two WNBA seasons she has stood toe-to-toe with the best in the world.

The majority of WNBA players play overseas during the US winter and Allen said the short WNBL season and her Boomers teammates made the experience a great one.

"At times I forget I’m living in Australia, I think I'm back in America," Allen said.

"Then I realise I'm driving on the other side of the street or someone speaks and I know I'm in Australia. That speaks to how comfortable I've been so far.

"It's been beyond anything I could have imagined both on and off the court, it has been awesome experience."

Allen has had a whirlwind start to her first Australian season with the Boomers being without four of their starters for key parts of pre-season due to FIBA Women’s World Cup commitments then enduring a hectic November schedule of eight games in 23 days.

Despite those challenges, Allen has relished the chance to play in such a tight league.

She has averaged 18 points and five assists per game, while the Boomers have posted a 9-4 record going into their game with Sydney University Flames at the State Basketball Centre on Saturday.

"I feel like it has flown by," Allen said.

"It still feels like I haven't been here that long. It's such a short season but that makes it even better. Every game matters and playing every team three times makes winning every series important."

The Boomers had a secondary motive for signing Allen as they hoped her experiences would help boost the development of emerging guard Monique Conti, but Allen said she was learning just as much from Conti.

"We both challenge each other and guard each other every day at practice," Allen said.

"Being from America and having the experience that I have over a younger player like Mon and I think she is learning from that, but it's me learning from her from the years she has had in the WNBL as she is often teaching me a few things about how I should adjust.

The Boomers know they will need to make more strides if they are to compete for this season’s championship with the finals a little over six weeks away.

"We always knew we would never be our best selves in October," Allen said.

"Our goal is to continue to get better, it's really cliche but there is so many things we can improve on and things we see on the court as we get to know each other even more.

"With more games, more practices we will be able to do that and hopefully reach our peak in the play-offs."