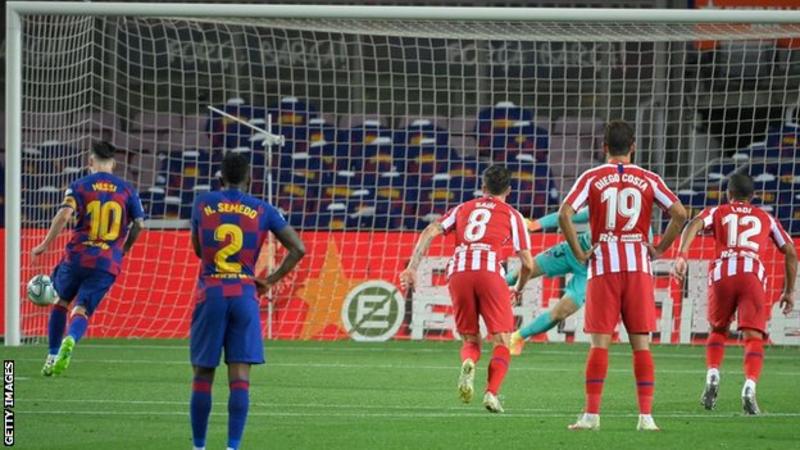 Lionel Messi scored the 700th goal of his career with a ‘Panenka’ penalty in Barcelona’s La Liga draw with Atletico Madrid on Tuesday.

The Spanish giants’ all-time top scorer hit the landmark goal for club and country by gently chipping the ball into the net as Jan Oblak dived the wrong way.

The goal had put Barcelona 2-1 up but Atletico hit back to draw 2-2.

Barca remain second, one point behind Real Madrid, who have a game in hand.

Messi’s penalty was also his 630th goal in his 724th appearance for the club.

The Argentina star played a part in the opener for Barcelona when his whipped corner hit Diego Costa and deflected into the back of the net.

Former Chelsea striker Costa had the chance to make amends soon after when Atletico were awarded a penalty after Yannick Carrasco was fouled inside the box.

Costa stepped up to take the spot kick only to see it saved by Marc-Andre ter Stegen, but it had to be retaken as the Barcelona goalkeeper had come off his line early. This time, Saul Niguez sent Ter Stegen the wrong way.

Messi restored Barcelona’s lead and reached his career milestone with his cheeky ‘Panenka’ – named after Antonin Panenka’s famous penalty for Czechoslovakia in the final of Euro 76 – but Niguez equalised again with another penalty.

Another year, another milestone for Messi.

His 700th career goal – coming just over 14 months after netting for the 600th time for Barcelona – means he joins a select group.

According to data from Rec.Sport.Soccer Statistics Foundation, Messi is now one of seven players to have reached the 700-goal mark in their career.

Czech-Austrian Josef Bican leads the way with 805 career goals, followed by Brazil legend Romario, who bagged 772, with his compatriot Pele third on 767. 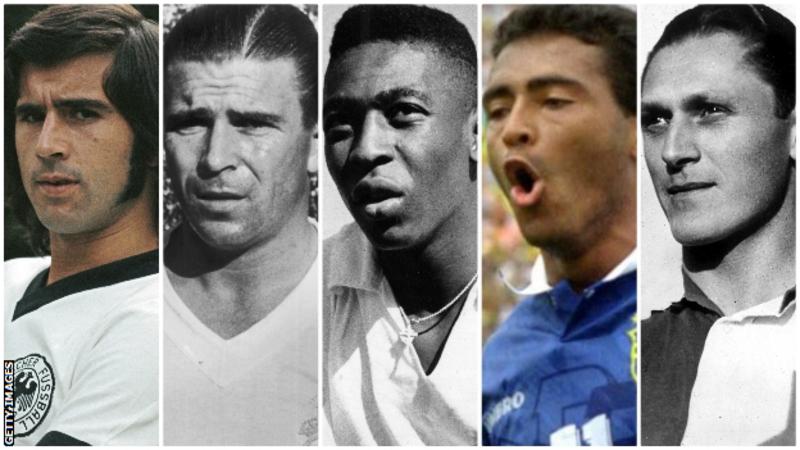 Messi’s great modern goalscoring rival, Cristiano Ronaldo, is the sixth man on the list, having reached 700 career goals with a strike for Portugal in a Euro 2020 qualifier against Ukraine in October last year. He has added a further 25 goals to his tally since then.

A model of consistency, Messi has scored more than 40 goals for club and country in each of the past 11 calendar years and more than 50 in nine of the past 10. So far in 2020, after a three-month disruption caused by the coronavirus pandemic, he has 11 to his name.

Of the 40 La Liga opponents Messi has faced during his career, he has only failed to score against three of them – Xerez, Real Murcia and Cadiz.

The majority of his goals have come from his left foot – 582 of them – with 92 coming courtesy of his right.

Not the biggest of players, nor one who has operated in a side reliant on crosses into the box, only 24 of his 700 goals have come from a header.

Most come from efforts inside the box (580), with 120 originating from outside the penalty area.

Santiago Arias (Atlético de Madrid) wins a free kick in the defensive half.

Arturo Vidal (Barcelona) wins a free kick in the defensive half.

Attempt blocked. Álvaro Morata (Atlético de Madrid) right footed shot from the left side of the box is blocked. Assisted by Vitolo.

Attempt missed. Sergio Busquets (Barcelona) header from the centre of the box is too high. Assisted by Lionel Messi with a cross following a set piece situation.

Attempt saved. João Félix (Atlético de Madrid) right footed shot from outside the box is saved in the centre of the goal. Assisted by Renan Lodi.

Attempt missed. Arturo Vidal (Barcelona) right footed shot from outside the box is close, but misses to the right. Assisted by Nélson Semedo.

Arturo Vidal (Barcelona) wins a free kick in the attacking half.

Penalty conceded by Nélson Semedo (Barcelona) after a foul in the penalty area.

Renan Lodi (Atlético de Madrid) wins a free kick in the defensive half.

Clément Lenglet (Barcelona) wins a free kick in the attacking half.

Fall without Football: ‘There’s just no way’ to play amid the coronavirus pandemic without ‘high risk’