The Detroit Lions picked up their first win of the season in a thrilling nail-biter against the Minnesota Vikings on Sunday and after the game dedicated the victory to the victims of the Oxford High School shooting.

Lions players honored the victims with decals on their helmets while some players went above and beyond by wearing shirts with the Oxford football logo printed on them. Detroit safety Jalen Elliott wore the No. 42 coming into Ford Field but had the name Myre on the back for Tate Myre who was hailed a hero for trying to stop the gunman’s rampage in his school. 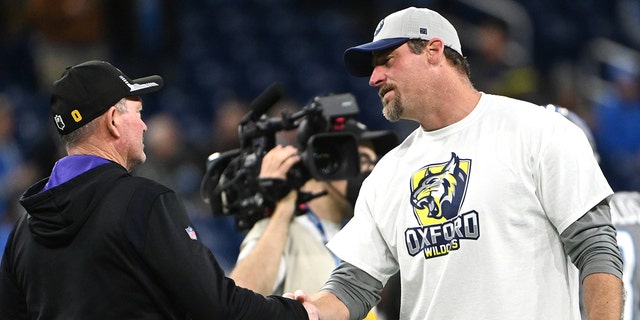 “I just wanted them to know exactly what we were going to represent today,” the emotional head coach said, via NFL.com. “The shirts, the hats, the decals, the people that are affected. Some of our players know of someone that was affected. To me, my thought was, ‘Hey, man, if we can, for three hours, just ease their suffering a little bit, that’s worth it.’ So, that’s kinda how I thought of this and we did a great job, players responded and played well.”

Jared Goff threw the game-winning touchdown pass to Amon St. Brown. He spoke about the Oxford shooting as well.

“You never hope for a tragedy like this, but you hope to be a light for those people and a positive thing that they can have fun watching,” Goff said. “I hope they were all watching today and were able to enjoy that win and we can take their minds off it for whatever it may be, three hours. I think any time that we can do that, it’s a lot bigger than our sport, it’s a lot bigger than us and I think today was one of those special circumstances that we were able to rise to the occasion and make something special happen.”

Tate Myre, Hana St. Juliana, Madisyn Baldwin and Justin Shilling were identified as the four students killed in the shooting. Several others were wounded. 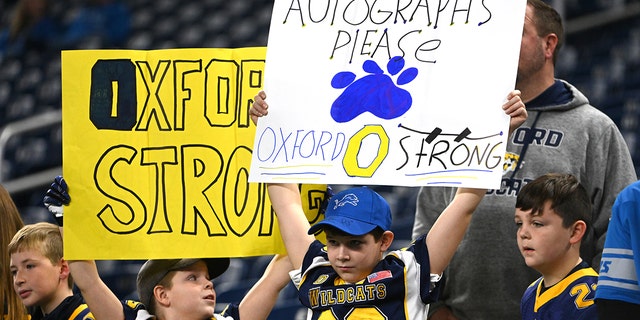 DETROIT, MICHIGAN – DECEMBER 05: Fans in the stands before the game between the Minnesota Vikings and Detroit Lions wearing jerseys and holding signs in support of those killed at Oxford High School football at Ford Field on December 05, 2021 in Detroit, Michigan.
(Nic Antaya/Getty Images)

Ethan Crumbley, 15, was arrested on terrorism and murder charges. His parents were later arrested on involuntary manslaughter charges.