Liverpool's push for a first English title in 29 years faces another test when they host Arsenal on Saturday (Sunday morning, AEDT), but the evidence suggests their formidable defence could be the key to ending a frustrating wait for a championship in the Premier League era.

The roar that swept like wildfire around the ground when Manchester City's defeat to Leicester City was confirmed on Wednesday told its own story – Anfield really is beginning to believe. 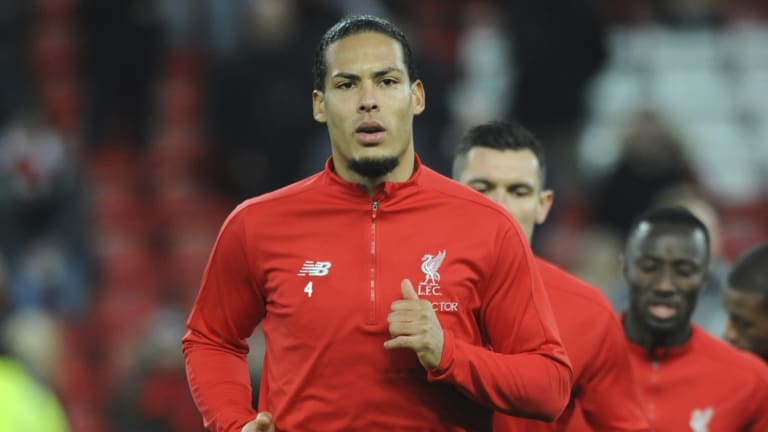 Leadership: Virgil van Dijk has added another dimension to Liverpool’s backline this season.Credit:AP

While Jurgen Klopp's unbeaten Liverpool were easing to a 4-0 win over Newcastle United to bring the dream of that elusive 19th English title into sharper focus, champions City were suffering a second straight defeat in less than a week.

So, at the halfway mark, the gap between Liverpool and City, who slipped to third spot, now stands at seven points – and a comparison between their defensive records offers one of the major reasons.

Liverpool, boosted by the signings of exceptional centre back Virgil van Dijk and goalkeeper Alisson, have conceded just seven goals in 19 matches this season, 16 less than at the same stage last term.

City, in contrast, have shipped 15 goals and will arrive at Southampton on Sunday without a clean sheet in their previous nine games in all competitions.

Liverpool's attacking prowess has been long admired, but full-back Trent Alexander-Arnold points to how it now goes hand-in-hand with defensive stability at Anfield, where they have won eight of their nine league games, conceding just two goals.

"We have kept a lot of clean sheets, especially at home. It's something we pride ourselves on as defenders and throughout the whole team.

"That's the foundation we've got to lay, then provide the balls for the attackers to go and do what they do best, scoring us goals."

Fifth-placed Arsenal were the last team to nick a point from Liverpool in a 1-1 draw at the Emirates last month, but Unai Emery's side have since lost their way, dropping seven points in their last three games on the road.

An error from Stephan Lichtsteiner cost Arsenal dearly as they were held to a frustrating 1-1 draw against Brighton and Hove Albion on Wednesday.

Arsenal were without four centre-back options at Amex Stadium and Emery will hope Nacho Monreal and Shkodran Mustafi return for the weekend's clash.

"We started the season with clean sheets, we conceded five goals in I don't know how many games. It was incredible how stable it was," Guardiola said.

"But right now we are conceding goals and it's one of the big issues. We have a specific quality of players.

"We have players to play with a ball and it's not a team built to just defend a lot of the time. But you have to make that effort to change that dynamic."

Tottenham Hotspur stepped up their title drive this week, scoring 11 goals while defeating Everton and Bournemouth to move into second place, and they could wrap up the year with a sixth straight league win when hosting Wolverhampton Wanderers on Saturday.

Manchester United caretaker boss Ole Gunnar Solskjaer will also look to continue his 100 per cent winning start as the Red Devils take on Bournemouth at Old Trafford on Sunday.

Why are Comoros playing left-back Chaker Alhadhur as goalkeeper in AFCON clash vs Cameroon?