And could his late contribution prove to be the key to the door for Pep Guardiola’s men to regain their Premier League crown? 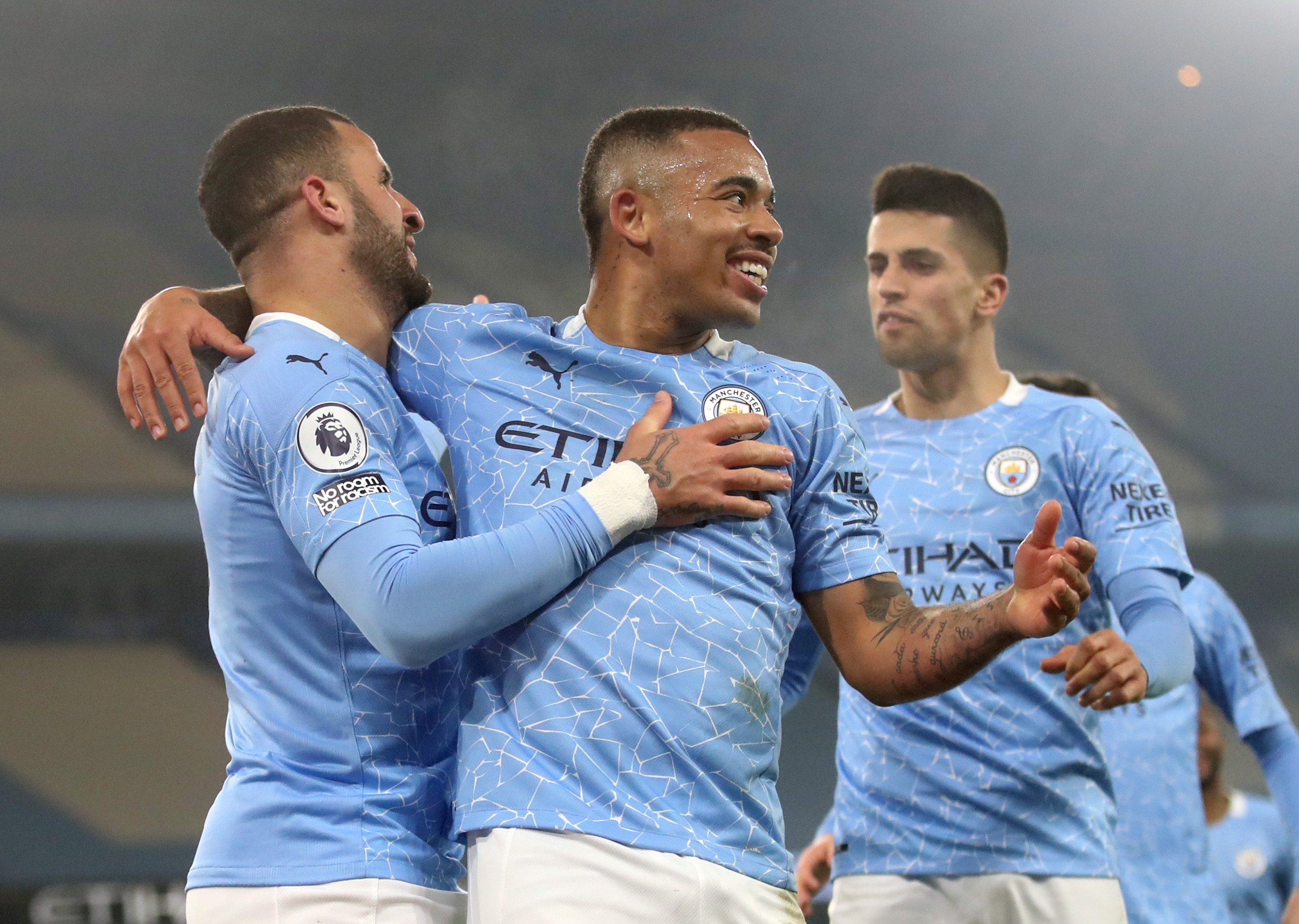 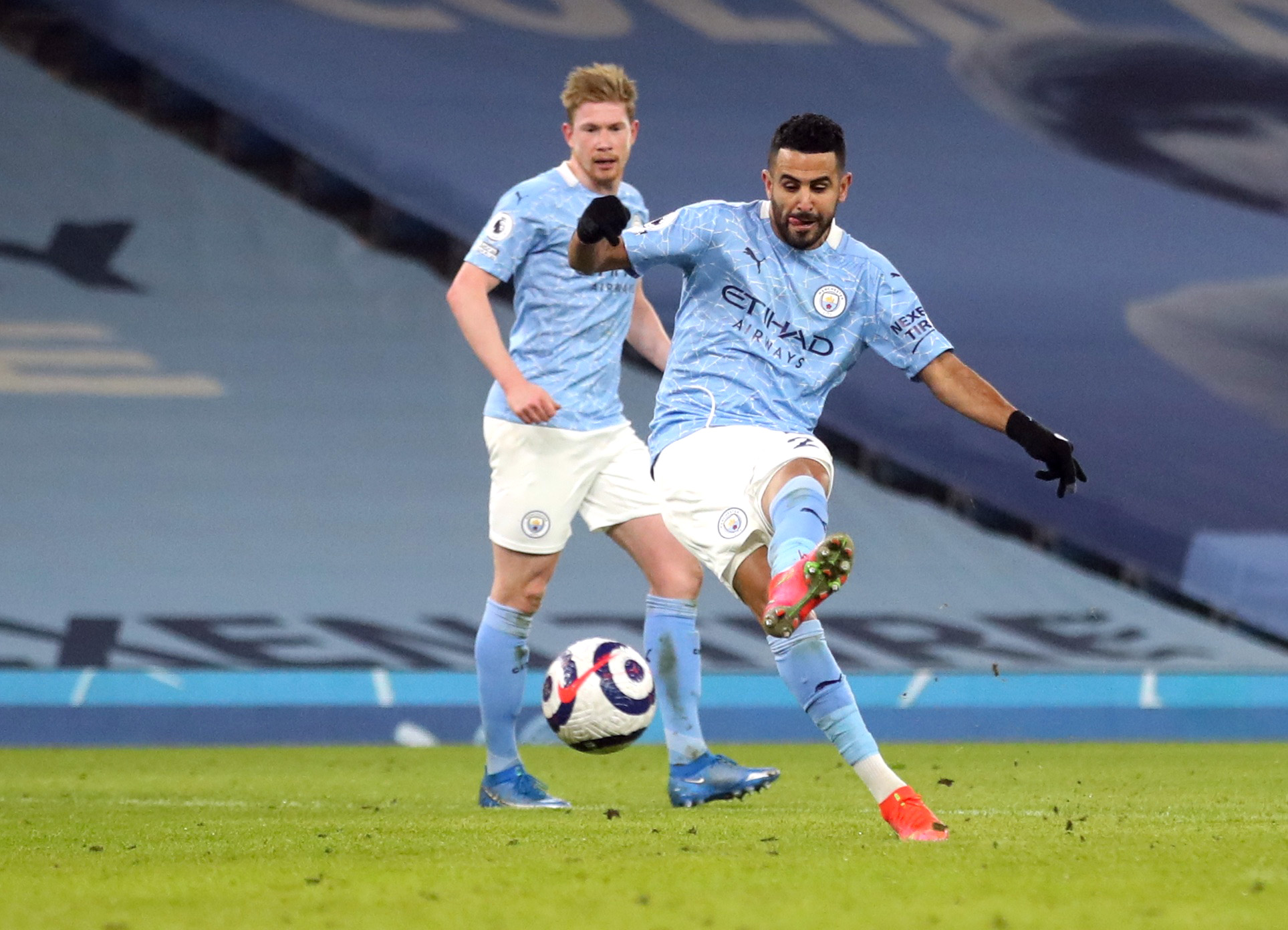 The champagne looked set to stay on ice with City’s incredible 20 match winning streak poised to end on 20 when Conor Coady equalised for Wolves in the second half.

But this team came of age as a Premier League team some time ago – and once again they proved their maturity with three late goals.

Jesus pounced 10 minutes from time after a Kyle Walker cross was not cleared – then wrapped things up with a late fourth.

City had equalled their club record by going 28 games unbeaten – and what a perfect way to prepare for Sunday’s derby.

If United fans were looking for a bit of hope, then they could think about the fact Wolves won on their last visit here – way back in October 2019.

In fact Nuno  Espirito Santo’s men did the double last season – but much has changed in the meantime.

They currently find themselves bang in the middle of the table – as close to the relegation zone as they are to the Champions League spots.

Even so Guardiola is wary of these opponents – and fellow Spaniard Adama Traore in particular. 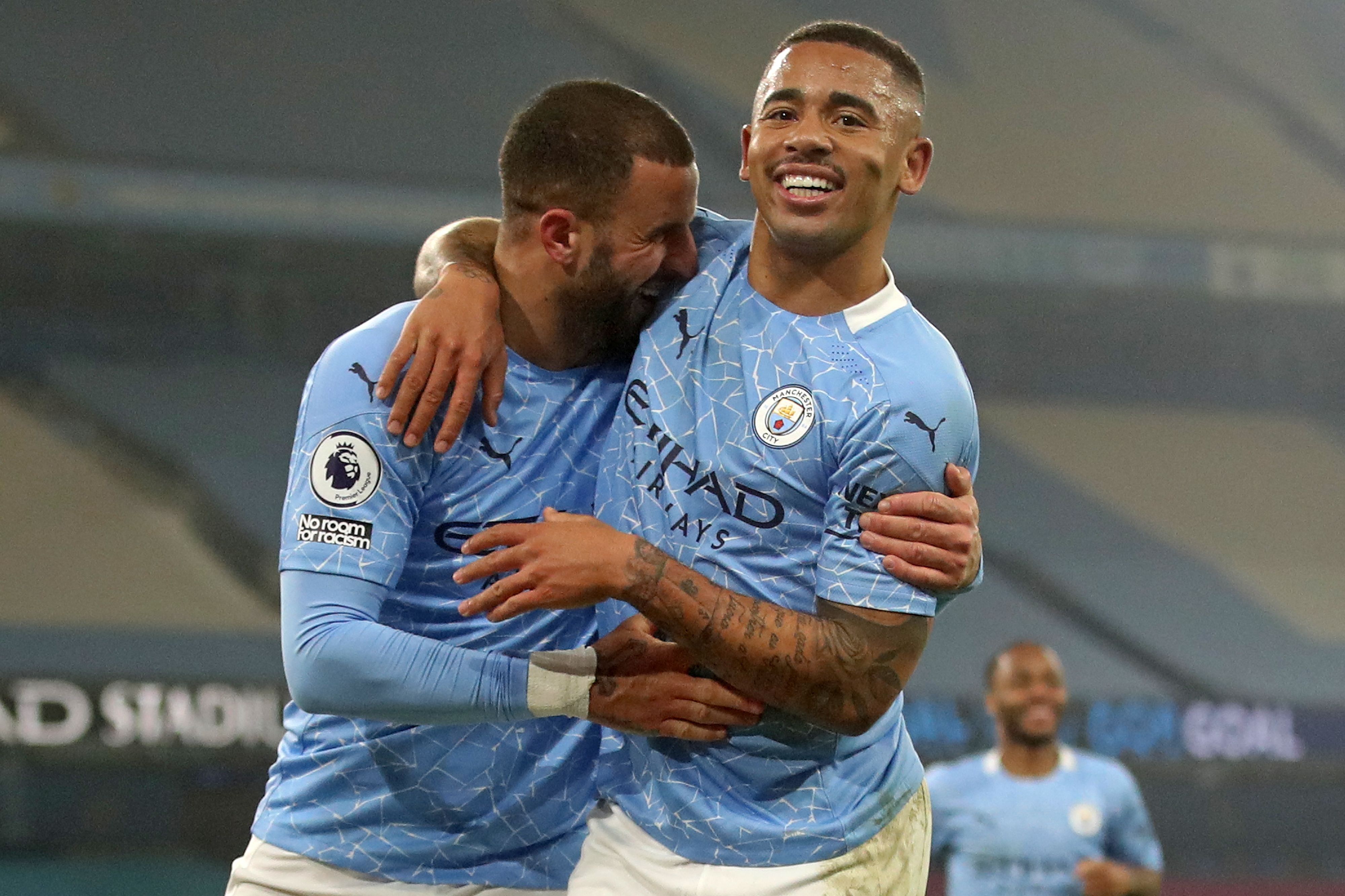 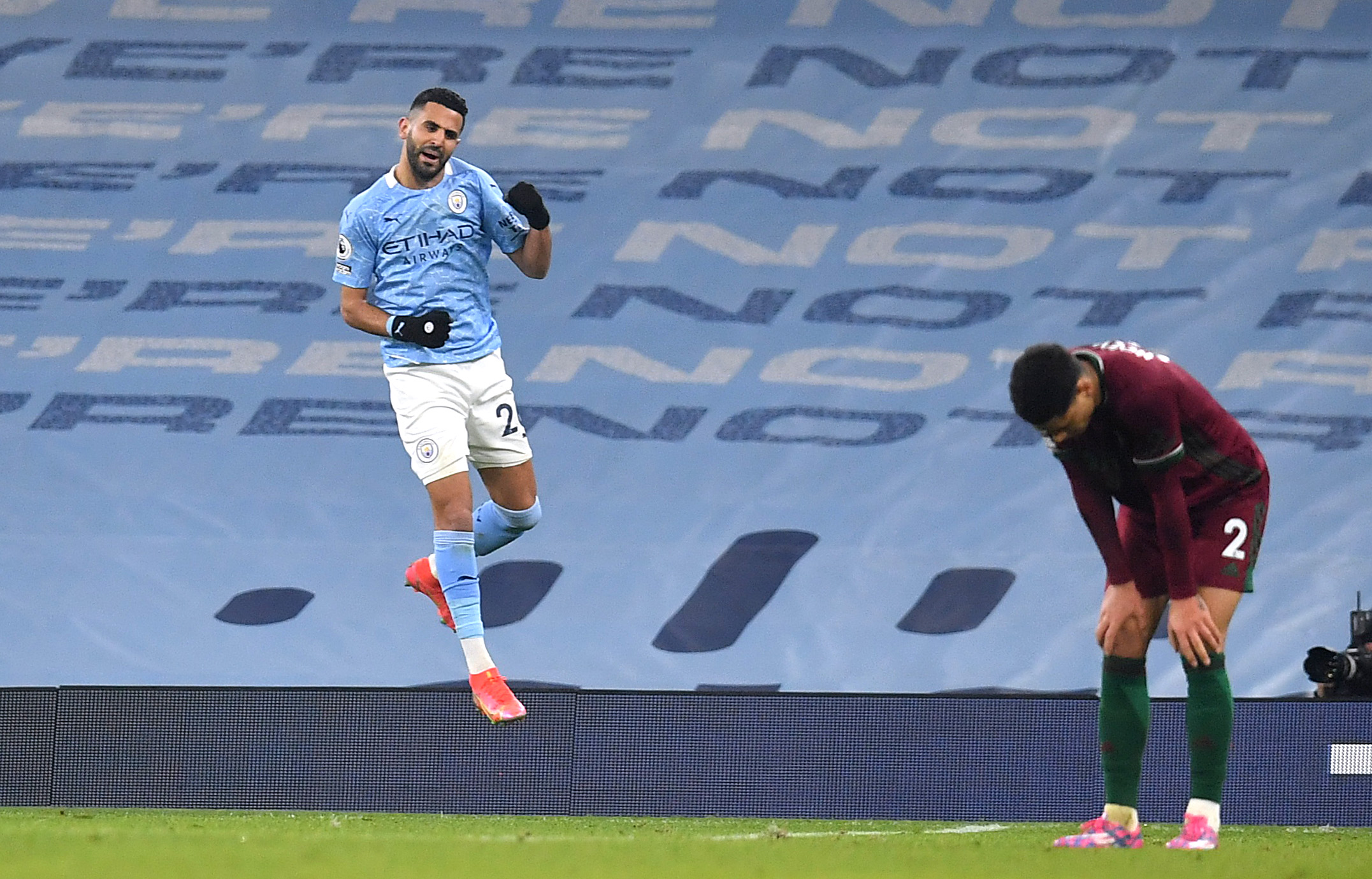 With eight Portuguese players starting the game – the most ever in the competition – it was a fair bet that one of them would be involved in the first meaningful action.

And it was Joao Cancelo whose clever pass found its way to Sterling whose angled shot was saved by the feet of Rui Patricio.

Romain Saiss then lost possession and it bounced into the path of Kevin de Bruyne but his effort was blocked.

But Wolves were already on the back-foot and it was no surprise when the opening goal arrived.

Rodri sprayed a pass out to Riyad Mahrez on the right and he brought it under control with his first touch before firing a cross over with his second.

Sterling’s eyes lit up but Wolves defender Leander Deondoncker got there ahead of him – and could only fire into his own net.

Going behind in matches is nothing new for Nuno Espirito Santo’s men – they’ve only scored first once since November. 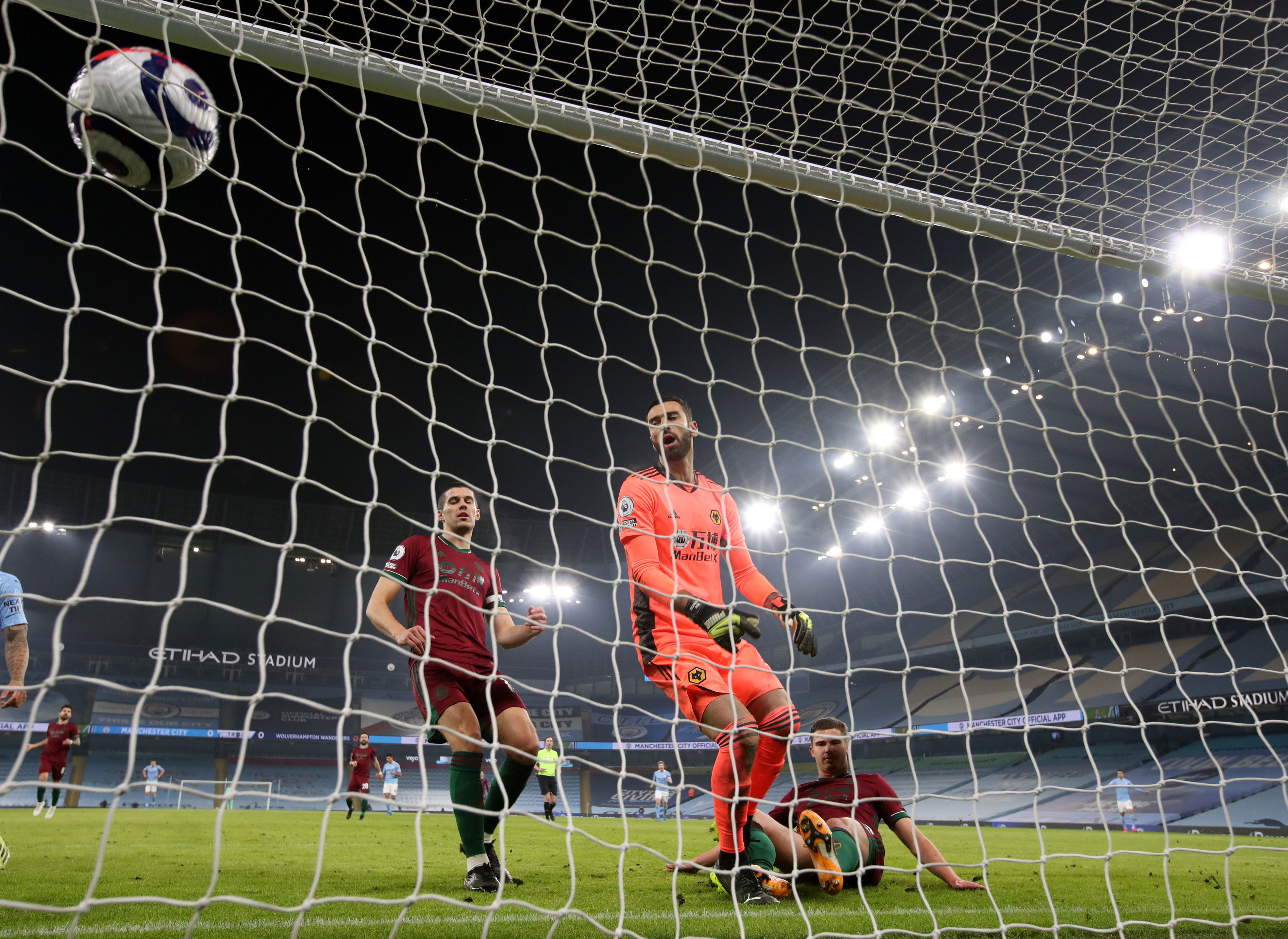 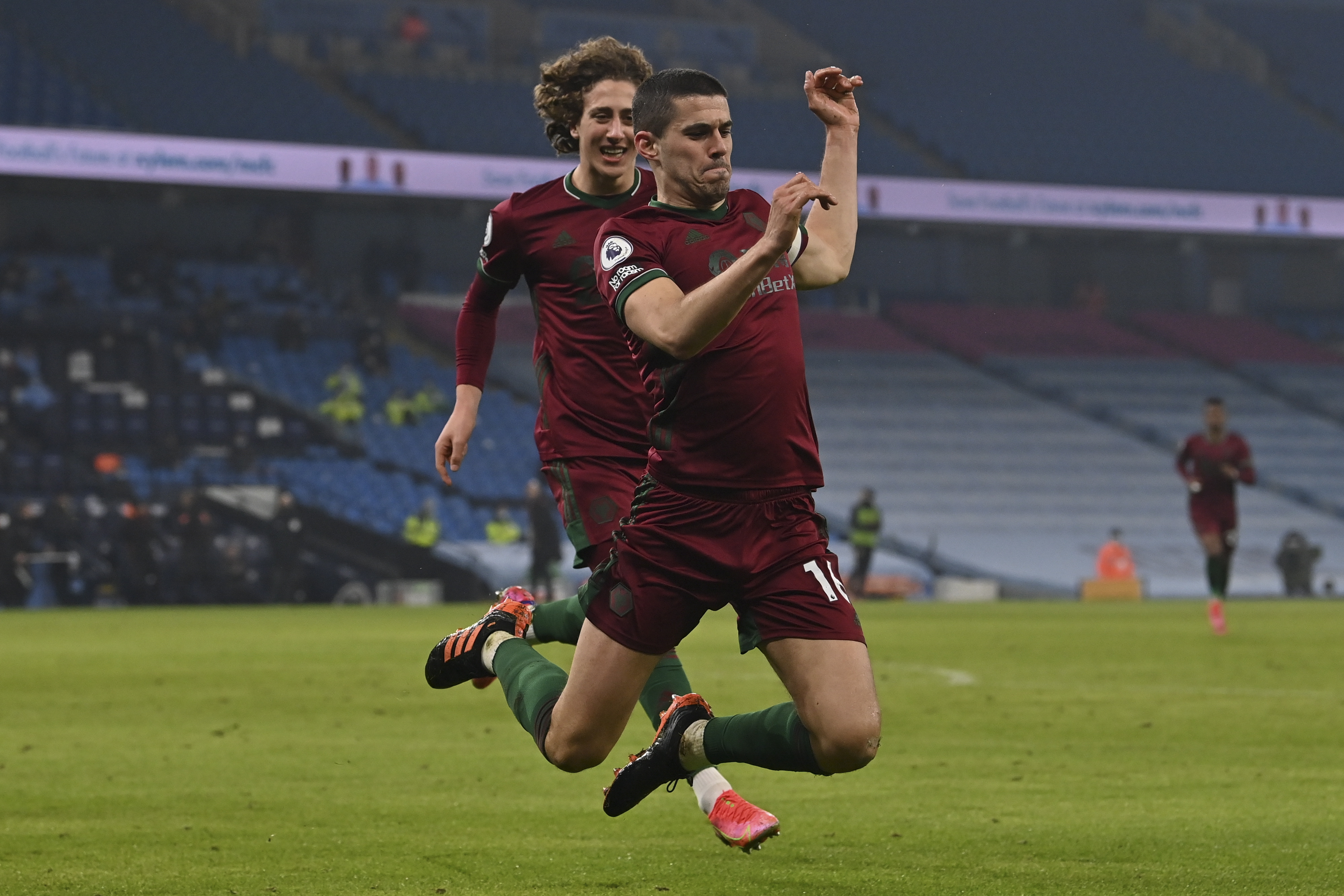 But this looked an extremely tall order against a City team who were full of confidence.

Credit to Wolves for hanging in there but they had a big let off on the stroke of half-time as Mahrez chipped over a cross from the right.

It was flicked on by Bernardo Silva into the path of Aymeric Laporte who tapped home at the back post – only for the linesman’s flag to go up.

A VAR showed he got it right – by the narrowest of margins as he was millimetres ahead of last defender Deondoncker.

Bernardo saw a header smartly kept out by Patricio moments later before he blazed the rebound over the bar.

City had enjoyed more than 80% of the possession in the first half but still had just that solitary goal to show for their superiority.

That could have changed soon after the re-start as Sterling flicked a pass to De Bruyne whose low shot was superbly saved by the visitors keeper. 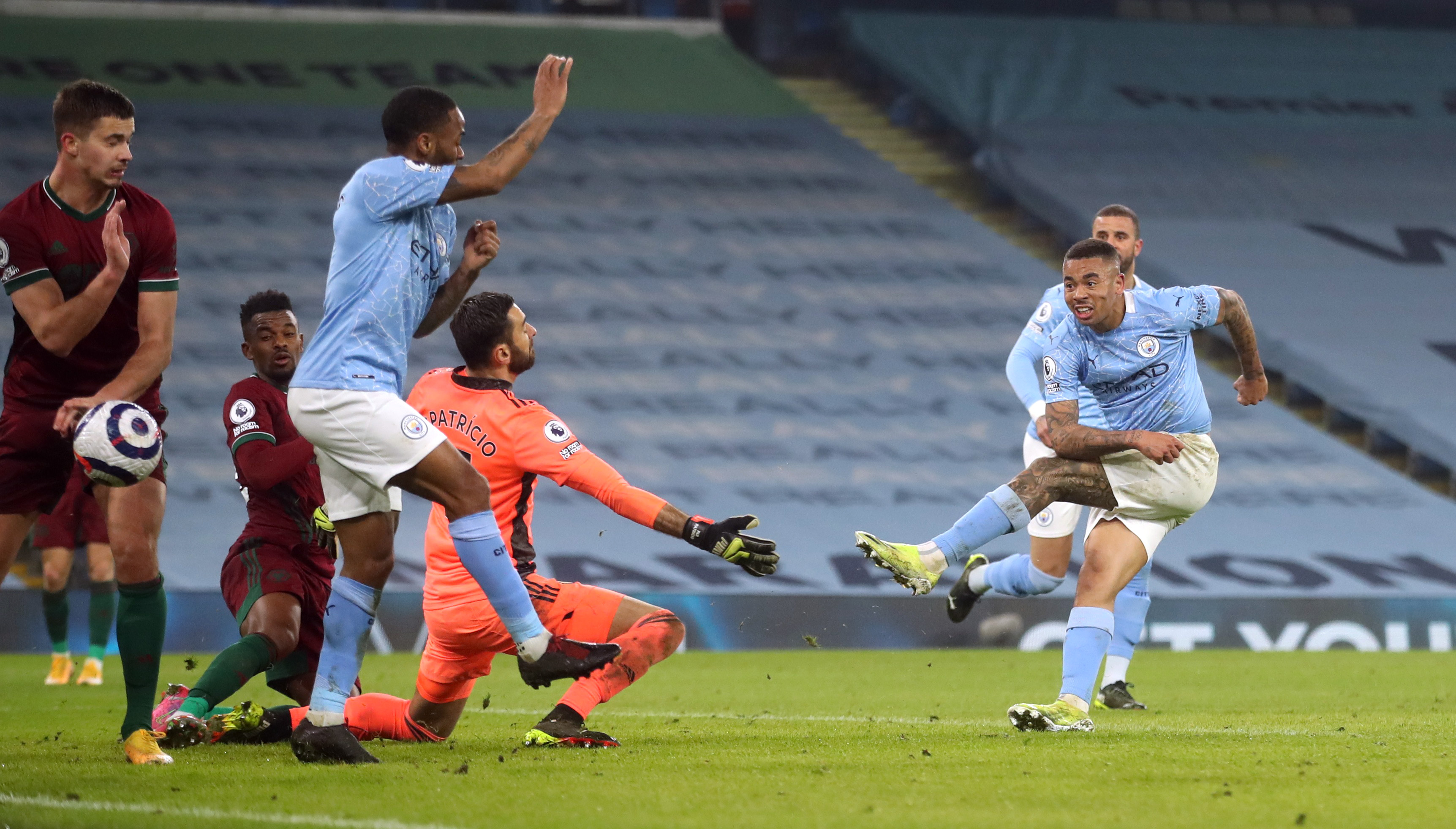 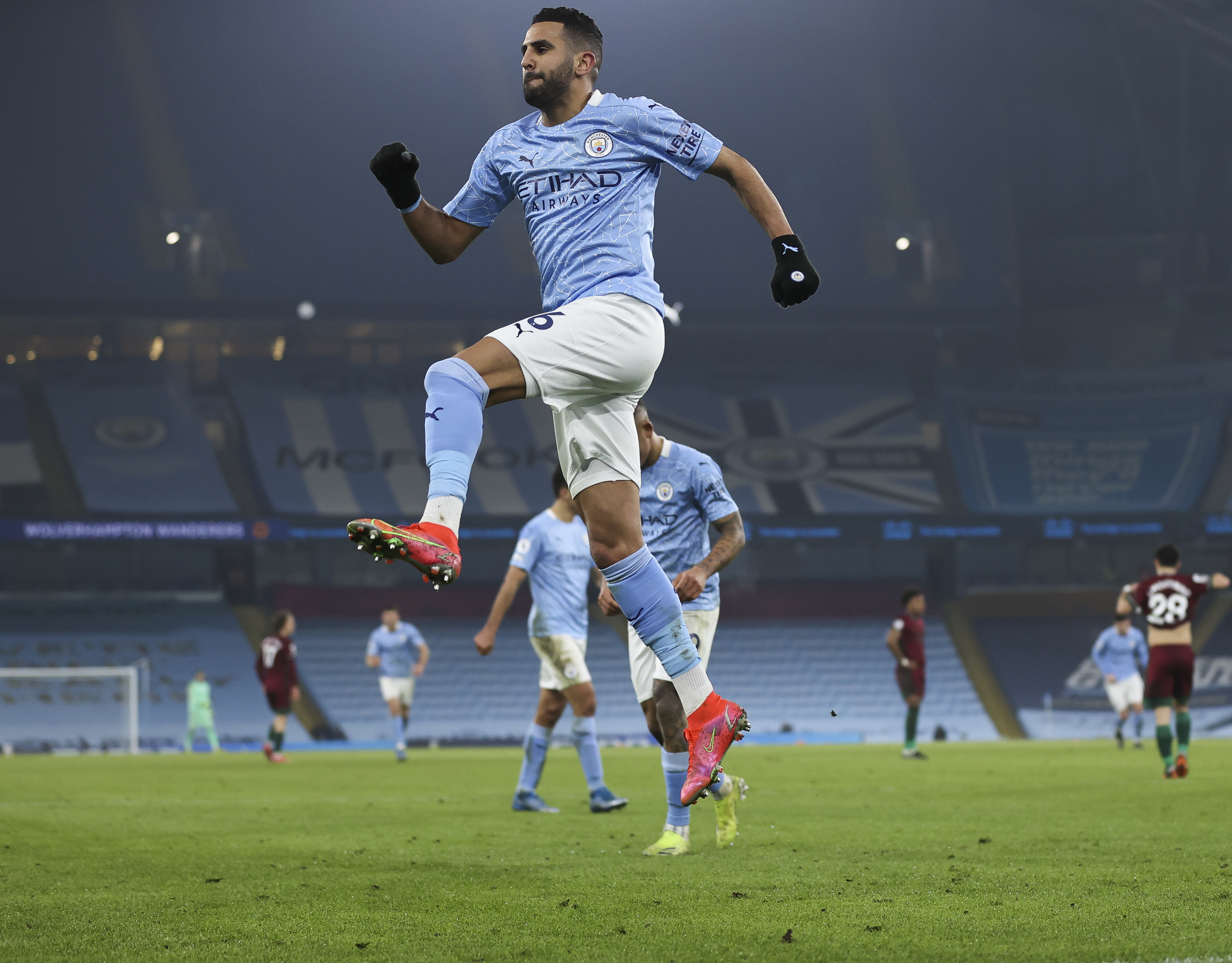 Patricio was there again to keep out a curling effort from Mahrez after some nice build up play by De Bruyne.

The Portuguese international was keeping his team in this and Guardiola was looking frustrated that the game had not been put to bed.

And no wonder. Right on the hour mark Wolves won a free-kick which Joao Moutinho whipped in.

City’s defenders did not pick up Conor Coady and his diving header flew across Ederson and into the bottom corner.

Talk about a sucker punch. The visitors had not touched the ball in City’s penalty box until that moment  – and that was their first effort on target.

City had to regroup and they should have been back in front soon afterwards as Bernardo sent Gabriel Jesus racing clear.

He possibly waited too long and his effort was tipped around the post by Patricio. 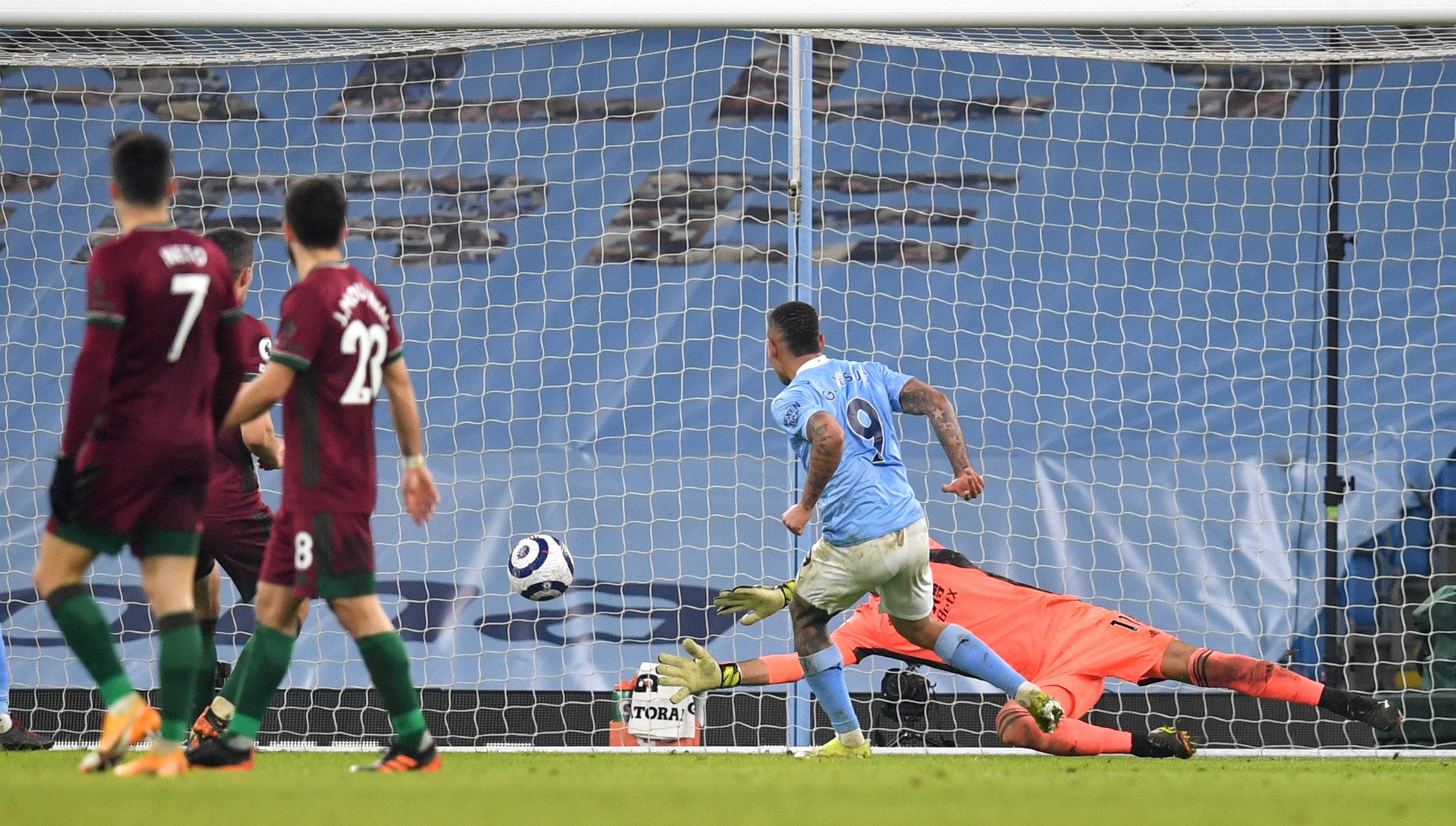 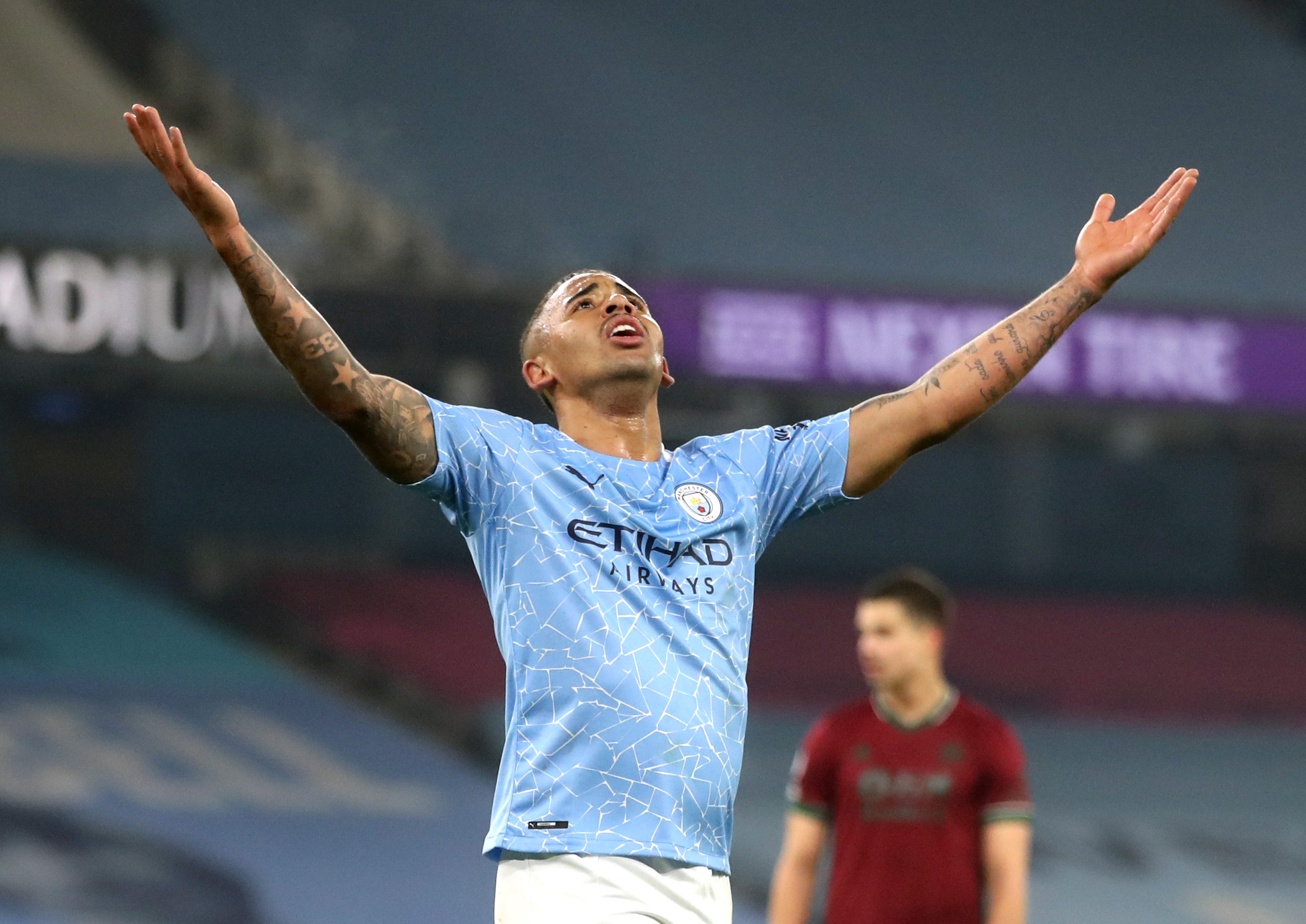 Wolves started to fancy their chances with Traore now causing the home defence some problems – although he blazed an effort over after good work by Pedro Neto.

At the other end another low cross by Mahrez was flicked on by Sterling but it rolled agonisingly wide of the far post.

The same thing happened when the England ace drifted along the edge of the area before curling a shot which clipped the outside of the upright.

Just as it looked like they might run out of luck, Mahrez sent Kyle Walker speeding down the right.

His low cross was not cleared and Jesus turned sharply before rifling home from close range.

Any lingering doubts were eased when Sterling’s run was blocked by Nelson Semedo – but Mahrez swept home the goal his performance deserved.

And there was still time for Jesus to get another as he tapped in the rebound after Ilkay Gundogan’s shot was only parried.

He was given offside but after a VAR check, this time it was given.

On thin ice: How time is running out to save winter sport from melting snow