Sailor Matt Wearn finished a victory lap like no other, sealing Australia’s first sailing gold of the Tokyo regatta and creating history in the country’s most successful day at an Olympic Games.

The 25-year-old from Perth only had to make a reasonable attempt to start and finish the final medal race in the single-handed laser category – and he did just that, finishing the double points race in second at Enoshima Harbour on Sunday.

It’s the first time Australia has ever won four gold medals in one day of Olympics competition.

Wearn embraced his coach Michael Blackburn shortly after crossing the finish line, which delivered Australia its third straight gold medal in the category. Tom Slingsby (London) and Tom Burton (Rio), who Wearn edged for selection as Australia’s representative in Tokyo, had previously won the laser class.

After a slow start to ensure he wasn’t caught up in any trouble in the 10-strong fleet, Wearn edged his way past the other boats to beat all bar France’s Jean Baptiste Bernaz across the line. The margin between Bernaz and Wearn was only two seconds.

Wearn had already celebrated gold when he opened up an unassailable lead after the 10th race on Friday, and completed the formalities to follow two golds in the pool and Logan Martin’s inaugural BMX freestyle win earlier on Sunday. 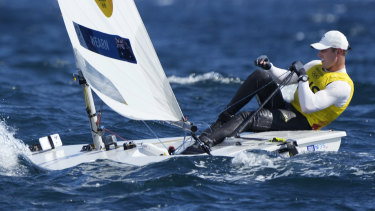 Meanwhile, Australia’s men’s 470 duo of Mathew Belcher and Will Ryan took a giant step towards securing the country’s second gold of the regatta after finishing second and first in their two races on Sunday.

Belcher and Ryan, who won silver in Rio and are embarking on their last Olympics campaign together, hold a commanding 19-point lead from Spain’s Nicolas Rodriguez Garcia-Paz and Jordi Xammar.

They have two more races on Monday and could all but seal the gold, similar to Wearn, if they can pad their margin to 20 points before the double points medal event.