Longtime ESPN Radio host Mike Greenberg is returning to the airwaves as part of a revamped lineup of sports talk programming at the "Worldwide Leader" beginning next month.

Greenberg, who co-hosted ESPN Radio's flagship morning show for 18 years, will have his own show from noon to 2 p.m. ET as part of the new lineup that debuts Aug.17. Greenberg will continue his role on ESPN's mid-morning TV show, "Get Up."

“In radio there is an intimacy in the relationship with the audience that is different from any other medium,” Greenberg said. “I have always enjoyed that and am really looking forward to rediscovering it.” 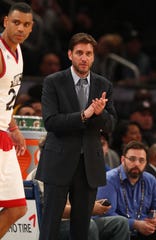 Two-time WNBA All-Star Chiney Ogwumike will be joined by ESPN Radio’s Mike Golic Jr. in the afternoons. Sarah Spain and Jason Fitz return to the air in the evenings and ESPN Radio veteran Freddie Coleman will team with football sideline reporter Ian Fitzsimmons at night.

“Our new lineup will provide sports fans informative and engaging content throughout the week from hosts who all have radio experience,” said ESPN executive vice president Norby Williamson. “They know how to connect with fans and keep them invested in the programming."

Betting offers and sign up bonuses with Paddy Power, Betfair, Ladbrokes, Coral and Betway – The Sun