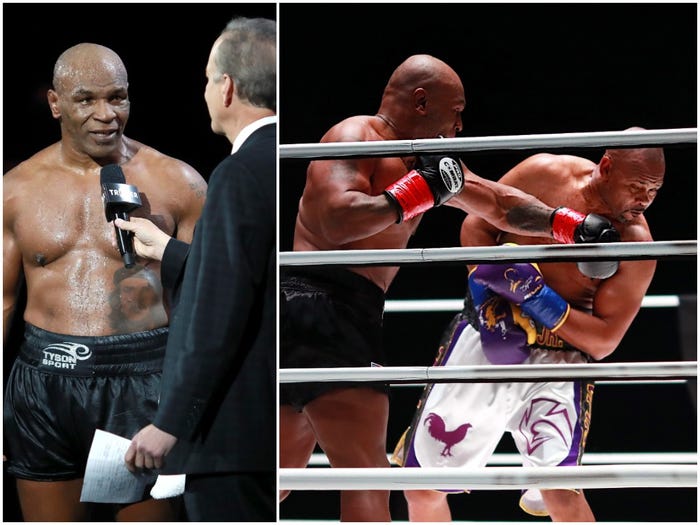 Mike Tyson smoked a joint before his exhibition with Roy Jones Jr, then threw 193 punches in 16 minutes, and said he'd take part in similar events again.

The former heavyweight boxing champion then turned up to the post-fight press conference Insider attended virtually, and vowed to never be "fat, cokehead Mike" again after his eight-round bout.

Though Tyson had said he was planning to "disable" Jones in their match, there was no brutal finish, with the competitors fighting to a draw.

The decision was not a reflection on activity in the ring, as though Jones displayed the signature left hook he was famous for during his 1990s heyday, it was Tyson who appeared to not only land more shots but also the more punishing blows — particularly to the body.

What was perhaps even more remarkable was that Tyson did all that having smoked marijuana beforehand.

A reporter at the media event asked the 54-year-old if he'd already smoked.

"Listen, I can't stop smoking," he said. "I smoke during fights. I have to smoke. Sorry, I'm a smoker. I smoked every day, I never stopped smoking."

On if he smoked literally just before the exhibition, Tyson said: "Absolutely, yeah. It's just who I am."

According to Compubox data sent to Insider, Tyson out-landed Jones in seven of the eight two-minute rounds, and though Jones threw more shots in total, it was Tyson who was more effective.

"It has no effect on me from a negative standpoint," Tyson said. "It's just what I do, who I am, and how I'll die."

He later fielded a question from a different reporter who asked whether it was a good idea for him to be throwing and absorbing punches considering his age, and 14 years away from the ring.

"What happens if I die? No one knows what dying's like. It has to be beautiful. Dying can't be bad because living is great," Tyson said. "Dying has to be something special."

Tyson was full of praise for Jones

"He's very smart so it's quite hard to hit him with a solid punch … he played possum really well, and didn't let me know I hurt him," Tyson said of his exhibition partner for the night.

As to whether he felt aggrieved that the exhibition was scored a draw, rather than a win for him, he said: "I was just happy to be in there with him and go the eight rounds.

"The scorecards didn't mean nothing to me. Everyone knew I could knock people out [but] going the distance is real fighting — that's endurance. You're not going to knock everybody out. I learned that.

"I wanted to go the distance. This is all about going the distance. I was interested in that and I'm training for duration now, rather than the quick kill.

"At 54 I realize I didn't know nothing as a champ — that was just youth. My body feels splendid. I'd like to beat it up some more because it feels great now.

"I always think of myself as a roaring gladiator, like a ruler accomplishing something. Nothing is impossible to somebody who tries, so I never think about failure in that perspective.

"I belong here. This is where I belong. My first day of sparring I got my rib cracked and a guy was just smashing my jaw. I never once said, 'What the hell am I doing here, am I crazy?' I just said, 'Wow I'm in the right place.'"

He then vowed to never become 'fat, cokehead Mike' again

Tyson said he is not aware of how the event performed from a business point-of-view, saying he's only ever been interested in fighting.

However, he added that he'd like to now see the show go on the road by taking exhibitions to "Monaco, the south of France, St. Tropez," to do it alongside a European fighter.

"I just want to continue doing this from a humanitarian perspective," he said.

"Before, it was all about me … a hot chick, a nice car, and the boats and planes, but that doesn't do it for me anymore.

"I went another way. I help somebody else, I guess. I like my pigeons, fancy clothes, but other than that I don't want anything else out of life. But, oh of course my children and my wife! But also my pigeons, clothes, and my joint."

Tyson said the charity component is to help youngsters in local communities. "It's a grassroots charity … a friend of mine involved in stopping crime and helping the youth.

"We don't want to lose the next generation to crime, drugs, the pandemic."

On what he'll do when he wakes up tomorrow, Tyson said: "I'm going to work-out. It's my lifestyle. I'll never be fat, cokehead Mike anymore."

Emma Raducanu DUMPS her coach despite guiding her to US Open and £1.8m win in search of someone with more experience