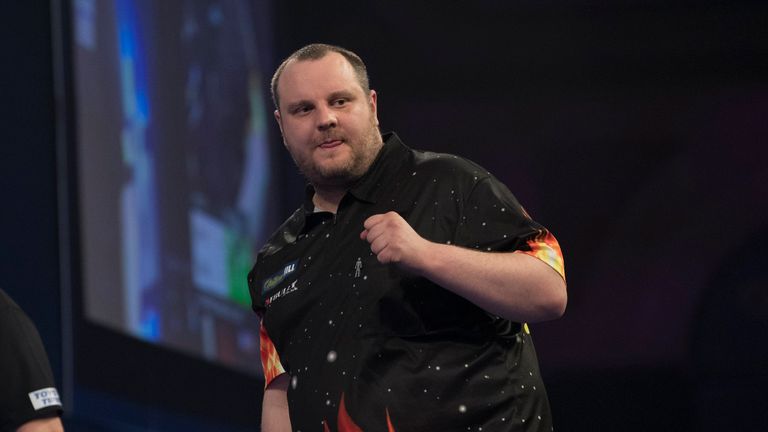 They are three of the more unlikely quarter-finalists but, on Saturday, Nathan Aspinall, Luke Humphries and Ryan Joyce have a chance to keep their fairy-tale weeks progressing at Alexandra Palace.

In a World Championship stacked with shocks, it is perhaps no surprise that three of the giant-killers are still standing when the quarter-finals take place on the final Saturday of the tournament.

The lowest ranked of that trio, Humphries, put the seal on it when he ended the reign of champion Rob Cross on Friday night and it is fitting that Voltage is the man to make way, for it was his remarkable debut triumph that has given the unlikely trio the chance to dream.

“People don’t think I can win this, but I take a lot of inspiration from Rob and I can win this and I want to win this,” ‘Cool Hand’ Humphries told Dave Clark in the Sky Sports studio after his 4-2 victory.

“Rob is an inspiration. People like me, Nathan and Ryan can all believe we can win because we have seen someone do it, we know it’s possible now.

“If you want to be world champion then when you are 2-0 down you don’t give up – it’s all about the fight.” 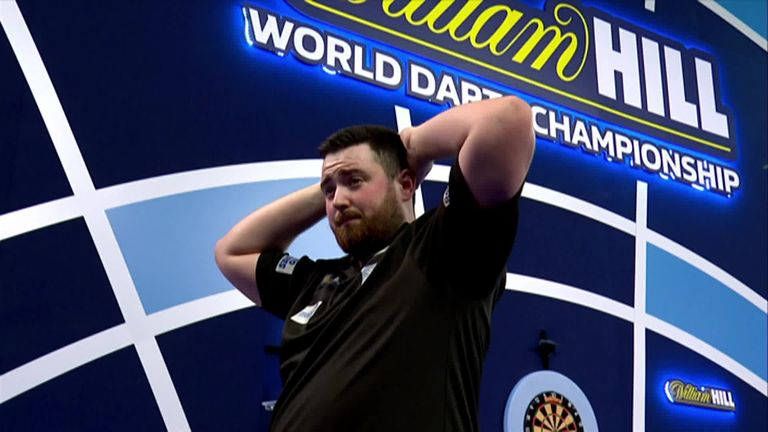 Humphries is perhaps the standard-bearer here. Unknown to the wider audience, the 23-year-old topped the 2018 Development Tour standings for the second year in a row as he continued his education.

An Order of Merit ranking of 90 will rise to at least 55 when the tournament finishes and he is joined by fellow unseeded stars Aspinall and Joyce in the last eight.

Aspinall will take on Brendan Dolan and Joyce faces the ominous task of playing Michael van Gerwen and, like Humphries, it is a time to believe for both men.

“Getting to the quarter-final is a dream come true,” Aspinall told Sky Sports. “There’s plenty more in the tank. I’ve not played my best stuff yet. 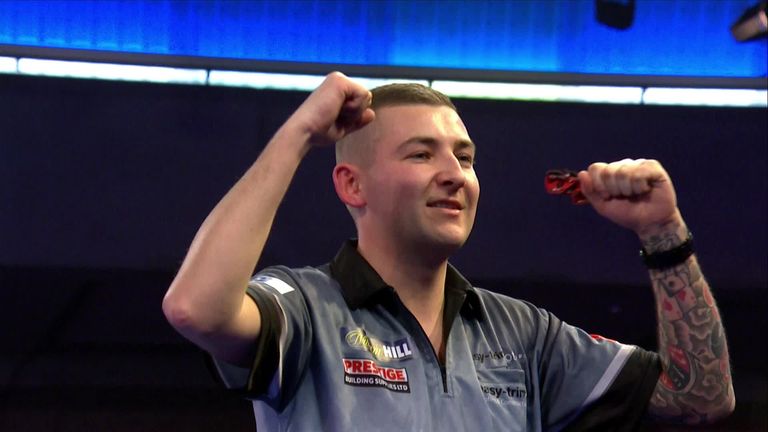 “I’m just trying to enjoy every minute. I’m going up there, trying to have a smile on my face. Yesterday [against Devon Petersen], I wasn’t too happy with how I was playing, but when I started playing well, the smile came back and I’m just enjoying every minute of it.

Aspinall has thrived on the big stage, and feels that the greater depth within the PDC means there are more and more contenders – Cross, Peter Wright, Daryl Gurney, Gerwyn Price, Mensur Suljovic and Raymond van Barneveld have all fallen early this year.

“The depth in the PDC is phenomenal,” he said. “Whether you’re one or 128, we’re all quality players. I’ve put myself into an opportunity where I’ve got a really good chance of moving into the semis.

“There’s no reason why I can’t go on and lift the title. I’ve still got a lot of hard work to do. My performances have got to improve. But I’m still in the tournament. I’ve got as much chance as everyone else who’s still in it. 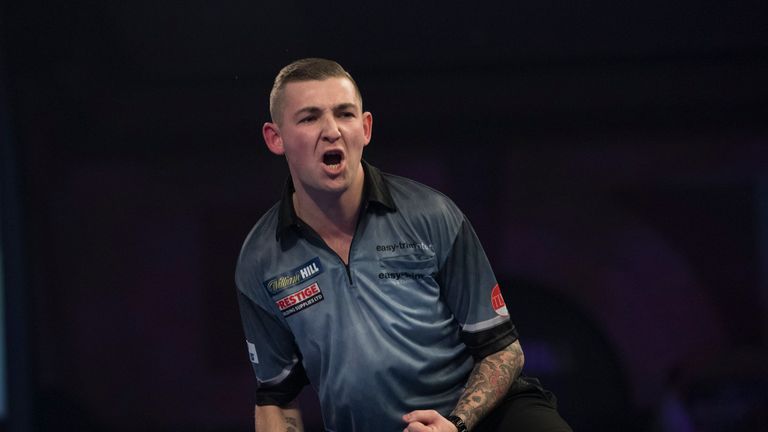 “I’m not a giver-upper, I’m a fighter. Until that final double is hit and I’m out of the tournament, I’m still in it.”

Ranked 73rd and 74th in the Order of Merit coming into the tournament, Aspinall and Joyce have already guaranteed themselves the best payday of their careers (losing quarter-finalists receive £50,000) and Humphries joined the list with his victory over Cross.

For those that sit in the lower reaches of the money lists, the festivities are life-changing and the trio have been remarkable in how they have taken to their time in the spotlight.

Joyce added the scalp of James Wade to that of Simon Whitlock and is in a similar mood to Aspinall.

“It was certainly the best win of my career,” reflected ‘Relentless’. “I love to play well. There’s so many people watching. You get a bit embarrassed when you hit a bad shot. 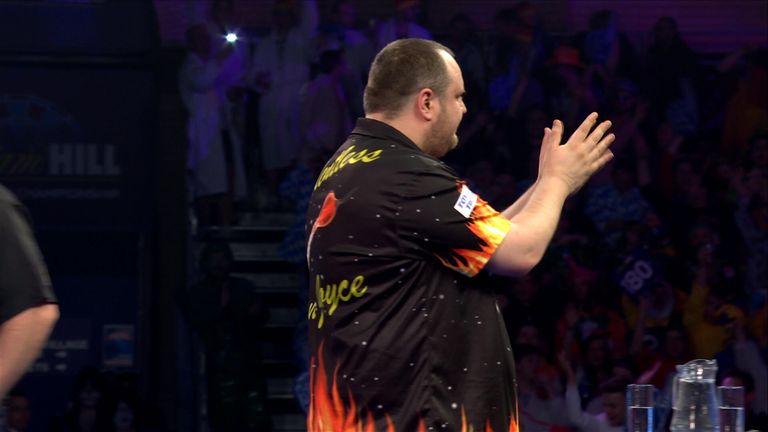 “What an opportunity to play the best player in the world,” he added. “That’ll give me an indication of where my game is at. It’ll be a fabulous experience for me.”

All three men are relishing the opportunity that has come their way and the Ally Pally crowd roar them on with their love of an underdog apparent. It is all a very long way from the sparsely-populated leisure centres of the Pro Tour where both have had their moments.

“It feels like a lot more pressure,” Joyce noted. “I feel a lot more nervous before games on the stage than I do on the floor. My averages are lower. I assume that’s down to pressure. I hope it is! I hope it’s not a problem with my throw.

“When it comes to the key moments, big games, big legs in a big set, something happens that I’m able to switch off and focus. So I think I’m happy in that respect that I can do that.”

??PODCAST LIVE?? @MichaelBridge_ is back and we should have Ryan Joyce with us too….

‘The Asp’ is also loving life at the biggest tournament of the lot. Where other inexperienced stars shrink on the big stage with the eyes of the world tuning in along with 3,500 fans at Ally Pally roaring on, Aspinall is rising to the occasion.

“I believe in my own ability and what I can do,” explained the 27-year-old. “The European Tour events have helped me so much to adapt to the stage game.

“The game against Gerwyn Price was unreal. It wasn’t the best of games, but the way the crowd were [amazing]. I used to go to the Premier League as a fan, and that’s the only way I can describe it. It was so loud. Win or lose that game, I would have loved it, it was brilliant.

“The crowd are brilliant, the atmosphere is just amazing. Anyone, who does any kind of sport, to reach the pinnacle of darts being played on the World Championship stage, that I can achieve that by qualifying, let alone getting to the quarter-final, I’m just loving, keeping going. Every morning I wake up and I know I’m playing, I just can’t wait, I’m so excited.”

All three men will be eager to continue their runs through the tournament and given its unpredictable nature who would rule any of them out.

You can follow every dart from every session of the World Darts Championships on Sky Sports Darts, check out the full schedule here. You can also stay up to date with all the action behind the scenes by following us @SkySportsDarts.

Hannah Green Leads by 3 Strokes at the Women’s P.G.A. Championship

Reports: Drew Brees has torn ligament in thumb, will miss about 6 weeks