GARETH SOUTHGATE needs to get on the phone sharpish if England are to avoid losing Brighton hotshot Tariq Lamptey.

Neal Maupay’s double inside seven minutes and Aaron Connolly’s late strike downed a wretched Newcastle – but it was Lamptey who stole the show. 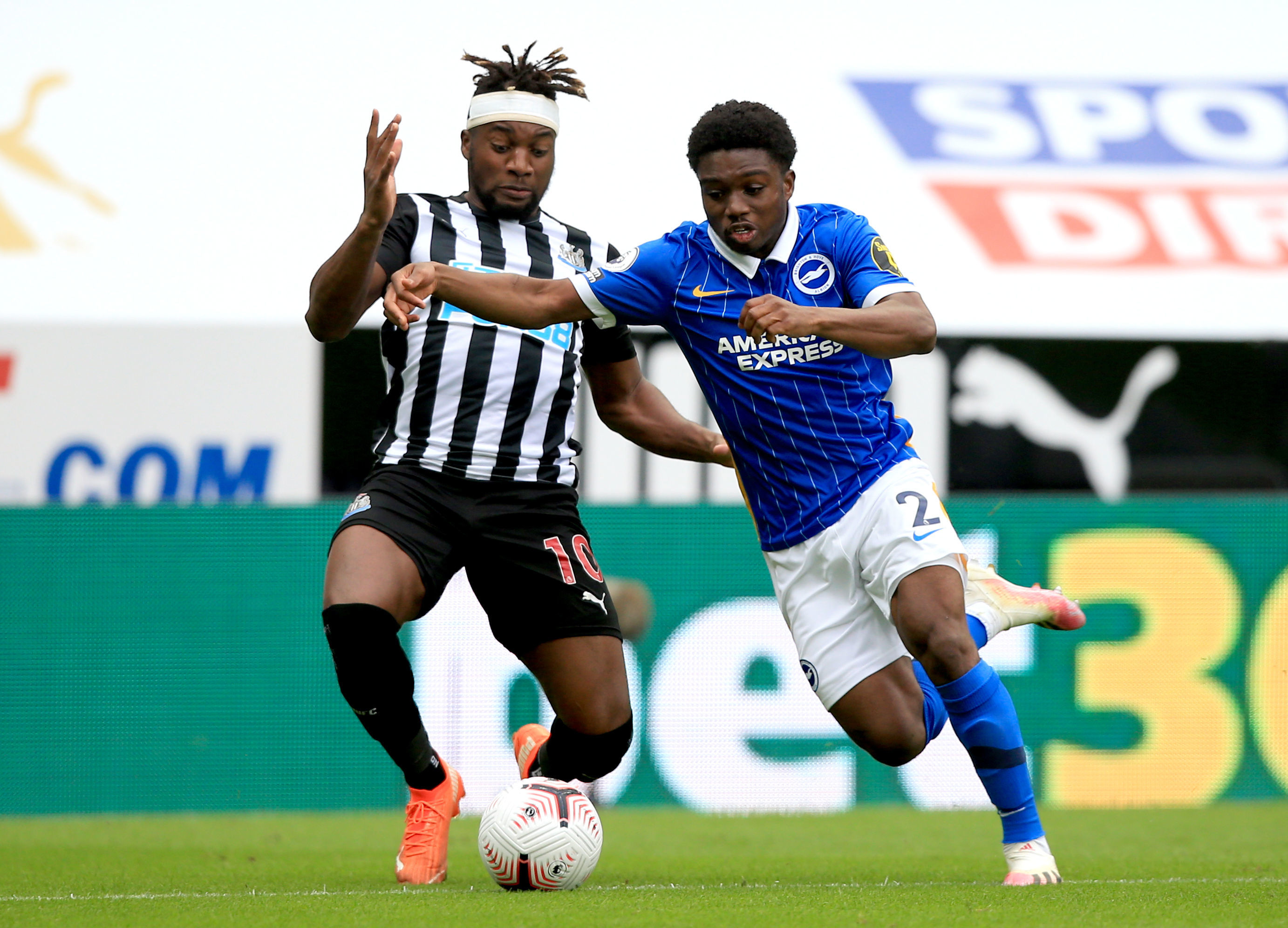 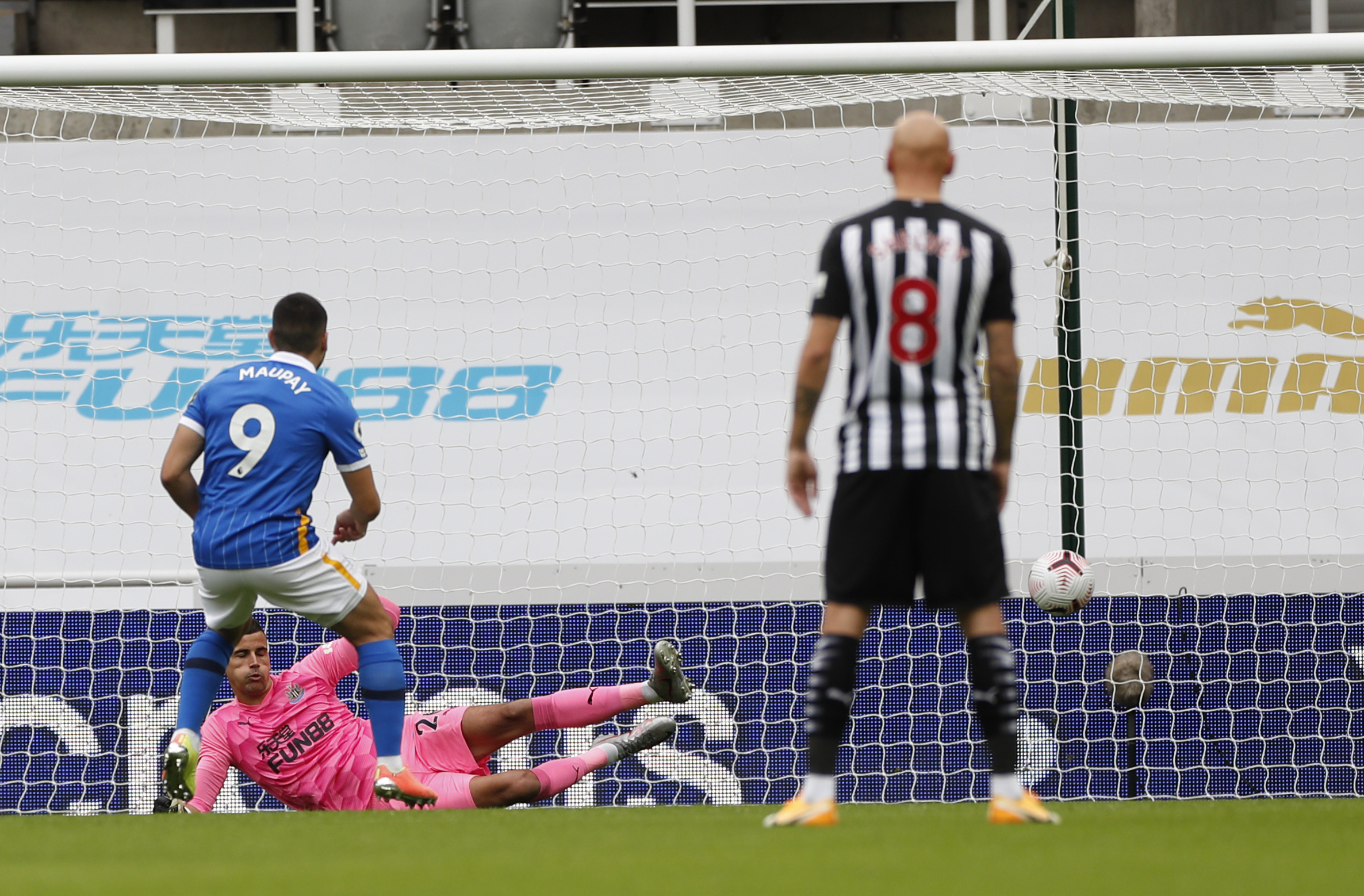 England are spoiled for choice at right-back but, on this showing, he could become the best of the lot.

The Three Lions are in a tug of war with Ghana for his services, and there are fears he could look at his place in the pecking order and go with the country of his parents.

But if the England boss picks on form for next month’s internationals, the England U20 star has to come into consideration.

The Seagulls’ wing-back terrorised the Mags in a first-half that secured the win, with the hosts resorting to kicking lumps out of him.

Lamptey, 19, won a penalty after just three minutes when Allan Saint-Maximin hacked at it him from behind.

Maupay converted and then moments later he played in Leandro Trossard down the right, who squared it for Maupay to finish.

The Londoner looked quicker and sharper than everyone else in everything he did – and to think it was his eleventh Prem outing. 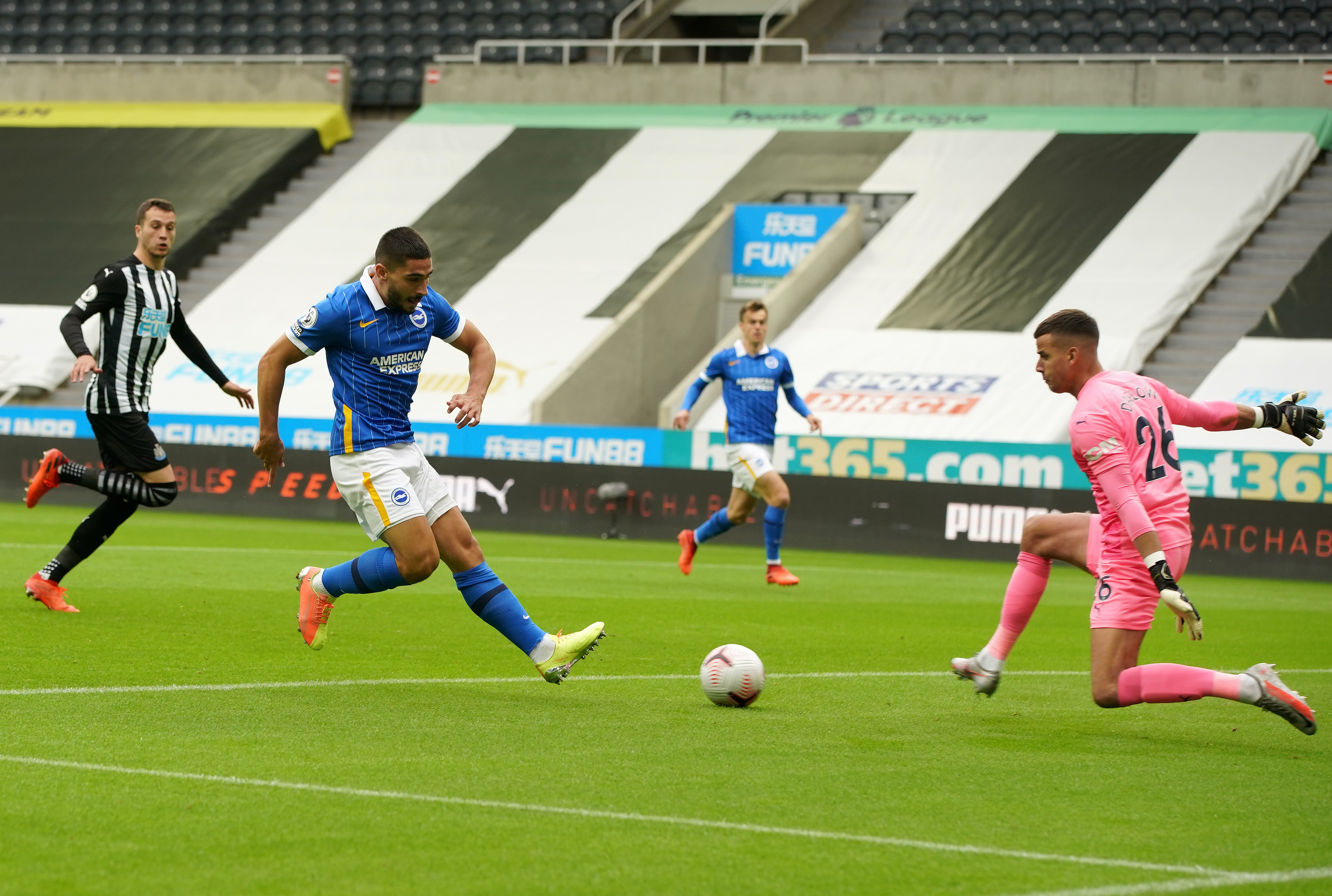 Lamptey moved to the South Coast from Chelsea for £6m last summer.

He started against the Blues in the Prem opener, and while Frank Lampard’s side won 3-1, the youngster put in another standout performance.

Another hot prospect Chelsea lost from under their noses, it’s hard to imagine a single club who would not want him right now.

Steve Bruce’s side did not have a clue how to deal with him, resorting to bully boy tactics in the end.

He may only stand a diminutive 5ft 5in but the pocket is made of steel, shrugging off each challenge before coming back for more.

Brighton boss Potter replaced him after 57 minutes, but by then it was job done – with the only downer a straight red card after a high boot from Yves Bissouma clattered into Jamal Lewis’ face.

Newcastle were shell-shocked after Brighton’s rapid start and never recovered. 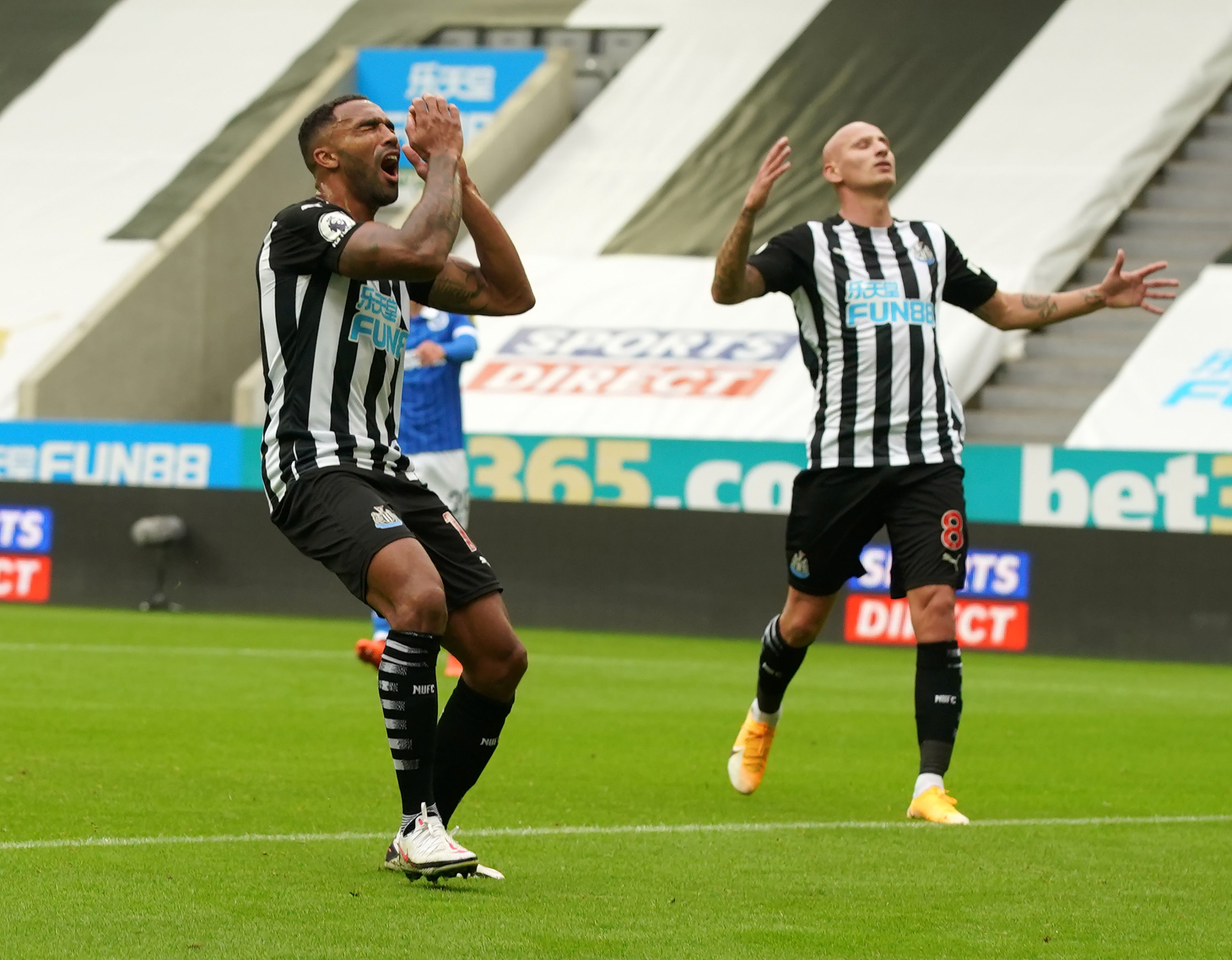 Callum Wilson spooned a guilt-edged header well over, but other than that they were atrocious in every aspect.

Bruce stuck with the same 11 after the opening win at West Ham, leaving Miguel Almiron and Ryan Fraser on the bench after shining midweek in the Carabao Cup.

Owner Mike Ashley took his seat just after kick-off, and before he knew it Newcastle were 2-0 down courtesy of Maupay.

With three minutes gone, Saint-Maximin gave a penalty away after coming through the back of Lamptey.

The French winger got a slight touch on the ball but plenty more of the man and ref Kevin Friend did not hesitate in pointing to the spot.

Maupay stepped up and fired down the middle to make it a dream start – and they doubled their lead three minutes later.

Lamptey was at the heart of it again, playing in Trossard down the right, with the Belgian swinging it in across the floor for Maupay to squeeze beyond Darlow. 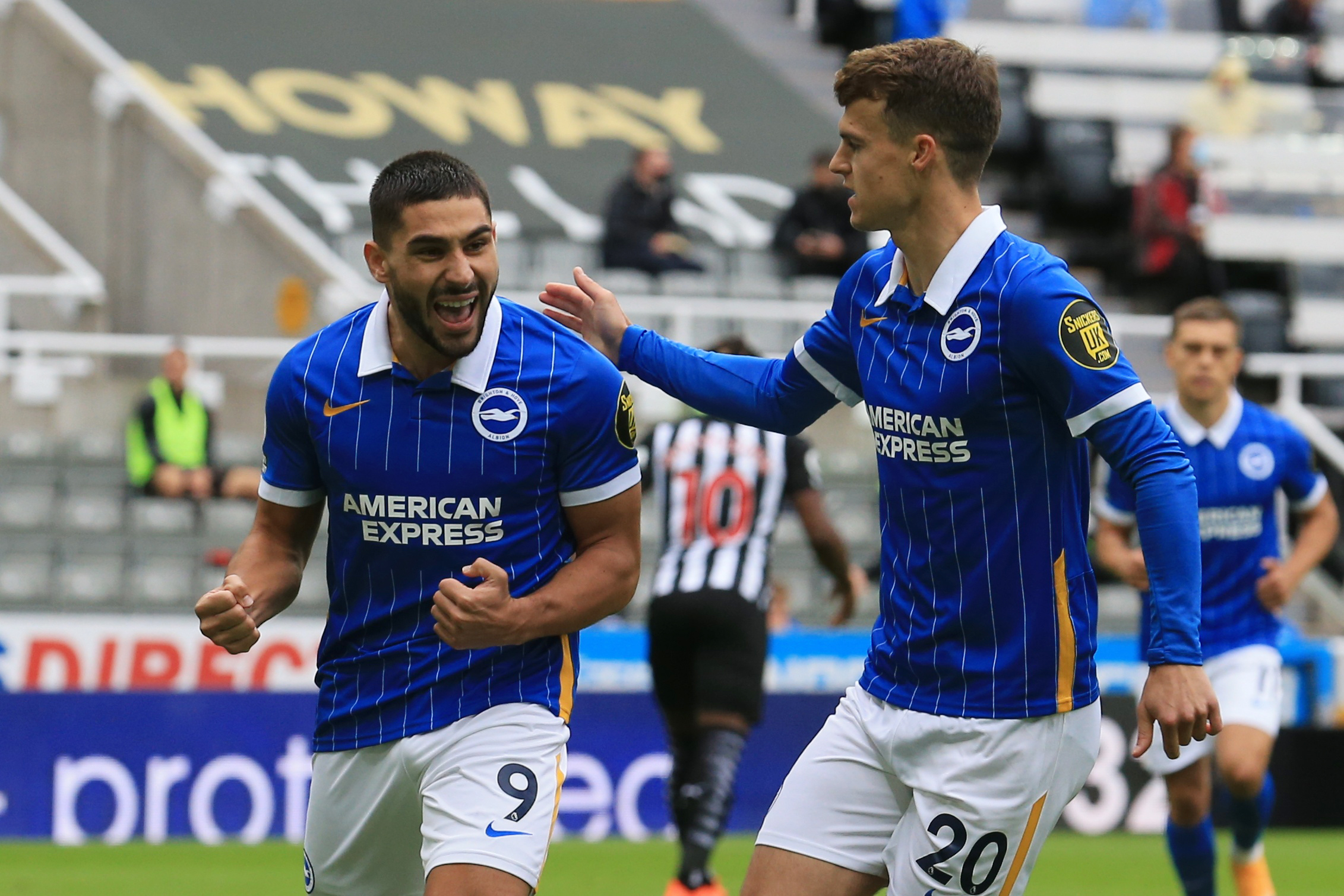 The flag went up immediately, and the hosts thought they were reprieved.

But a VAR check showed that Trossard was inches onside – the goal was awarded, and Newcastle were in free fall.

Lamptey was the tormentor-in-chief  marauding down the right, making it a torrid first Prem outing at St James’ Park for Jamal Lewis.

Newcastle looked scared and had no answer – other than through sheer brutality.

Jonjo Shelvey, Lewis, Wilson and Andy Carroll all clattered into him and, while it looked like he may be forced off, Lamptey dusted himself down each time before going again.

It looked like he may have been forced off on a couple of occasions, but each time he dusted himself down and went again.

And he nearly had his goal just before the break, but Darlow did well to save the low drive with his feet. 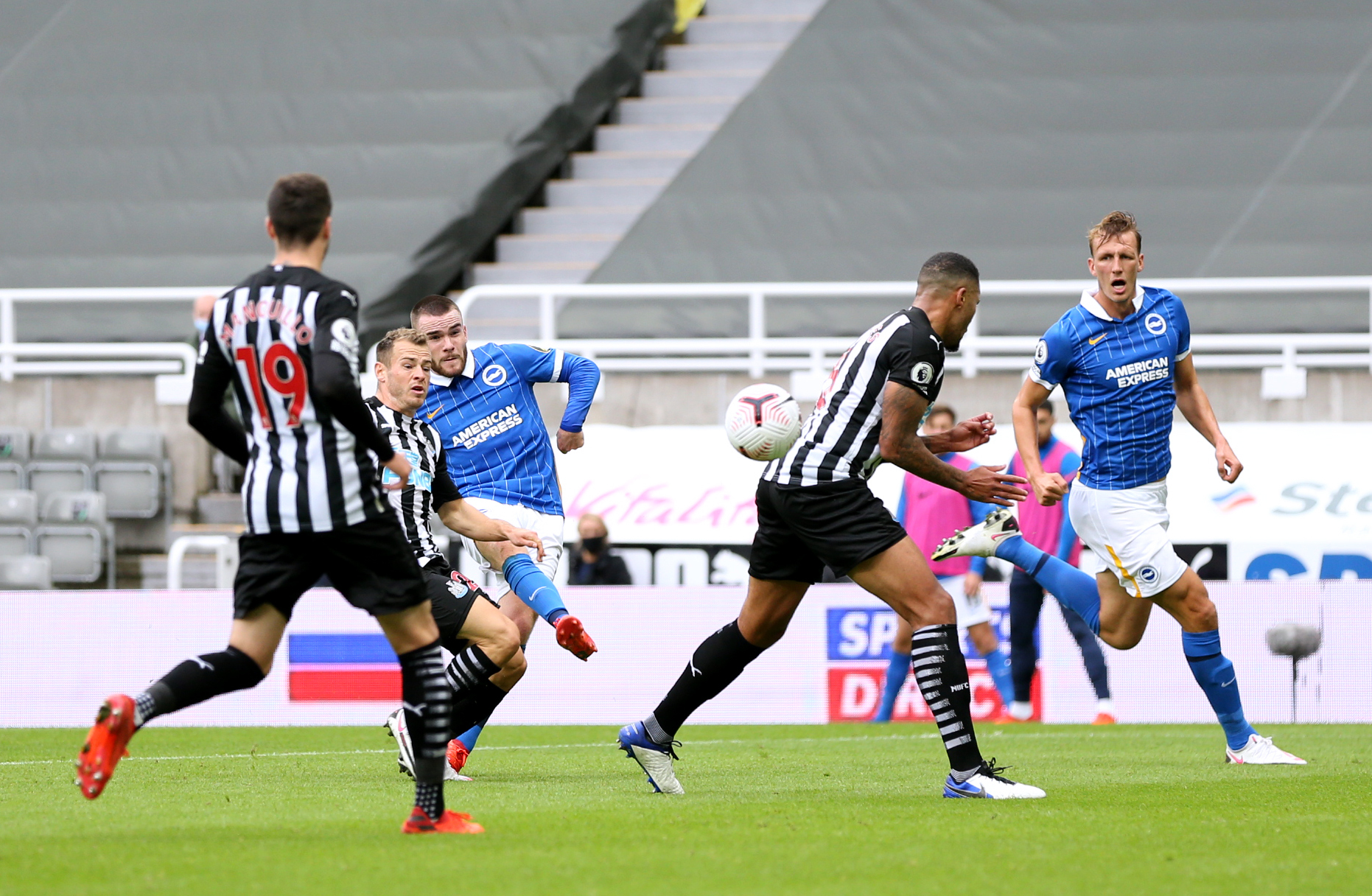 Newcastle were devoid of ideas and inspiration, a rotten first-half in which Bruce must have been thankful St James’ Park was empty.

The team would have deservedly been hammered, and Bruce responded at the break by bringing on Almiron for the ineffective Carroll.

It was a quieter start to the second-half, with Potter taking off Lamptey on 57 minutes having had lumps kicked out of him.

And with Almiron sparking Newcastle into some sort of life, they should have pulled one back just after the hour.

The Paraguayan whipped in an inch-perfect cross from the left to an unmarked Wilson eight yards out, but the Toon’s new striker got it all wrong and nodded well over.

Brighton were hardly clinging on though, with Trossard firing against the post from range before Aaron Connolly blazed over.

But Connolly got his goal with seven minutes to go.

Maupay dribbled at the heart of the hapless Newcastle defence and picked out Connolly to the left, who took one touch before bending into the far corner.

In an otherwise perfect afternoon, Bissouma was given a straight red for clattering into Lewis’ face with a high boot.