The two things we hear most about the Sydney Olympic Games are how great they were and why we couldn’t maintain that magical vibe. After 20 years, we are still in denial about the link between the two.

Although the Games left a tangible legacy in the facilities in Sydney’s west, the ebbing of that intangible mood is widely mourned. Where did the love go? Perhaps it had to be this way: the Games were a one-off event, and once we celebrated our relief at having pulled it off, that exuberance reached its natural endpoint. 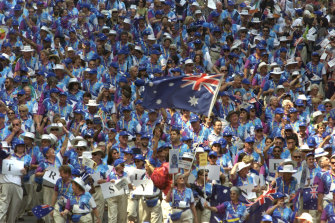 Like millions of other bandwagon-jumpers, I contributed precisely zero to the success of the Games. I’d spent seven years wringing my hands. John Clarke’s The Games was the best expression of my attitude. When the Games arrived, I was, like everyone, an instant convert to goggle-eyed enthusiasm. We never doubted it for a second! It was beautiful, the weather blessed us, and, having been so profoundly wrong in our pessimism, we swung to the other side with a puffed chest for our country and city.

We could pretend to have made sacrifices in cost and convenience, but nobody gives up more, against such long odds of success, than competitors and families and coaches and friends and supporters for sports that only get their big jamboree once every four years. We can revel in the illusion that they are doing it for ‘us’ via our shared national symbols, but who could begrudge them for doing it for themselves and those who shared their sacrifices? For all that Cathy Freeman was carrying on her shoulders, the advice she got from those closest to her, which gave her the freedom to run as she did, was to ‘do it for yourself’. Which she did. She owed us bandwagon-jumpers pretty much what we had given her, 49 seconds of commitment.

(What did I contribute to Cathy Freeman’s victory? I was there in the stadium, empathising with her, feeling what I would feel in her bodysuit, so strongly that I was just about throwing up with nerves, so sick with anxiety during the race that even now I suffer a nauseated reaction watching it. In other words, contributing precisely nothing.)

There are always complex questions arising from the connection, or disconnection, between performer and audience in sport, particularly when nationalism is an ingredient. When Adam Scott hollered ‘Come on Aussie!’ when he sank that putt to win the 2013 Masters, was he saying that for me, wetting my pants on my couch in Sydney? For himself, super-identified with nation? For Greg Norman? When you see the national pride on display in an Olympic Games, are the colours simply a source of fuel for the athletes, and if more than that, what is the ongoing nature of that relationship between them and us? 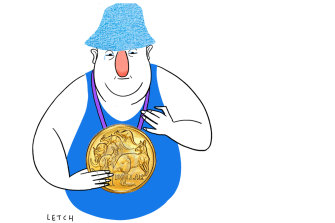 The complexity is highlighted graphically in this pandemic year of minimal crowds. Watching Naomi Osaka and Dominic Thiem win US Opens last week in the echo chamber of Flushing Meadows was to bear remote witness to a brute reality: they were doing it, literally, for themselves. This week, at a sparse Winged Foot, the world’s best golfers might believe their achievements are national and collective, but it’s a hard illusion to sustain when nobody is there cheering.

What the emptiness of arenas can highlight is that when we claim a share in what others achieve, we are only playing our part in a kind of pantomime act of national unity, which we can fully enjoy during the sporting spectacle but then immediately drop in the rest of our lives, as the pandemic has also dramatically shown. Perhaps our connection is not so much a deep sense of belonging as a consumer’s transaction, which is why it fades so fast.

Economic orthodoxies convince us that by being consumers, we are contributors to the public good. Most of us ‘consumed’ the Sydney Olympic Games: bought tickets, rode the trains, hosted visitors, ate burgers, imbibed the spirit and had a fine old time. We got drunk on our economic activity and patted ourselves on the back for not stuffing everything up.

It was fantastic and glorious and enchanted, one of the best fortnights of our lives, but it shouldn’t be any great mystery why ‘we’ couldn’t keep that ball rolling, as ‘we’ did very little to get it going in the first place. And over the next 20 years, the workers kept doing the work and the consumers’ appetites shifted to something new.

The best way of marking the 20-year anniversary would be to assert the narrative of gratitude over the narrative of pride. We consumers ought to be thankful to those people who made the Games what they were. This was only momentarily ‘our’ triumph. The permanent achievement, dear volunteers/workers/public servants/athletes/Olympic family, was all yours.

Premier League LIVE UPDATES: Latest from Bournemouth vs Newcastle and Everton vs Leicester

Coronavirus and Premier League: Key questions about what lies ahead