Our quick guide to how skateboarding works in the Olympics – and who to watch out for.

Skateboarding started in the 1950s as an outlet for frustrated Californian surfers. When the surf was flat, they put wheels on boards and surfed on the streets instead. Now a global phenomenon, skateboarding is practised on streets and in parks worldwide, and in “street” and “park” events at the Tokyo Olympics, where a 13-year-old will be one of the big medal hopefuls. 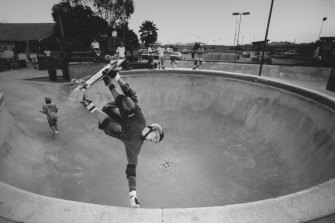 How did skateboarding get so big?

Skateboarding made the leap from suburban social activity to corporatised world concern in the ’90s. It had an international tour, endorsements, broadcast deals and fame for the biggest names in the sport. One legend was the Californian Tony Hawk, an exemplar of “vert” (vertical) skateboarding, which evolved out of “pool riding” (skating in empty swimming pools that had curved bottoms) in the ’70s. Tony Hawk’s Pro-Skater video game series has sold 1.4 billion copies since it started in 1999.

Skateboarders have been among the best marketers in sport, using video and social media posts of their tricks and their products to win eyeballs and sales. That’s at least part of the reason why in skateboarding competitions you’ll see kids as young as nine or 10 alongside veterans (that is, people aged 50 or older). Sure, injuries and falls come with the territory but then again, you’re pushing boundaries with your airtime tricks and other gravity-defying manoeuvres.

What’s it doing in the Olympics?

Sky Brown, the world’s No. 3, below, is the youngest British Olympian ever at age 13 (she was, incidentally, born in Japan, where her mum is from). Teenage teammate Bombette Martin started skating in Manhattan before her family moved to Birmingham.

Sky Brown is the world’s number three and youngest skater at Tokyo.Credit:Sky & Cloud

The pair exemplify why skateboarding is in the Olympics. A few years ago, in a bid to appeal to younger people, the International Olympics Committee invited submissions from fresh, popular sports for inclusion in the Games. Skateboarding’s international body, World Skate, threw its hat into the ring and in 2016, the sport was given a place at Tokyo. It also has provisional approval for Paris 2024, where breakdancing will debut as Paris’s hometown pick.

Surfing, rock climbing and three-on-three basketball are also new Olympic items on the menu, as well as karate, which is Japan’s pick for a one-off event.

For both Olympics organisers and skateboarding as a sport, it’s a win-win: skateboarding has an established world tour, rankings and competition formats; skating can be hosted in all kinds of indoor or outdoor venues; it’s big in many countries; and it has a good balance of male and female competitors of all ages, from Brown to Denmark’s Rune Glifberg, who is 46.

Above: US skater Nyjah Huston, the world No.1.

How do you win a medal?

Medals are up for grabs in “street” and “park” events. As the name suggests, “street” emulates the conditions of an urban road with kerbs, rails, stairs and slopes that allow the most agile skaters to show off their board flip tricks, ollies (a jump that looks like the board is stuck to a skater’s feet) and grinds (where the board slides, rather than rolls, along a surface).

The “park” event has been shaped by, well, the shape of the skate ramps and bowls you see in parks all over the world, which allow skaters to perform all sorts of ingenious tricks while airborne. Below is some World Skate footage of Australia’s Poppy Starr Olsen winning bronze at the 2018 world championships in China. In a nutshell, skaters in four groups of five complete three 45-second park runs or two 45-second street runs, judged on speed, difficulty, originality, timing, stability and overall flow. Park uses a zero to 100.00 score and Street a zero to 10.0 format. The top eight skaters go to the final.

Above: Australia’s Poppy Starr Olsen, ranked fourth in the world in park events.

Are we any good at it?

Australians have regularly featured at the top of the world rankings but, as with any sport with judging and a big field, it all comes down to how well someone skates on the day.

In the park events, Australia has Olsen (the subject of a new documentary), who finished Olympic qualifying ranked fourth in the world, Keegan Palmer (seventh in the world) and Kieran Woolley.

In street, we have Hayley Wilson (who is in the world’s top 10) and Shane O’Neill who has won gold and silver at world championships. In early July, he had just returned to competition after breaking a “couple of ribs” but expected to be right for Tokyo.

The United States still produces the most pro skaters and in both men’s competitions they’ll be hard to beat. US skater Nyjah Huston is the world’s overall No.1 and reportedly has won more prizemoney than any skater in history (see a clip of his fancy boardwork above). In women’s, Japan (see Aori Nishimura, above) and Brazil have a big slice of the world ranking, although nations such as Australia (above) and the Netherlands have high-ranked talent too.

Mostly, though, there is little between those in the top 20 in any of the competitions so falls and missed tricks can cost someone dearly. Pulling off a new trick or finishing a perfect run could, on the other hand, mean someone walks away with a flash of bronze, silver or gold.

More quick guides to the other new Olympic sports …