The Australians’ path to an Olympic medal will need to be through the No.1 seeds, Sarah Pavan and Melissa Humana-Paredes, after they eased into the quarter-finals with a round of 16 win on Monday.

It will reignite a rivalry between the teams, which climaxed when Pavan and Humana-Paredes won two tight sets at Coolangatta in 2018.

But Pavan and Humana-Paredes know what type of challenge awaits this time when they take on the Australians at Shiokaze Park on Tuesday night (11pm AEST).

“Australia is a really good team,” Pavan said after toppling Spain’s Liliana Fernandez Steiner and Elsa Baquerizo McMillan 21-13 21-13 in their round of 16 clash.

“They are excellent from the service line so we’re gonna have to be very mobile and really communicative on our services. They also run a really varied offence. They’re not traditional, they’re running plays all over the place so we’re going to have to be really steady and stay balanced with our block defence to try to make some solid plays. 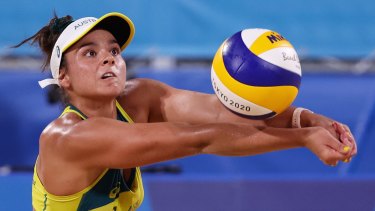 “It’s going to be a back-and-forth game, we know that, and like today we just have to take advantage of the opportunities when we have them.”

Artacho del Solar and Clancy will take a huge step towards securing Australia’s first gold medal in women’s beach volleyball since Sydney 2000 if they can upset the Canadians, trying to become the first team from their country to win a medal in this event.

The winner will take on either the second Canadian entry, 10th seeds Heather Bansley and Brandie Wilkerson, or Latvia’s Tina Graudina and Anastasija Kravcenoka (15th seed).

Artacho del Solar and Clancy eased into the quarter-finals with a 22-20, 21-13 win over lower-ranked Chinese rivals in the round of 16, prompting Clancy to claim “this is where the tournament starts”.

“They are excellent from the service line so we’re gonna have to be very mobile and really communicative on our services.”

Artacho del Solar and Clancy have only lost one match so far in the tournament, a preliminary against the Russian Olympic Committee’s Nadezda Makroguzova and Svetlana Kholomina.

And they will have no greater obstacle in trying to reach the medal matches than the world champions, with American aces April Ross and Alix Klineman as well as Brazilians Ana Patricia Silva Ramos and Rebecca Silva on the other side of the draw.

Ross and Klineman are gunning for the United States to win a fourth straight gold medal in beach volleyball.

“Canada is the only nation left with two teams still in the quarter-finals,” Humana-Peredes said. “Normally at this stage you see two Americans, two Brazilians.

“Here you’re seeing two Canadians now and I think that says a lot about our program and our federation, and as a country we should be really proud of where we are in beach volleyball.”

How long was Tom Brady at Patriots, how many Super Bowl rings did he win and what is his net worth? – The Sun