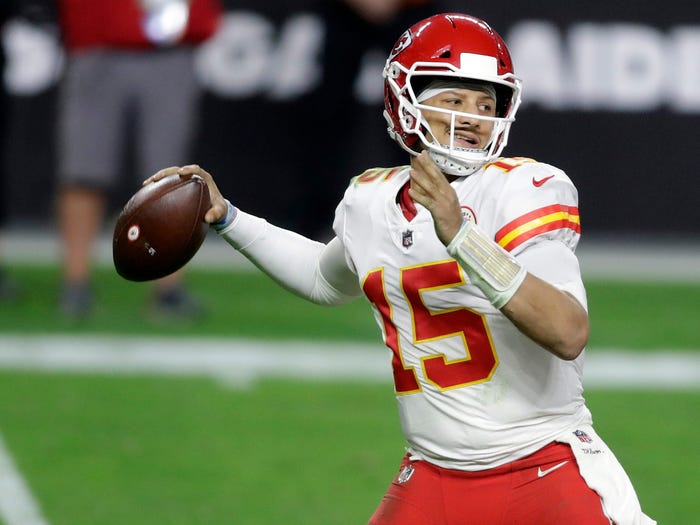 After 11 weeks of the NFL season, the contenders and pretenders have started to make themselves clear.

The Chiefs are still the team to beat, but they are beatable, as the Raiders have shown twice this season. The NFC is wide open, with the Saints, Seahawks, and Packers having a case to be considered the favorites to come out of the conference.

While 14 teams will make the playoffs this winter and fight for the right to lift the Lombardi trophy, according to the number-crunchers at FiveThirtyEight, only 13 teams in the NFL still have a realistic (at least 1%) chance of winning Super Bowl LV.

Take a look below to see which teams are set to make a run at a title.

One thing to know: The Raiders played the Chiefs close for a second time this season but left Patrick Mahomes a bit too much time for his final game-winning drive on Sunday night. Still, Las Vegas remains the only team to have beaten the Chiefs in the past calendar year and will be a tough out if they can make the playoffs in a crowded AFC.

One thing to know: Through 10 games, Kyler Murray has the fourth-best odds to win NFL MVP, according to the bookmakers in Las Vegas. He'll have to keep his impressive play up through the final stretch of the season if he's to guide his team to the postseason. Despite the Cardinals' solid 6-4 record, they're still third in the NFC West as the current standings hold.

One thing to know: The Titans erased a 21-10 third-quarter deficit to comeback and beat the Ravens in overtime on Sunday. Tennessee may be the toughest team in football with a solid defense and giants like Derrick Henry and A.J. Brown carrying the offense.

One thing to know: The Ravens have now lost three of their past four games and still have tough games against the Steelers and Browns coming up on the schedule. On Thanksgiving, they'll be without their top two running backs — J.K. Dobbins and Mark Ingram — due to COVID-19. John Harbaugh will have to figure out a way to turn things around fast.

One thing to know: The Bills didn't play last weekend, but they still made gains on their lead in the AFC East thanks to the Miami Dolphins' loss to the Denver Broncos. If they can hold on for six more weeks, they'll have their first division title since 1995.

One thing to know: The acquisition of quarterback Philip Rivers was the biggest move the Colts made in the offseason, but it's been the team's defense that has truly helped them ascend to the level of a contender. Through 10 games, the Colts are one of just two teams in the NFL holding opponents to under 300 yards of offense per game.

One thing to know: Tom Brady has looked lost against good competition this year, with specific concerns about his downfield passing. With a quarterback struggling with his accuracy on deep throws, it's tough to get the best value out of stud wide receivers Mike Evans and Chris Godwin. Something in the Buccaneers offense has got to change, and fast.

One thing to know: Wide receiver DK Metcalf has nine touchdowns through 10 games and is averaging 86.2 yards per outing for the Seahawks. Between him, Tyler Lockett, and superstar quarterback Russell Wilson, the Seahawks' offense is one to be feared.

One thing to know: The Los Angeles Rams are starting to look like the team that cruised to a Super Bowl appearance in 2018, with a rock-solid defense and an offense with too many weapons to cover on any given play. In the past two weeks alone, they've beaten likely NFC contenders in the Seahawks and Buccaneers.

One thing to know: Wide receiver Marquez Valdes-Scantling had a brutal fumble in overtime that wound up costing the Packers a win last weekend. Still, Green Bay has one of the scariest offenses in all of football and will be a difficult out in the playoffs. Better to get the fumbles out of the way now than have them happen in the postseason.

One thing to know: Mike Tomlin and the Pittsburgh Steelers are undefeated but have games against the Ravens, Bills, and Colts left on the schedule. Going 16-0 isn't impossible, but it's going to be a tough road to get there.

One thing to know: Despite being without starting quarterback Drew Brees on Sunday, the Saints rallied past the Atlanta Falcons to a comfortable victory, leaving head coach Sean Payton to take a victory lap of sorts on social media for his faith in gadget-turned-backup quarterback Taysom Hill.

One thing to know: Patrick Mahomes orchestrated a masterful touchdown drive in the final seconds of regulation on Sunday night against the Raiders to snatch victory from the jaws of defeat. Such comebacks have been made to feel commonplace by Mahomes and company, but they are still, in fact astounding, and should be appreciated as such. There's a reason the Chiefs are the favorites to retain the Lombardi Trophy this year — no lead is safe against them.

Remember this story if you call NFL players greedy