Patrick Mahomes was helped off the field toward the end of the Kansas City Chiefs’ 27-3 blowout loss to the Tennessee Titans after taking a knee to the helmet in the fourth quarter.

Mahomes was trying to make something happen down 24 points in the final period. The pocket quickly collapsed on him, and he was wrapped up around the legs by Titans defensive end Denico Autry. As Mahomes started to fall, he was hit in the head by Jeffery Simmons’ knee. 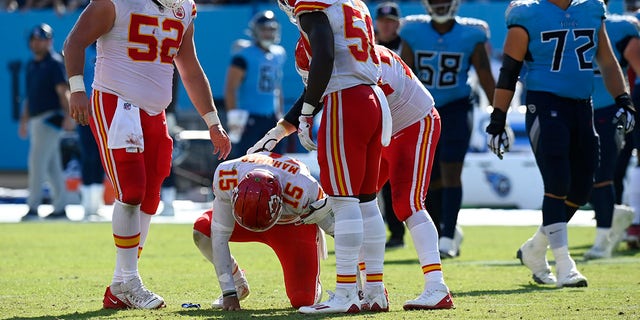 Kansas City Chiefs quarterback Patrick Mahomes (15) slowly gets up after being hit in the second half of a game against the Tennessee Titans Sunday, Oct. 24, 2021, in Nashville, Tenn.
(AP Photo/Mark Zaleski)

It was a rough day for the Chiefs overall. 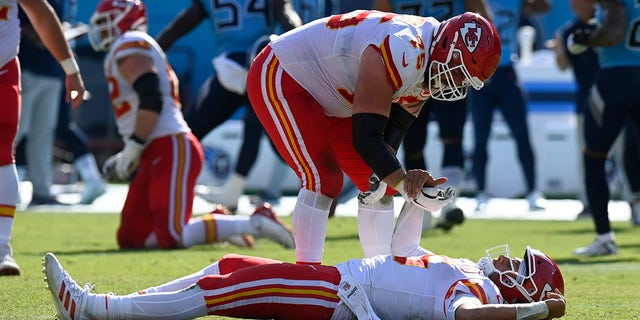 Kansas City Chiefs quarterback Patrick Mahomes is helped up by Mike Remmers (75) after Mahomes was hit in the second half of a game against the Tennessee Titans Sunday, Oct. 24, 2021, in Nashville, Tenn.
(AP Photo/Mark Zaleski)

The Titans dominated Kansas City from start to finish, scoring all 27 of their points in the first half.

Derrick Henry started the scoring with a 5-yard passing touchdown to MyCole Pruitt. 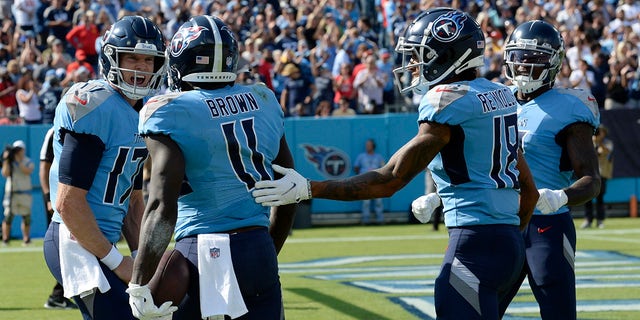 Tennessee Titans quarterback Ryan Tannehill (17) celebrates with wide receiver A.J. Brown (11) after they combined for a 24-yard touchdown pass against the Kansas City Chiefs in the first half Sunday, Oct. 24, 2021, in Nashville, Tenn.
(AP Photo/Mark Zaleski)

The Chiefs didn’t score until 11:04 remained in the third. It was a Harrison Butker field goal.

Tannehill finished 21-for-27 for 270 passing yards with the touchdowns and an interception. Henry finished with 86 rushing yards. Brown led the way with eight catches for 133 yards and a score.

Mahomes has thrown nine interceptions through the first seven games of the season. He had 11 in 2019 and 2020 combined, but it appears the 2021 iteration of the Chiefs is much different than what fans are accustomed to. 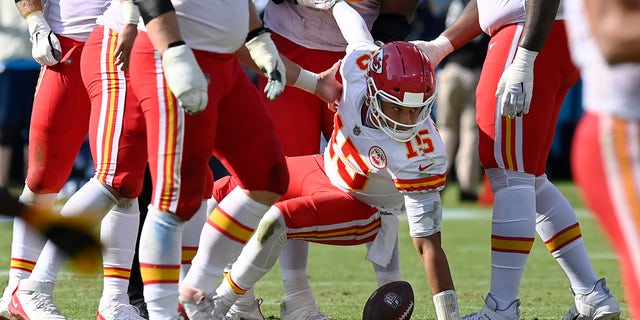 Kansas City Chiefs quarterback Patrick Mahomes (15) is helped up after being sacked by the Tennessee Titans in the second half Oct. 24, 2021 in Nashville, Tenn.
(AP Photo/Mark Zaleski)

Tennessee improved to 5-2 on the season, and Kansas City fell to 3-4.