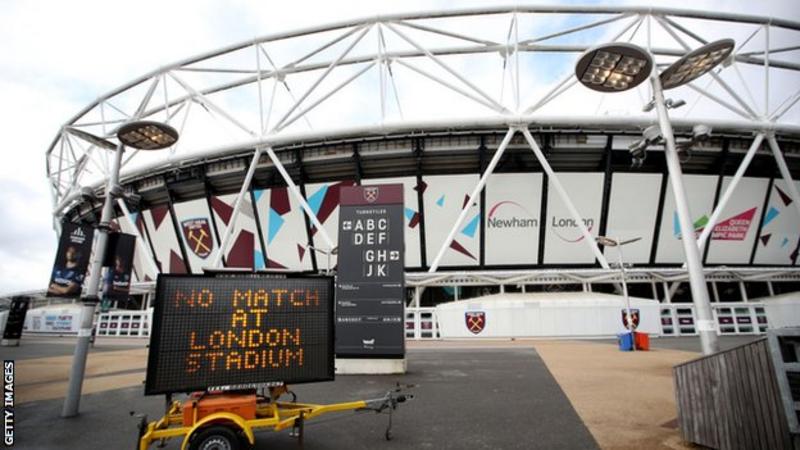 Premier League and English Football League clubs are set to discuss a collective wage deferral agreement at a meeting with the Professional Footballers’ Association on Wednesday.

The proposal is one option to help clubs facing financial struggles during the coronavirus crisis.

Professional football in England has been suspended until 30 April at the earliest because of the pandemic.

It is widely accepted that a return is likely to come at a later date.

The Premier League and English Football League (EFL) are both committed to finishing the season but have said they will resume “only when it is safe and conditions allow”.

On 18 March, the EFL said it would release a £50m fund to help its clubs cover shortfalls this month. Wednesday’s meeting will now focus on how to cover April’s costs without any football.

Premier League clubs are also conscious that not finishing the season could mean they owe broadcasters about £760m.

Talks will centre on whether clubs need to defer wages among players and if a collective agreement can be reached. It is also understood the Professional Footballers’ Association (PFA) will ask clubs if wage deferrals are justified in some cases.

Players at Championship leaders Leeds United have already volunteered to take a wage deferral, while Birmingham City’s players who earn more than £6,000 a week have also been asked to take a 50% cut for the next four months.

But the PFA is urging other clubs to involve the union and for a collective approach to be taken.

There are also understood to be reservations from other clubs who feel they have been more careful with their finances and do not want to be forced into a generic agreement.

Wednesday’s meeting will discuss cash flow data from clubs and consider any updates issued by Fifa and Uefa, the world and European governing bodies, who are also set to meet earlier on Wednesday.

That meeting will look at matters such as player contracts and the transfer system, which could impact English football.

The PFA is also set to meet the Football Association about the future of women’s football in England.