Competitive maiden with many first starters, out of the raced brigade the Bjorn Baker-trained 2. Perigord looks the one to beat, coming off a nice debut at Kembla over 1000m where the colt jumped quick to lead and condition told late, with that run under its belt and the general improvement between runs he should be hard to run down. 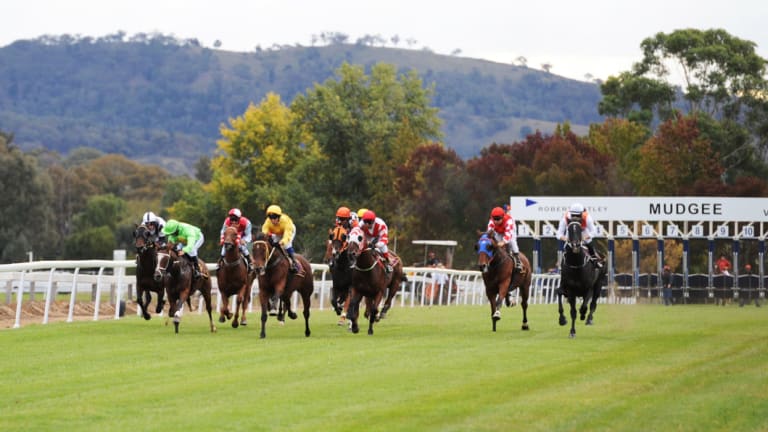 Big day out: the Mudgee Cup is the feature on an eight-race card.

Dangers: Gold Coast trained 7. Mornay was good in a recent trial at Newcastle sitting behind the speed and cruising to the line hard held over 800m making up good ground late.
How to play it: Perigord to win.

Very even field here over the 1400m with many chances, the Dar Lunn-trained 2. Zoutenant drops in grade and looks well placed here, has been consistent in his last two runs at Dubbo and Narromine and steps back to his preferred 1400m, should be able to sit outside the lead and will run the trip out strong.
Dangers: 4. Prima Stella worked too hard last start early at Wyong and dropped out in the straight, will be able to get to the front here without doing any work.
How to play it: Zoutenant to win.

Cameron Crockett-trained 5. The Warlord looks to peak here third-up from a spell after two solid runs at Quirindi and Narromine and steps up to the 1500m here which suits, gets an uncontested lead from barrier 2 and with the lack of early speed should be able to pinch some easy sectionals.
Dangers: Locally trained 7. We Can’t Be Beaten hit the line well over the unsuitable 1280m last start at Orange, up in distance here and second up suit, the in-form Greg Ryan retains the ride and should be able to find a nice position one off the rail midfield.
How to play it: The Warlord to win.

Andrew Banks keeps the ride on the Connie Greig-trained 12. Southern Strategy in a very open maiden, was a good effort at Newcastle last start where he had to work hard early to sit outside the lead and got grabbed right on the line with a big gap to third, will cross them to lead and give a good sight at odds.
Dangers: 7. Concours was good on debut at big odds at Gundagai showing nice early pace and sticking on well over 1100m after getting bumped badly in the straight, gets a beautiful run from barrier 1 behind the speed. Locally-trained 5. Trojan has finished within a length of the winner in his last three starts and will run well again.
How to play it: Southern Strategy each-way.

Trainer Nathan Doyle’s last-start winner 10. Delchuzy steps up in grade here after being heavily backed first-up at Dubbo and leading all the way over Philadora which has run well since. There was a big gap to third and a bit of early speed in the race here so will need a clean getaway but if he can find the front again will be hard to run down.
How to play it: Delchuzy to win

Big field to take on the sprint distance of 1100m here, the lightly trained 5.Yalanji was heavily backed last start at Canberra and got the job done with ease finishing powerfully late over 1000m recording some quick sectionals over the last 600m, will look to be prominent from the inside barrier .
Dangers: The local 3. Andy’s A Star looks the main danger after sitting wide midfield over 1300m at Narromine, with the drop in distance they will look to be positive from the wide draw.
How to play it: Yalanji to win, quinella 5 and 3.

Once again a very open race for this year’s edition of the Mudgee Cup. Luke Pepper-trained 9. Appoint Percy comes here off the back of two wins at Canberra and drops 6.5kg from that run which is ideal, from barrier 4 will get a perfect run behind the speed and will run the 1600m right out.
Dangers: 4. Tahsin should be competitive here dropping back from city class races, was wide last start at Rosehill and looks to get a more economical run from barrier 1.
How to play it: Appoint Percy each-way.

10. Ori On Fire looks primed first-up off two very good trials, will be right on the speed, has a strong record fresh and has recorded two wins from three starts at the track.
Dangers: Big drop in grade for 2. Powerline, has been ultra-consistent this preparation and will be fighting out the finish with the in-form Andrew Gibbons on board.
How to play it: Ori On Fire to win.

Dolphins release troubled Isaiah Wilson days after trading for him