Nat Sciver hopes the England and Wales Cricket Board’s support of the Rainbow Laces campaign can show the LGBT+ community that they will be accepted.

Sciver is engaged to Trent Rockets and England team-mate Katherine Brunt and says she has never felt afraid to disclose her sexuality – though accepts some people are not so confident.

The ECB is supporting equality charity Stonewall’s Rainbow Laces campaign for the fourth year, with players wearing rainbow laces across matches in The Hundred and One-Day Cup this weekend and the stumps in both competitions rainbow branded. 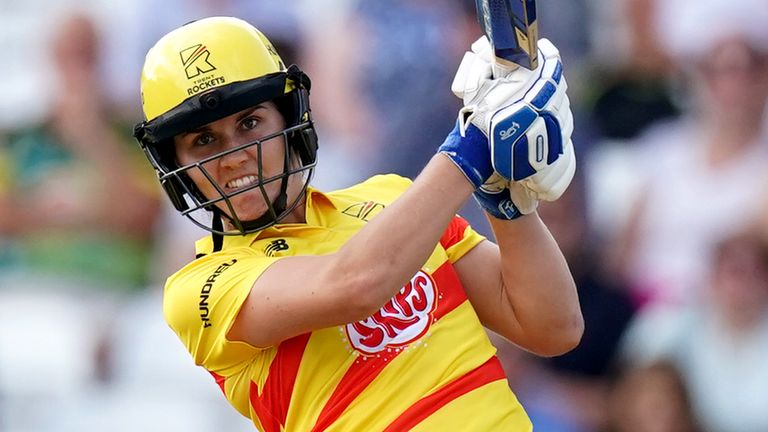 England all-rounder Sciver told Sky Sports: “I guess there is always someone out there who needs a bit of encouragement or needs to know it is okay to be yourself.

“I feel very comfortable and I had no qualms telling my team-mates and, I guess, the world, but I know it’s not the same for everyone so hopefully this campaign can still help some people.

“I think it will always be relevant and it has become a campaign that is linked with our summer.”

Sciver’s England team-mate Tammy Beaumont says the Rainbow Laces campaign being promoted during The Hundred, a tournament in which men’s and women’s cricket has been placed on an equal footing, is crucial.

The London Spirit batter said: “It’s great to see so many role models from different ethnicities, religions and sexualities. It’s brilliant that we as a sport can be so inclusive.

“Cricket is a game for everyone and it should be completely inclusive for everyone who wants to play, regardless of your sexuality, gender or anything like that. It’s important to have the Rainbow Laces campaign and show everyone is welcome in cricket.

“As a current England player, we just want a really inclusive group. However you want to live your life, you are part of our team. You see people play so much better because of it.”

MCC president and former Sri Lanka star Kumar Sangakkara added of the campaign: “It’s vital. Not just in cricket but in all walks of life for you to be accepted, supported and loved for who you are and to be able to be that without fear of judgment.

“I think it is also important for players to realise the voice they have in terms of giving back, in terms of social responsibility having been given fame, notoriety and a stage.”

Where are Gareth Bale's Tottenham team-mates from 2007 debut against Man Utd, from Steed Malbranque to Pascal Chimbonda?

British and Irish Lions: Marcus Smith to make his Lions debut against Stormers