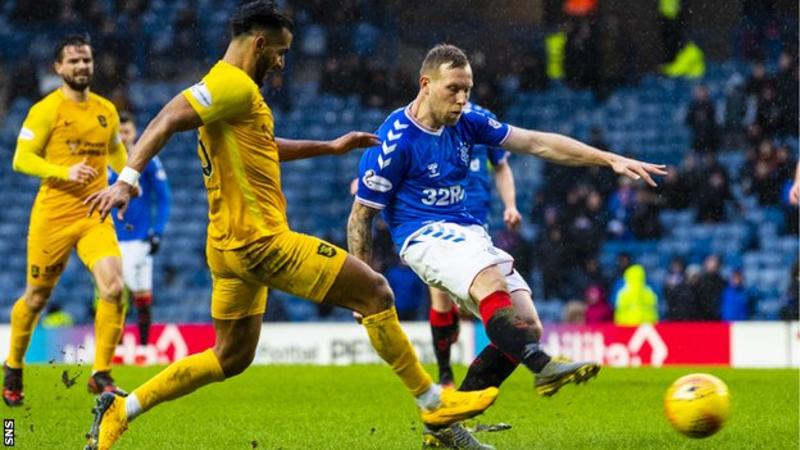 The game was originally scheduled for Saturday afternoon, but was put back 24 hours due to a waterlogged pitch.

But Arfield scored the match’s only goal with half an hour remaining, having been set up by Ianis Hagi.

The result keeps Rangers 10 points adrift of leaders Celtic, who beat Aberdeen earlier in the day, though Steven Gerrard’s men have a game in hand.

Livingston, who struck the post late on through Lyndon Dykes, are four points behind Aberdeen in third place, with a superior goal difference.

Visiting manager Gary Holt brought in keeper Schofield for his first league game as Rangers loanee Robby McCrorie was unable to play against his parent club.

Aymen Souda had an early angled drive which missed the target but was kept in by the strong wind. The Livingston defence repelled several crosses into the box and in the 17th minute Schofield denied home striker Alfredo Morelos inside the six-yard box.

Moments later, Ryan Kent curled a shot just past the far post after being sent clear by Arfield in a swift counter-attack, before Nikola Katic headed over from 12 yards after an attempted clearance looped into the air.

In the 35th minute Davis played in left-back Halliday, but Schofield brilliantly tipped his toe-poke from close range on to the bar and over for a corner, but again Gerrard’s team failed to capitalise.

Schofield again came to the West Lothian side’s rescue when he blocked a drive from Davis after the Northern Irishman had been slipped in by Hagi, and then saved a low drive from Kent in the 54th minute.

At the other end, Rangers keeper Allan McGregor had to make a superb save from Souda’s acrobatic close-range strike to keep the game goalless.

The unmarked Arfield changed that when he took a pass from Hagi, turned and beat Schofield with a powerful drive for his fourth goal in three games.

Morelos had the ball in the net in the 71st minute but the flag was up for offside.

Almost 10 minutes later Livi striker Dykes took a pass from substitute Dolly Menga and crashed a volley off the post with McGregor beaten, before testing the Rangers keeper with another drive.

The visitors continued to push for an equaliser but their efforts were in vain. Rangers nearly doubled their lead late on, but the offside flag denied substitute Florian Kamberi after he had netted.

Nikola Katic (Rangers) wins a free kick in the attacking half.

Attempt saved. Lyndon Dykes (Livingston) left footed shot from outside the box is saved in the top centre of the goal.

Attempt missed. Connor Goldson (Rangers) header from the centre of the box is too high following a corner.

Lyndon Dykes (Livingston) hits the left post with a right footed shot from outside the box.

Nikola Katic (Rangers) wins a free kick in the attacking half.

Ianis Hagi (Rangers) wins a free kick in the defensive half.

Attempt missed. Ryan Jack (Rangers) right footed shot from outside the box is close, but misses to the right.

Robbie Crawford (Livingston) is shown the yellow card for a bad foul.

Attempt saved. Aymen Souda (Livingston) right footed shot from the centre of the box is saved in the bottom left corner.

Aymen Souda (Livingston) wins a free kick in the defensive half.

Jose Mourinho sacked: How long did the ex-Chelsea boss last at Man United, what was his record and did he win any trophies?

As losses pile up, Fizdale gets needed hug from his old friends