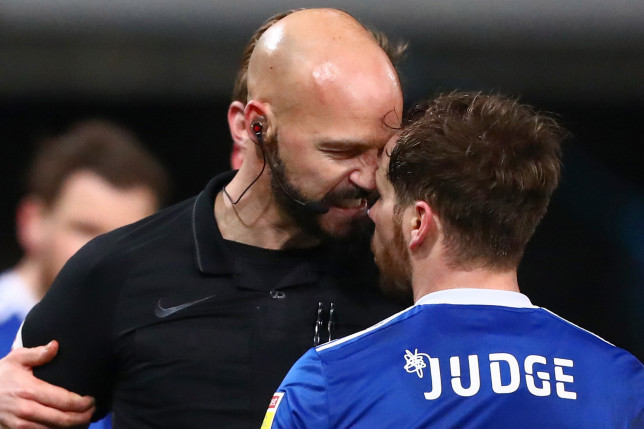 Football fans the nation over are debating what fate should befall referee Darren Drysdale for menacingly squaring up to a player on Tuesday night.

Personally, I’m torn between a two-week, all-expenses paid holiday to the Maldives or a straight-up knighthood. Maybe the latter is a bit too much. An OBE would suffice.

The incident happened during an otherwise unremarkable goalless draw between Ipswich and Northampton. Drysdale waved away Alan Judge’s claims for a penalty, before the 5ft 7in midfielder gave him a bit of verbal stick, provoking Drysdale into his best impression of an extra from the film Snatch.

Lets be very, very clear about this. They only squared up. They didn’t even come to blows and there was no need for a St John Ambulance to attend the scene.

However, the whole ballyhoo looked worse because Drysdale is built like a brick outhouse and stands at the unofficial height of 8ft 3in. It was akin to watching Tyson Fury physically threaten Jimmy Krankie.

‘I’m sorry that I did not do that last night and I can only apologise to Alan and Ipswich Town.’ And that should be that. A slap on the wrist. A trip to the naughty step for a handful of games, maybe a few match fees going to an applicable charity.

These are difficult times for us all, for different reasons and to varying extents, and most of us are full of anxiety and stress. For a split second, a human being lost his cool, then regained it almost immediately. No harm done.

The FA does not need to make an example out of Darren Drysdale but instead should set an example by employing common sense and compassion.

Without doubt, we cannot have referees and players going nose-to-nose but that is not a genuine problem facing football today. It almost never happens. The constant verbal abuse and physical intimidation of referees by players, on the other hand, happens at almost every game.

So, if the book is being readied to chuck at Drysdale, then I’m sure those calling for his severe punishment will also support lengthy bans for any players, managers or coaching staff who surround officials in numbers, or bound towards them, faces snarled and swear words spraying from their mouths. Otherwise, the hypocrisy is there for all to see.

At the time of writing this column, Drysdale has been stood down from Southend’s clash with Bolton at Roots Hall tomorrow. Rumours are also circulating he will be taking on Deontay Wilder at the MGM Grand in Las Vegas on July 23.

How PSG could line up vs RB Leipzig with no Neymar, Mbappe or Icardi boosting Man Utd's Champions League chances