Australian Daniel Ricciardo sealed his long-awaited return to the top step of the podium at one of Formula One’s signature races at Monza with his trademark “shoey” celebration.

But it was his beaming ear-to-ear grin that will be remembered most from the post-race celebrations, even more than drinking champagne out of one of his boots. 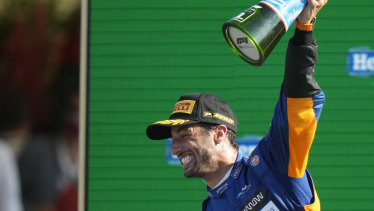 Daniel Ricciardo celebrates his victory at Monza in Italy.Credit:AP Photo

Ricciardo hadn’t led a Formula One race since his Red Bull days in 2018, leading some to question just where his speed had gone.

But as he crossed the finish line head of teammate Lando Norris for the first one-two finish achieved by any team so far this season – including the pace-setting Mercedes and Red Bull – Ricciardo had a simple statement.

“For anyone who thought I left – I never left. I just moved aside for a while,” he said over team radio.

The victory was McLaren’s first since 2012 – astonishing given the championship pedigree of one of the sport’s most famous outfits.

“About… time,” Ricciardo said to Sky Sports’ Paul di Resta in his post-race interview before climbing to the top step of the podium.

“It worked well for me yesterday [Saturday], and to be honest even if we got the start [from second on the grid] it was never a guarantee we’d lead the whole race.

“I was able to just hold firm out front [in] the first stint. I don’t think we had mega speed but it was enough to keep Max [Verstappen] behind.

“To lead literally from start to finish – I don’t think any of us expected that.

“There was something in me on Friday – I knew something good was to come.” 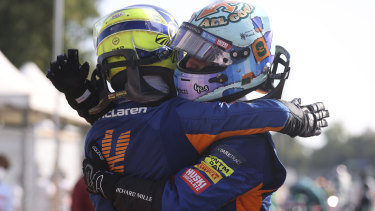 Ricciardo then joked about his recent indifferent form, saying: “I’ve just been a sandbagging SOB this whole year. Thirds, fourths, fifths – you might as well win.

Title aspirants and rivals Lewis Hamilton and Max Verstappen took each other out of the race, so while McLaren celebrated, the pair and their teams clearly had nothing to smile about.

They collided and crashed out after their pitstops, with Verstappen lifting off the kerb and ending up on top of Hamilton’s Mercedes in the gravel, with the halo head protection device keeping the champion out of harm’s way.

Both climbed out after the accident at the first chicane, with Verstappen’s five-point lead in the championship unchanged.

Ricciardo’s win was his eighth in the world’s best motorsport category, while Norris’ second place – which was put beyond doubt when he was given “team orders” to not try and challenge Ricciardo for the victory – equalled his highest race finish.

Ricciardo’s victory was set up after he overtook pole-sitter Verstappen at the start of the race. His day finished in style with the fastest lap of the race.

La Liga returns: What you need to know as Spanish football resumes