Bannister was the first sub-four-minute miler in history. 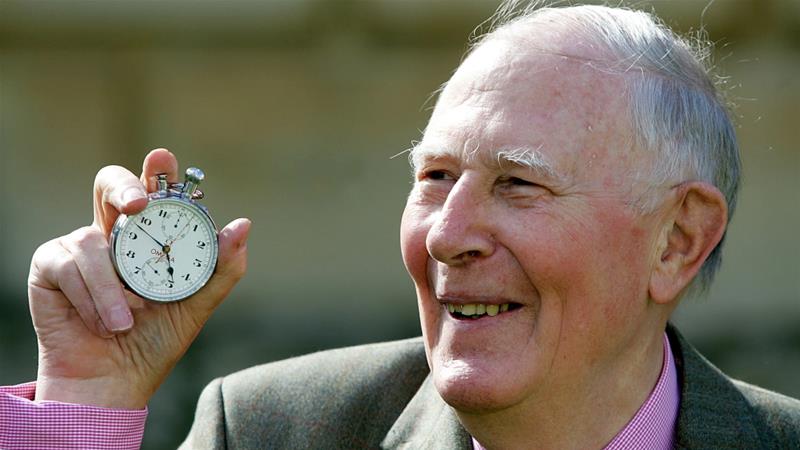 Roger Bannister has died, aged 88, but will live forever in the annals of athletics history as the first man to run a mile in under four minutes.

A statement from his family on Sunday said: “Sir Roger Bannister died peacefully in Oxford on 3 March, aged 88, surrounded by his family who were as loved by him, as he was loved by them.

“He banked his treasure in the hearts of his friends.”

British Prime Minister Theresa May led the tributes to the former athlete, who later became one of Europe’s leading neurologists and was made a knight.

“Sir Roger Bannister was a great British sporting icon whose achievements were an inspiration to us all. He will be greatly missed,” she said on Twitter.

The record-breaking run was on the Oxford University track during a local athletics meeting, with only a few spectators witnessing the Englishman’s destruction of the myth that no human being could run so fast.

Bannister made headlines around the world at the age of 25. His achievement opened the physical and psychological door for many other milers, who have since beaten his time of three minutes 59.4 seconds.

Roger Gilbert Bannister, born in Harrow, a London suburb, on March 23, 1929, was a shy, gangling medical student who preferred to be an oarsman rather than a runner.

In 1946, when he went to Oxford, his great ambition was to row against Cambridge in the annual boat race on the Thames.

But Bannister, who stood 1.8 meters tall and weighed only 68 kilograms, was told he was too light to make a first-rate oarsman.

So he turned to running and his new ambition became to win the 1,500 meters at the Olympic Games in Helsinki in 1952.

Bannister started a five-year build-up, and, in 1947, at the age of 17, ran his first mile race at Oxford, finishing second in a time of just over five minutes. Later that year, he won the mile for Oxford against Cambridge in an athletics meeting.

He asked for his name to be withdrawn from a list of 1948 Olympic possibles and continued his careful preparations for the 1952 games. But he managed only fourth place in the Helsinki Games 1,500 meters final.

The press criticized him for faulty training methods. Bannister, nicknamed the “lone wolf miler” because he scorned coaches, had worked out his own training schedule to fit in with his studies.

After Helsinki, he became the forgotten man of athletics. But he had set his sights on the four-minute-mile – a challenge which had fascinated athletes and enthusiasts for years.

The world record was gradually being whittled down and a number of athletes were considered capable of crashing the four-minute barrier.

With American Wes Santee trying to lower his US record of four minutes 2.4 seconds, the pressure was on and four-minute-mile fever was mounting. To Bannister, the challenge was not only to break the barrier but to be the first man to do so.

The Oxford University versus Amateur Athletics Association fixture of May 6 was the first competition of the British season of 1954. Bannister, by then a medical student at a London hospital, set that day for his attempt.

He enlisted the aid of his training companions and friends, Chris Chataway and Chris Brasher, top athletes in their own right, as pacemakers.

May 6 was cold, wet and windy – not ideal for a record-breaking attempt. Bannister thought of calling it off, but, after a short rain shower and with a drop in the wind, he said: “Right, I’ll try.”

After a false start by pacemaker Brasher, the field of six got away. Bannister urged Brasher to go faster and at the halfway mark called on Chataway to take over from the tiring Brasher.

Then, 210 meters from the tape, he pulled out from behind Chataway to immortalize himself as the first sub-four-minute miler.

Seven weeks later, Landy beat Bannister’s record, with a mile in three minutes 57.9 seconds, and, in August, Bannister lowered his own time to three minutes 58.8 seconds, beating Landy at the Commonwealth Games in Vancouver, Canada.

In August 1954, Bannister captured the European 1500 meters crown. Having qualified as a doctor, he retired from active athletics at the end of 1954 to pursue his medical career.

By 1963, he was established in his profession as a consultant in nervous diseases at three hospitals, and, a year later, he became a member of Britain’s Advisory Sports Council.

In 1971, aged 42 and a father of four, he was appointed by the government as the first chairman of the Executive Sports Council designed to finance and promote British sport.

He was awarded a knighthood in 1975. He became president of the World Sports Council in 1976 and in 1977 was the first Briton to win West Germany’s Hans-Heinrich Siegbert prize for his services to sport.

Oxford University elected him Master (head) of its Pembroke College in 1985.

Bannister gave up his medical practice after a serious car accident and devoted himself to research. He became director of the National Hospital for Nervous Diseases in London and edited a textbook on nervous system disorders.

His prediction that the mile record would be progressively lowered was born out in subsequent years. In 1999, Moroccan Hiram El Guerrouj became the 13th record holder since Bannister, lowering the time to 3:43.13.

On the allure of the four-minute mile:

“It was a target. University athletes had been trying for years and it just didn’t seem to be capable of being broken. There was a magic about four symmetrical laps of one minute each. It was just something that caught the public’s imagination.

“Even then people were talking about whether it would ever be possible for someone to run a mile in four minutes … There was no logic in my mind that if you can run a mile in four minutes, 1.25, you can’t run it in 3:59 … I knew enough medicine and physiology to know it wasn’t a physical barrier, but I think it had become a psychological barrier.”

On his drive to be the first to break the four-minute barrier:

“It stood there as something that was waiting to be done, and I was in the right place at the right time and was ready to do it. My attitude was that it can be done, and it will be done soon, and I’d rather it were done here.

“I thought it would be right for Britain to try to get this. There was a feeling of patriotism. Our new queen had been crowned the year before, Everest had been climbed in 1953. Although I tried in 1953, I broke the British record, but not the four-minute mile, and so everything was ready in 1954.”

On the bad weather on the day of his attempt and his uncertainty over whether to run:

“I was using a flag on a neighboring church, a St. George’s flag. I noticed it fluttering and I used that as a measure of the strength of the wind. And I felt that just 20 minutes before, it was not fluttering as strongly. … I calculated there’s a 50-50 chance of my doing it. I said, ‘If there’s a 50-50 chance and I don’t take it, I may never get another chance to beat (John) Landy to it.’ So I said, ‘Let’s do it.’”

On the size of the crowd at Oxford’s Iffley Road track on the day of his run:

“If the number of people who have come up to me saying they were there, they would have fit into Wembley Stadium. Matter of fact, there weren’t more than 1,500. I hadn’t advertised the fact. Word got out that I might break the four-minute mile, but I didn’t want to be rail-roaded to being committed to running it if the conditions were absolutely hopeless.”

“Chris Brasher was leading. He was a steeplechaser. I settled back. First lap, 58 seconds, and then as one hoped, he took us through the half-mile in 1:58. Then during the lap in which Chris Chataway took over, inevitably he was tiring. Three quarters, I heard was three minutes, 1 second. I knew I had to do the last lap in 59. At 300 meters, I overtook him. I then went flat out for the finishing line and just about managed to stagger over it, all in. I couldn’t stand at the end. I had always been able to take more out of myself than there was in the final sprint and I did on that occasion.”

On the announcement of his time by Norris McWhirter:

“He had carefully rehearsed. He announced: ‘The result of event No. 8, one mile, was R.G. Bannister, of Merton and Exeter Colleges, in a time which subject to ratification, is a new track record, a new British all-comers record, a new European record, a new Commonwealth Empire record, a new world record in three …’ That was when the crowd exploded and we didn’t hear any more. It didn’t matter what the rest was.”

On his showdown against John Landy at the Empire Games in Vancouver, British Columbia:

“I knew that more important than the four-minute mile, from the point of view of my career, was whether I could or could not defeat John Landy. The Empire Games in Vancouver were the important settling of the score. If I didn’t manage to defeat John Landy there, he would be the world record holder and have the right to be the best miler in the world.”

“He went into the lead. The first half-mile was just on two minutes. At three-quarters he seemed to be getting away from me and there was a gap of about 12 yards at one point. But I managed to close the gap during the third lap, and then on the last bend he looked over his left shoulder and I chose that moment to overtake him and we managed to finish in that order: Bannister one and Landy two, by about four yards.” 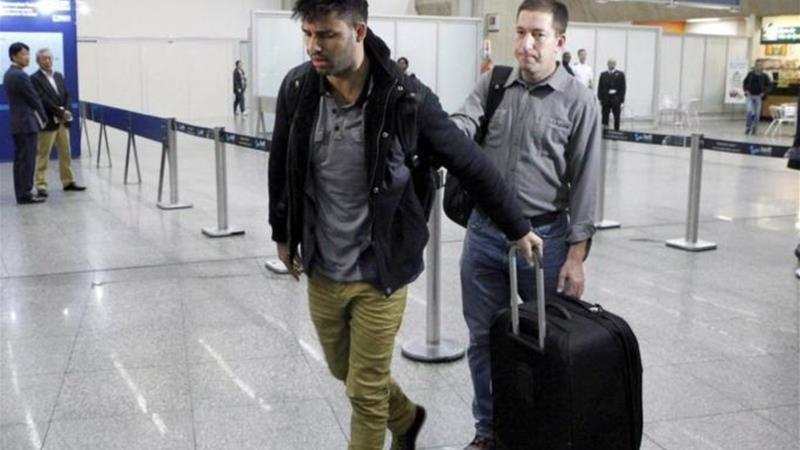 Is the UK intimidating journalists?