What is it with those type of mad bastards, anyway? Why do obsessive nutters through the ages and around the world risk their lives to climb near unclimbable mountains, trek near untrekkable distances, run across entire countries and try to row across whole oceans?

I am not sure that I know the answer, but suspect it has something to do with that wonderful quote from Walter Scott – ah, sing it, Wally! – ‘‘One hour of life, crowded to the full with glorious action, and filled with noble risks, is worth whole years of those mean observances of paltry decorum, in which men steal through existence, like sluggish waters through a marsh, without either honor or observation.’’ But how funny I should say that … 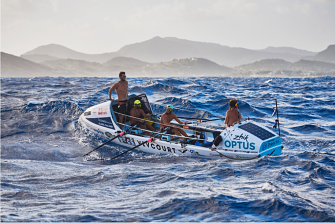 A crew in the Talisker Atlantic Challenge.

For you see, about six months ago, Sam Horsely, a 24-year-old graduate of the Shore School – thank you, I know – approached two of his closest mates from the Shore Rowing VIII back in the day, James Samuels and Rob Wells, and another rowing mate from Riverview, Louis Hugh-Jones, with an idea.

‘‘One hour of life, crowded to the full with glorious action, and filled with noble risks …’’

It took a little more talking but, in truth, the other three were remarkably easy to convince.
Horsley was referring to an annual race, the Talisker Whisky Atlantic Challenge, which starts in the Canary Islands in the West Indies and goes for 2550 nautical miles of ocean to finish in Antigua off the coast of Africa. Sam proposed they enter, raise money to get a covered row-boat they could both row and live in, and then raise money through sponsorships for a charity, and hopefully as much as $250,000. 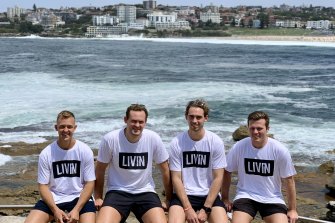 Which charity? After discussion they go with LIVIN, devoted to ‘‘breaking the stigma surrounding mental health’’.

How, specifically, will they do it? Not so easy, Campese. Two men on the oars at any given time going for two-hour shifts, while the other two rest and eat, and then change over. Do that for 24 hours a day, for about forty days and forty nights, add water – a lot of it, some of it coming in 10-metre waves – mix, and maybe, finally, call the once mighty Atlantic your pigeon.

And then they got busy. 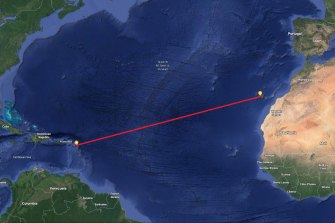 For a boat, they’ve set their sights on a second-hand beauty, seven metres long by two metres wide, with just enough space inside for two bunks, a small kitchen and storage facilities for their food and clothing. For training with big waves, they have joined North Bondi Surf Life Saving Club and are regularly going out in their surf boats looking for curly monsters with wind whipping the spray into their face, that they can look out and not blink as they learn how to go ——upppppp, and over! – and on again.

What if it does capsize?

Don’t ask me how, but the boat is designed to right itself, and each rower will be tied to it at all times.

There are a couple of complications.

Wells, 24, who is studying to be a doctor, has a certain fear of deep water.

Samuels, a building foreman, has something called ‘‘Raynaud’s disease’’ meaning he is prone to have his hands and feet turn numb with cold, and he has a certain phobia about sharks.

Sam, an environmental and sustainability consultant, is prone to coming up with crazy ideas, which is where all the trouble started …

And Louis is a financial consultant prone to being talked into things by mad bastards!

Anyway, you get the drift. They will not be drifting. They’ll be rowing, and need money to get this show on the road, ready to race next year.

Here is the link to the fundraising page.

And maybe pin that quote to a brass plaque in front of the man on watch, come the inevitable dark and stormy night when you wonder why you are doing this mad thing.