Olympic swimmer Leisel Jones has urged Swimming Australia to investigate the treatment of women and girls in the sport “very, very seriously”, with the aim of cleaning up the sport and making it a safe environment.

Speaking on ABC’s Outsiders on Sunday, Jones said Swimming Australia needed to do their due diligence in ensuring the sport was safe for women, who often come into the sport at a very young age.

Swimming Australia are commissioning an independent, all-female panel to investigate the treatment of women in the sport after Olympic silver medallist Maddie Groves withdrew from this year’s trials, citing “misogynistic perverts” and a culture of body-shaming. 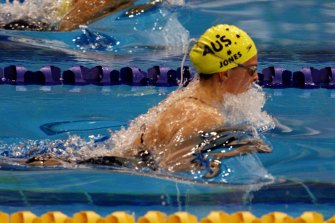 Olympic swimmer Leisel Jones has urged Swimming Australia to take its investigation into the treatment of women and girls in the sport “very very seriously” with an aim of cleaning up the sport. Credit:Iain Gillespie

But Jones said Groves may have felt uncomfortable going to Swimming Australia over her concerns, and that is why she took to social media instead.

Groves said last year she made a complaint about an incident but Swimming Australia said it had no record of the allegation.

“That could be absolutely possible in the way that maybe she didn’t feel heard and this was the way to get her voice out there,” Jones said on Sunday morning.

“I hope that wasn’t the case. We need to hear those voices.”

The Swimming Australia board will meet next week and will begin to form the independent female panel for the investigation.

“That’s most important…to make sure that we are cleaning out the sport if those people exist and really making sure our sport is as healthy as it possibly can be,” Jones said.

Alexander-Arnold, Dier and Abraham could be big-name casualties of Southgate's Euro 2020 squad but Pickford set for No1