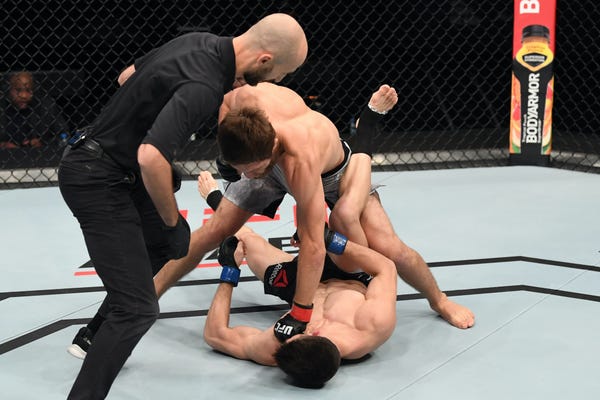 Said Nurmagomedov forced a 51-second knockout with some of the fastest, nastiest ground-and-pound you'll see in the UFC during the MMA firm's ongoing residency on Fight Island, Abu Dhabi.

As it was his first match of the year, the 28-year-old Dagestani would likely have been looking to make a statement following a decision loss to Raoni Barcelos in Busan, South Korea, in 2019.

Striegl never looked like winning the bantamweight fight when the opening bell chimed at the behind-closed-doors at the Flash Forum — a purpose-built venue the Abu Dhabi culture and tourism board built in conjunction with the UFC.

The Filipino threw pawing shots, and missed the target with strikes he had hoped would be significant.

Showing patience, Nurmagomedov caught an attacking Striegl with a counter left punch which dropped his opponent.

Striegl appeared to panic when he was getting back to his feet and attempted a single-leg takedown, a move which Nurmagomedov caught, and forced his man back to the mat not with wrestling but with an unrelenting barrage of rapid-fire punches.

Straddling Striegl, Nurmagomedov then rained shots down, cracking his skull until the referee waved the bout off.

The referee had seen enough. It was all over.

UFC statistics underline Nurmagomedov's dominance as he landed 18 of his 24 strikes (75% accuracy), and was hit just three times in return (two of which were from kicks to his legs).

Jose ‘Chema’ Busceta: The coach behind the unfinished story of a fearless GB basketball team

Mets’ Luis Rojas earning place in family dynasty: ‘Had to be a manager’