Top Australian swimmers are divided on FINA’s decision to restrict the participation of transgender athletes in elite women’s swimming. 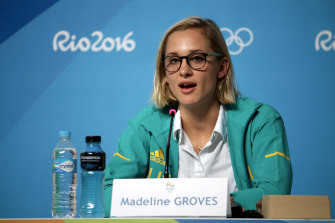 Madeline Groves has voiced her dismay at the decision.Credit:Getty Images

“Shame on everyone that supported this discriminatory and unscientific decision.”

Earlier, four-time Olympic champion Cate Campbell told FINA’s extraordinary general congress (EGC) in the early hours of Monday morning (AEST) that she supported a restriction on transgender athletes competing in women’s categories and urged people to “listen to the science and experts”.

“Women, who have fought long and hard to be included and seen as equals in sport, can only do so because of the gender category distinction,” Campbell said before delegates voted in favour of the ban.

“To remove that distinction would be to the detriment of female athletes everywhere.”

FINA made the decision at its EGC after members heard a report from a transgender task force comprising leading medical, legal, and sports figures.

Five-time world champion Seebohm, who won a medley relay gold medal for Australia at last year’s Tokyo Games, said the decision would encourage swimmers to stay in the sport.

“I’m finally happy that we have a decision, and we know where the sport’s going and what we’re going to be doing,” the 30-year-old told Sky News on Monday.

“We just didn’t know what was going to happen and when we just don’t know, it’s hard to commit fully to our sport if we have no idea the direction it’s going to go.

“We can all move on. We can all just go back to the sport that we love…and know that we’re getting in the pool, and it’s going to be a fair, level playing field and that’s what we want.”

“If we truly want to protect women’s sports, we must include all women,” the group tweeted.

Transgender rights has become a major talking point as sports seek to balance inclusion with fairness.

The debate intensified after University of Pennsylvania swimmer Lia Thomas became the first transgender NCAA champion in Division I history after winning the women’s 500-yard freestyle earlier this year. 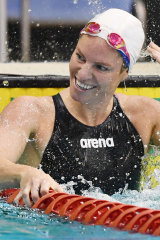 FINA said it will create a working group to establish an “open” category for them in some events as part of its new policy.

“While inclusivity must be respected, fairness in competition is a core value of sport,” a spokesman said.

“FINA has made a decision based on the circumstances in the sport of swimming to achieve that balance.”