Philadelphia 76ers star Ben Simmons will not turn up for the start of training camp next week and intends to never play another game for the team, ESPN reported on Wednesday (AEST).

The three-time All-Star point guard has not spoken to team officials since last month and appears determined to force the Sixers to find a trade partner, per the report. 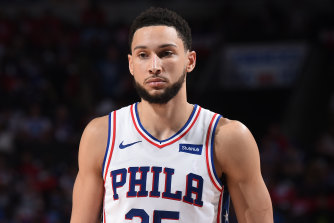 Australian NBA star Ben Simmons will not report for spring training with the 76ers.Credit:Getty

AP has also reported that a person with direct knowledge of Simmons’ plans had confirmed the stance. The person spoke on condition of anonymity because discussions of Simmons’ plans with the franchise have been private.

Simmons, 25, could be fined and/or suspended if he skips training camp, which opens on September 28.

His relationship with the franchise soured during the 2021 NBA play-offs. The 76ers, the No.1 seed in the eastern conference, lost to the Atlanta Hawks in seven games in the second round.

Simmons is a talented playmaker and defender, but his inability – or unwillingness – to take shots proved costly during the series with the Hawks. He also drew criticism for his performance at the foul line. He made just 34.2 per cent of his attempts (25 of 73) in 12 play-off games after shooting 61.3 per cent during the regular season.

Asked after the game seven loss if Simmons could still be a point guard for a championship contender, coach Doc Rivers said he didn’t have an answer.

Star teammate Joel Embiid also pointed a finger at Simmons for the loss, the comments seemingly creating a rift that would see the 25-year-old guard from Australia likely never play a game again for the Sixers.

Embiid, though, tweeted his support for Simmons on September 1.

“I love playing with Ben,” he wrote. “Stats don’t lie. He’s an amazing player and we all didn’t get the job done. It’s on me personally. I hope everyone is back cuz we know we’re good enough to win.”

The 76ers are scheduled to have media day on Monday, with training camp opening the next day at their complex in Camden, New Jersey.

Sixers president Daryl Morey tiptoed around the Simmons issue in June, yet he said he still believed the guard could be part of a championship nucleus.

“Not addressing Ben Simmons, but any move that will help our team win the championship or improve our odds, we will look at or do if it makes sense,” Morey said.

The Sixers can let Simmons sit and fine or suspend him, or withhold his pay while Morey canvases the trade market looking for a quality offer — complete with draft picks — for the disgruntled star. Simmons was an NBA All-Defensive first team selection, and his size and strength should make him attractive to some team willing to take a flier on a project with potential.

Without Simmons — or a viable replacement in a trade — the 76ers would be stuck trying to replace him at point with second-year guard Tyrese Maxey. They could also move Seth Curry to point and start defensive menace, and fellow Australian, Matisse Thybulle.

One thing is clear: The issue is unlikely to be settled by the start of the season.

Simmons has chalked up the criticism to playing in Philly.

No one fancies Man Utd to beat Liverpool, but there are three ways Ole’s men could spring massive shock – The Sun