Jack Marton has been to the Olympics before, in Beijing in 2008 and Rio in 2016. On those occasions he went to support his sisters who were competing, but in Tokyo he will be the one flying the flag for Australia, in taekwondo.

Because he’d been to Beijing and Rio he thought he’d know what to expect: the crowds, the buzz, the village, the interaction with other athletes. Not in Tokyo, though, with coronavirus making the Olympic experience virtually unrecognisable from what he had been exposed to. 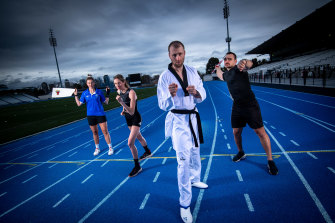 “It is going to be different for sure,” said Marton, who leaves for Tokyo on Sunday. “Stadiums are packed cheering and yelling when we compete usually. It is going to be quiet on the mat. I haven’t done something like that before. A lot of my competitors will be used to it having competed this year in Europe and Asia.

“I don’t know what to expect exactly. The dining hall is going to be minimal time spent there, glass screens separating people, three or four people per table. It is going to be small and minimalist Olympic experience.

“That part, the competition doesn’t change. You will prepare like you normally would. It’s more the external stuff. Watching other sports and mingling with other teams.”

Marton was at Lakeside Stadium on Wednesday with fellow Victorian of Institute of Sport athletes bound for Tokyo; 1500m runner Georgia Griffith, para-rowing athlete Alexandra Viney and para-javelin athlete Michal Burian (who is close to selection but not assured of a spot in Tokyo just yet).

Like the others, Viney went through a large chunk of her Olympic preparation in Melbourne’s 2020 lockdown, and says she will be ready for whatever Tokyo throws at her after she leaves for camp on August 8.

There are still unknowns for her too, like exactly where that pre-departure camp will be given Sydney is currently locked down.

“I actually couldn’t get in a boat for over five months last year,” Viney said, noting she can’t get into a boat on her own and Victoria’s pandemic restrictions only allowed single person boats to be used for training. Her teammates in her four person boat (plus one cox) continued to train in the ACT and NSW.

“I had to rely on myself and pretty much went internal for that time.

“I was training full time in the garage on the bike, ergo and then one hour outside a day.”

“I broke it down into much smaller goals and the moment we came out of lockdown I wanted to blow everyone out of the water. Tokyo was on the horizon but it was trials, nationals and little things.”