Sport Integrity Australia boss David Sharpe has urged codes to adopt a “zero tolerance” approach to illicit drug use despite the dramatic softening of the WADA policy that allowed NRL star Brent Naden to be sidelined for only a month from pre-season training.

The Penrith winger was the controversial beneficiary of the change in the World Anti-Doping Agency code after testing positive to cocaine, which he admitted he took the night before last year’s grand final against Melbourne. 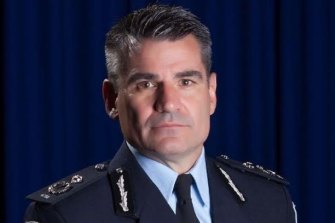 Instead of a mandatory two-year ban, Naden was suspended for one month under a change in the policy that deemed he was taking the party drug “out of competition” for recreational purposes.

The NRL was heavily criticised when the only additional sanction given to Naden was a $5000 fine for breaching biosecurity rules. Naden could have played in the opening round but coach Ivan Cleary dropped the 25-year-old from the NRL side for four matches.

Asked if codes such as the NRL should impose harsher penalties additional to WADA sanctions, Sharpe told the Herald: “Definitely. I applaud the change in the WADA code. Athletes were clearly using cocaine in a recreational sense; it wasn’t performance-enhancing. But this now pushes a lot onto the codes to really review the way they’ve addressed this issue in the past.

“Illicit drug use in sport needs to have zero tolerance. What are the codes doing around their messaging? It’s got to be a partnership. We all own it. But they have the avenue for further sanctions.”

‘Illicit drug use in sport needs to have zero tolerance. What are the codes doing around their messaging? It’s got to be a partnership. We all own it.’

Under federal legislation, Sharpe cannot comment about specific cases but admitted the growing use of illicit substances presents serious issues for sport because it brings players in contact with criminals.

For that reason, he applauded the NRL’s attempt last week to lure NSW Police Commissioner Mick Fuller onto the ARL Commission.

ARLC chairman Peter V’landys revealed to the Sun-Herald the chief motivation was the growing link between players and criminals.

Fuller’s move onto the commission collapsed after NSW Premier Gladys Berejiklian refused to approve it, but there is a trend towards influential figures with police experience joining forces with sporting bodies.

“It was really smart of the NRL to look at someone of Mick’s calibre to get some clear advice on managing those types of issues,” Sharpe said. “It is a great concern, the organised crime figures — or just crime figures — who are infiltrating sport; who are influencing players, supplying them with cocaine or other drugs, which then exposes and makes them vulnerable to criminal elements.

“WADA has addressed it in terms of performance-enhancing against the social aspect, but the minute players buy cocaine, they are exposed. Another element is the gambling, where athletes become addicted and get involved with figures who aren’t acting in the best interests of the sport. The minute they get into debt, they are vulnerable.”

SIA has come under fire for the delay in dealing with positive drug tests, most recently concerning West Coast player Willie Rioli, who is facing a ban of up to four years for alleged urine substitution during a routine anti-doping test performed by the Australian Sports Anti-Doping Authority in 2019.

Rioli faced the AFL’s Anti-Doping Tribunal in December last year but is still waiting on a result. Teammates have expressed concerns for his mental health, although the matter now rests with the AFL and not SIA.

“If a young athlete is influenced in a way that they are injecting a substance into their body, I won’t apologise that we will go to the nth degree to find out who has facilitated that,” Sharpe said. “I think we’ve come a long way since the Essendon and Cronulla days when the anti-doping process was long-winded and complicated. We were criticised about time delays, in some cases that was warranted – it was a very cumbersome process – but legislation has been introduced to speed up that process.”

Sharpe said athletes and their legal representatives were often responsible for the delays.

“Every time I am asked for an extension on a case, I’ve granted it in favour of the athlete,” he said. “No matter what the excuse is, they are always granted.”