It is not as if the masters of Tokyo 2020, who have only five more months to mobilise for an Olympic Games, need to look far for the looming peril of coronavirus. For in the port of Yokohama, a mere 40 kilometres from the New National Stadium, they can glimpse the twinkling lights of the Diamond Princess, a cruise ship fast becoming a Petri dish for a 21st-century plague.

After a week in lockdown, 218 people on board the boat have been diagnosed with Covid-19, as it is now known, making it the planet's largest repository of the illness outside mainland China. A single vessel harbours more confirmed cases than Hong Kong, Vietnam, Australia, Germany, France, the United Kingdom and the United States combined. Given that the ship had just 10 cases when it first docked, it would seem the surest way to contain an epidemic is not to quarantine several thousand people on a floating gin palace. 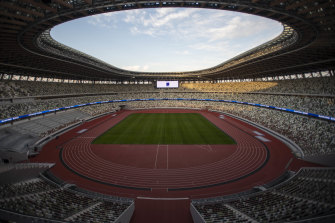 The New National Stadium, the main stadium of the 2020 Olympics and Paralympics. Credit:Getty Images

There is a reason why these giant ships are known as the Ferraris of the virus world, with their ventilation systems and congested self-service buffets creating the perfect conditions for sickness to spread. The only environment more conducive, perhaps, is the Olympic bubble, where, for 17 days, vast delegations from more than 200 countries converge to share cultures, experiences, medals and, invariably, germs. At the Pyeongchang Games two winters ago, norovirus was so rampant that by the end, the Swiss freestyle skiers had rechristened themselves "Team Noro".

Coronavirus is a far deadlier proposition and, for the Japanese hosts preparing to stage the greatest show on Earth, a matter of the utmost gravity.

Toshiro Muto, the president of Tokyo 2020, has already voiced his fear that the escalation of the virus could "pour cold water on the momentum of the Games".

At a press conference yesterday, he addressed a prospect that his city and his country dare not entertain: that the Games of the 32nd Olympiad, the second-most expensive in history behind Sochi, might yet have to be cancelled. "That," he said, sombrely, "has not been considered".

We should remind ourselves that almost every recent Olympics has been prefigured by the rumblings of apocalypse. In Athens, it was the ramshackle infrastructure, in London it was the bungled security contracts, and in Rio it was the shadow of Zika, a mosquito-borne virus that stirred enough alarmism for several celebrated golfers to decide not to travel. Six months prior to the opening ceremony at the Maracana, Forbes magazine was unambiguous, its headline declaring: "Zika outbreak means it is now time to cancel the Rio Olympics".

Mercifully, some sense was seen. One academic claimed that Brazil was being unfairly stigmatised by Zika, that the risk of visitors contracting the illness was negligible. So it proved: of the 457 American athletes, who had been the most vocal in expressing their concern about Rio, not one tested positive for Zika antibodies upon their return. This time, the equation is far less clear-cut. No one can state with any confidence how many virus carriers are in China, or even how the statistics are arrived at. The only certainty, as the Diamond Princess languishes in Japanese waters, a breeding ground for a mysterious killer, is that the emergency is intensifying.

Naturally, the co-ordinator of the athletes' village in Tokyo is worried. Public acknowledgements of the crisis have been rare in Japan, such is the fear of losing face on the global stage, but Saburo Kawabuchi conceded: "We don't have any clue when this issue will be resolved."

His is a realm that a virus could attack like a bushfire. With 18,000 athletes crammed into an area of just 44 hectares, eating in communal halls and living in each other's tracksuit pockets, any bug can morph rapidly into a contagion. 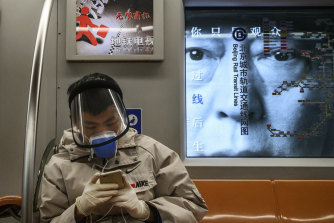 A Chinese man wears a protective mask and face shield as he rides the subway during rush hour. Credit:Getty Images

When the 2010 Vancouver Winter Olympics took place amid anxieties about swine flu, one local epidemiologist chose to use it as a case study for tracking how the illness was transmitted. No other occasion, after all, could bring such an exotic cross section of the global community together in the same place at the same time.

In the end, no flu outbreak materialised, but the sheer proximity of Olympic cohabitation makes any Games, in theory, a haven for infectious disease. Tokyo do not want to be the ones who put that hypothesis to the ultimate test.

Already, coronavirus is part of the 2020 Olympic story.

The Chinese archery team, for example, are being forced to train in isolation as the government's draconian shutdowns continue. The women's basketball qualifying tournament, scheduled for Foshan in southern China, was relocated to Belgrade.

Tokyo, where surgical masks have become de rigueur in recent weeks, is not about to take any chances.

"We must firmly tackle the new virus to contain it," Yuriko Koike, the city's governor, said in a public gathering, "or we are going to regret it."

Sport in the time of coronavirus: it sounds like the unexpected sequel to a Gabriel Garcia Marquez novel. It is also one that holds up a fascinating mirror to the ways modern society reacts to the threat of an impending pandemic.

Soccer, that symbol of an interconnected world, is showing signs of panic. Not only are Manchester United holding their plans for a pre-season tour of Asia in abeyance, but they switched their Marbella hotel for warm-weather training, having found that their original choice was recently used by Rafael Benitez's Dalian Yifang team.

Come July 24, when the Tokyo Olympics are due to be declared open, we could inhabit a very different world.

Coronavirus might have spanned the globe, or it might have been relegated to a distant memory. Either way, in the months ahead, sport's greatest showpiece promises to be a crucial battleground in the fight against a capricious and frightening foe.

How old is Vincent Janssen, when did he last play for Tottenham, and what is his goal scoring record?