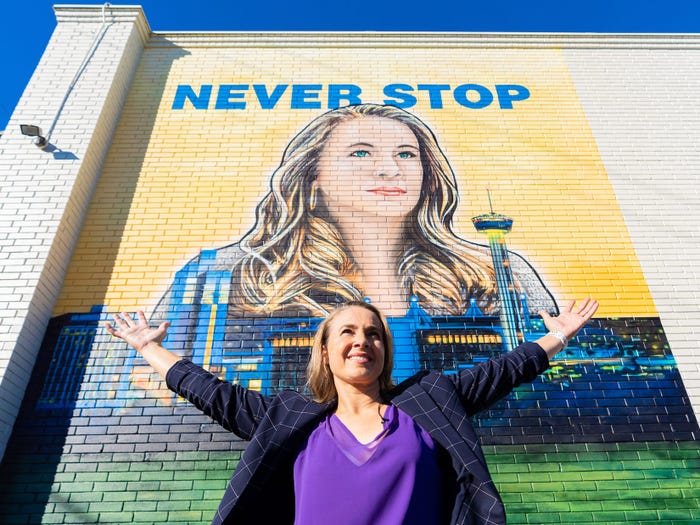 Becky Hammon has been one of the biggest names in San Antonio basketball for more than a decade.

The 5-foot-6 longtime point guard for the WNBA's San Antonio Stars was a perennial WNBA All-Star before retiring in 2014 and joining Gregg Popovich's staff as an assistant coach for the San Antonio Spurs. Now, the city where Hammon has seen so much of her success is paying homage to the legend in a huge way — literally.

Artist Sebastien Boileau honored Hammon with a giant building-side mural in San Antonio that depicts a young version of herself — wearing her legendary No. 25 Stars jersey — looking up at the boundary-breaking icon she has become in adulthood.

"It's really moving to see my image and my story captured so beautifully in Sebastian's mural," Hammon said. "And 'Never Stop' is both the perfect motto for my drive to take on new  challenges and a great metaphor for the adolescent version of myself so poetically portrayed in the piece."

In a video by 60 Second Docs — which was created in partnership with Cadillac for their "Never Stop" series — Hammon visits the mural and reflects upon her journey through the WNBA as a player and into the NBA as a highly-respected coach across the league.

Hammon describes her path as "one of resiliency" and insists that "the greatest barriers I have ever broken are the ones that I have in my own mind." But just by nature of being one of the first and one of the very few women working on an NBA coaching staff, Hammon is breaking barriers far beyond those in her own mind, inspiring countless women and girls in the process.

In fact, many of those people whom Hammon has influenced have made the trip to San Antonio's Lincoln Heights neighborhood to take in the colossal mural. The pioneer said receiving positive feedback from the sports world and young women alike left her "doubly moved."

"The idea that my career journey can inspire others, regardless of gender, to commit to their own dreams, is extremely powerful," she said.

Hammon is widely expected to become the first female head coach in NBA history. However, thus far, she has been passed over for open positions despite six years as an assistant to the legendary Popovich. In the 60 Second Docs clip, she insists that she's "not gonna stop" fighting to break the league's — and men's major professional sports — glass ceiling.

"I will be a head coach at some point," Hammon said. "As I walk through the door, the greatest thing I can do is be the best me I can possibly be and let the next girl walk through behind me."

Check out the full clip below:

As it happened: Freeman into the final, Takahashi’s marathon effort

Embarrassing Jack Grealish only apologised because he got caught and statement was ridiculous after crash, slams O’Hara – The Sun