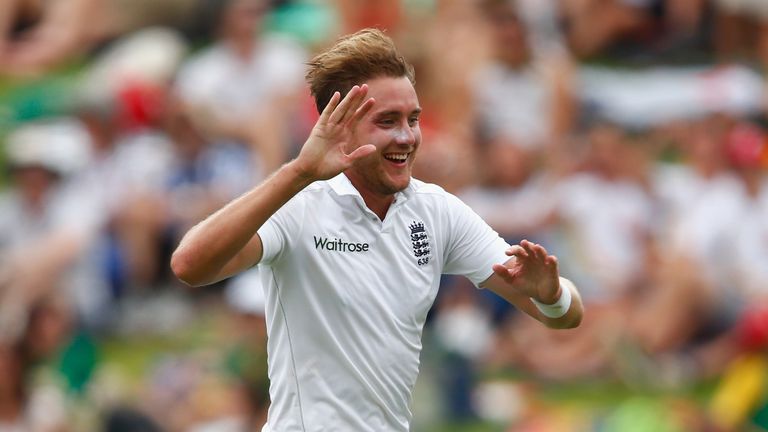 “While he is streaky, he is putting those streaks closer together. They are like London buses now and he is like an unstoppable train at times.”

Those were the words of Nasser Hussain after another Stuart Broad masterclass helped England clinch a series win over South Africa at the start of 2016. It was hard to argue, given that his spell of 5-14 at the Wanderers was the seventh time the seamer has picked up five or more wickets in a spell.

Broad is just the second Englishman to pass 400 Test wickets – and, during the past year, the 33-year-old has also overtaken the likes of Sir Richard Hadlee and Kapil Dev to become the eighth most prolific wicket-taker in Test history.

With Broad set to feature in England’s inaugural Test against Ireland this week, ahead of another Ashes series, we look at his best Test bowling figures…

In the first innings of the first Test at Lord’s, Broad set the tone for the remainder of the three-match series dominated by England. The hosts restricted the tourists to 100-4, Broad having removed opener Adrian Barath, before Shivnarine Chanderpaul and Marlon Samuels frustrated the home side with a stand of 81.

Broad returned to the attack and quickly got the breakthrough, dismissing Samuels before racing through the lower order. Two in two balls wrapped up the innings as West Indies were bowled out for 243. Not content with seven first innings wickets, Broad picked up another four in the second as England won by five wickets. A year later and Broad lit up Lord’s again with a destructive new-ball spell that saw the Black Caps collapse to 68 all out in the fourth innings, sealing a 170-run win for England. The Notts quick had helped put England in a strong position hitting a swift 26no in their second innings and soon found his groove with the new ball.

Peter Fulton snicked off to Broad third ball before he dismissed Hamish Rutherford and Ross Taylor in the space of three balls in his third over. When he had Kane Williamson caught at cover soon after, the Kiwis were 21-4 and Broad had all four. The dangerous Brendan McCullum was his next victim, trapped in front by an inswinger. Tim Southee and Bruce Martin followed but he was denied the chance of an eighth by a comical run out that confirmed an England win by 170 runs. 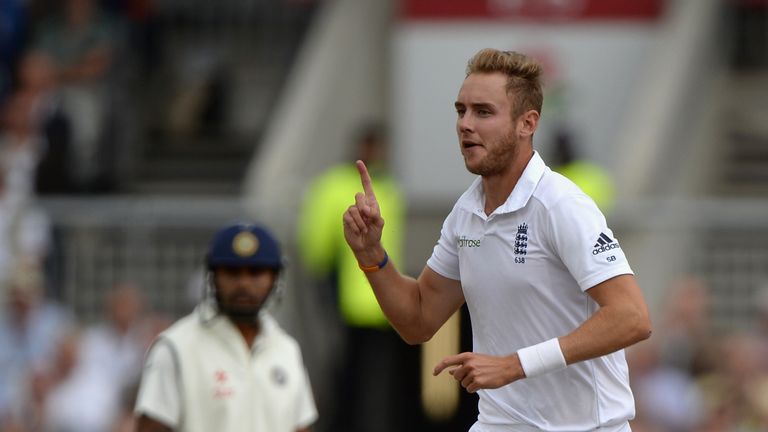 With the ball swinging nicely at Old Trafford, the partnership of Broad and James Anderson exposed the Indian top order in dramatic style. They picked up two wickets apiece with the new ball to leave MS Dhoni’s side floundering at 8-4.

Dhoni himself was the mainstay of the innings, scoring 71, but following the dismissals of Ravi Ashwin and Bhuvneshwar Kumar, the India skipper became Broad’s fifth victim. He castled Pankaj Singh three balls later as India succumbed for 152, Broad’s six-for setting the hosts on the road to an innings victory.

With Anderson ruled out, it fell to Broad to lead the England attack and he emphatically took to the role to secure career-best figures with a phenomenal display of swing bowling.

Chris Rogers fell to his second delivery, caught at first slip, before another beauty removed Steve Smith in the same over. Shaun Marsh and Adam Voges fell before the five-for was secured with the big wicket of Michael Clarke. When Nathan Lyon edged to slip Australia were all out for 60 and Broad had eight, setting England up for another innings victory.

Georgina Rodriguez says Cristiano Ronaldo made her ‘shake’ with nerves and won her over with ‘height, body and beauty’ – The Sun