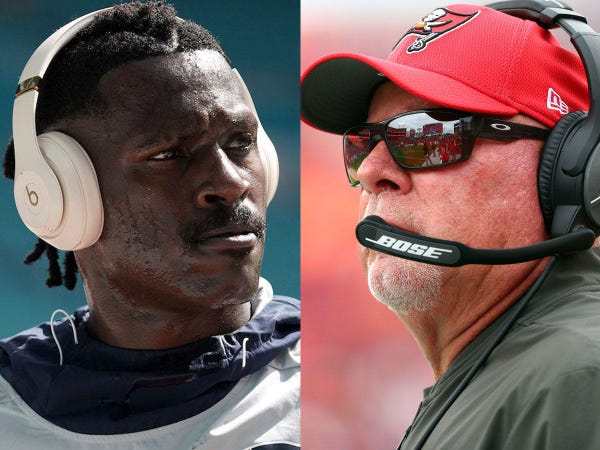 On October 14, Billie Jean King presented Tampa Bay Buccaneers head coach Bruce Arians with the Women's Sports Foundation's "2o2o Champion for Equality" award in honor of his efforts to promote "gender inclusivity in what is historically known to be a male-dominated sport."

Less than two weeks later, Arians' team signed one of the most controversial players in the NFL in Antonio Brown — a standout wide receiver with a troubling history of being accused of mistreatment and violence towards women.

Though his one-year deal with Tampa Bay was finalized on Tuesday, Brown is not eligible to suit up for the Bucs until their Week 9 game against the New Orleans Saints. Until then, the 32-year-old will remain on the sidelines as he finishes out an eight-game suspension from the league.

In late July, Roger Goodell and company handed down the punishment in response to Brown's various violations of the NFL's personal conduct policy. The former Pittsburgh Steelers star pleaded no contest to burglary and battery charges stemming from an incident back in January. He has also been accused of intimidating a woman via text message after making unwanted sexual advances.

Since last year, Brown has been accused of sexual assault by two different women, one of whom currently has a civil lawsuit pending against the seven-time Pro Bowler. His former personal trainer and Bible study partner, Britney Taylor, levied a rape allegation and two sexual assault claims against Brown in September 2019. Her suit is set to go to trial in December.

The wide receiver — who briefly played for the New England Patriots last season — has called Taylor's lawsuit a "money grab" in the past.

When asked by reporters about Brown's unsettled litigation after Tampa Bay's win Sunday, Arians told reporters that he and his team are prepared to "let the court system do its job."

"If it's found out to be true, he won't be with us," he added, per Greg Auman of The Athletic.

The Women's Sports Foundation, whose stated goal is "to enable girls and women to reach their potential in sport and life," says on its official website that recipients of its Champion for Equality award are individuals who have "shown an unwavering commitment to gender equality" and "strive for equality because it's the right thing to do." After announcing Arians as the 2020 honoree, the organization lauded the two-time AP NFL Coach of the Year for shaping the Buccaneers "into one of the most inclusive and diverse organizations in the NFL" and "ensuring that the next generation of girls grow up in a world in which they are welcomed in the traditionally male-dominated sport of football."

"This is a well-deserved honor for Coach Arians," said Tampa Bay co-owner Darcie Glazer Kassewitz. "Gender equality is a fundamental part of the Tampa Bay Buccaneers organizational culture and his consistent commitment to diversity makes our team stronger, both on and off the field."

Day 33 without sports?: Five overlooked moments that proved to change the course of sports history