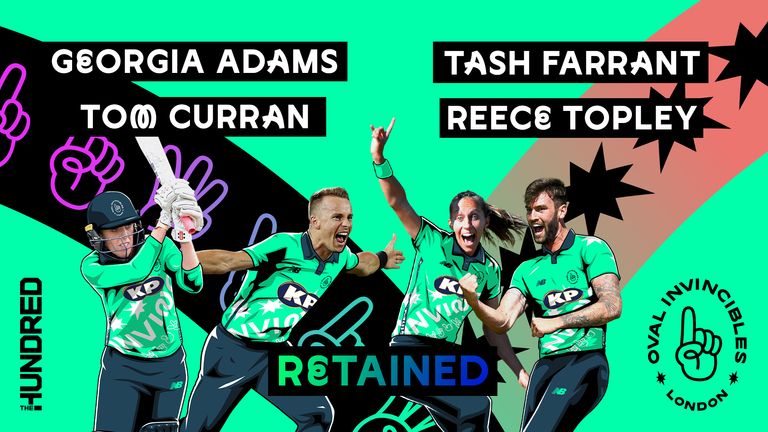 England all-rounder Tom Curran will line up alongside his brother Sam as part of the Oval Invincibles squad for The Hundred in 2021.

The Surrey siblings will play at their home ground of the Oval alongside left-armer Reece Topley, who signed for the county at the end of 2019.

“I think The Hundred is an incredibly exciting competition and I’m really looking forward to it,” said Tom Curran, part of England’s T20 and ODI squads for the upcoming white-ball series against South Africa after representing Rajasthan Royals in the Indian Premier League. “We are building a strong squad with a number of local players which I hope will help us be successful next summer.”

Topley – also out in South Africa – added: “It was a no brainer to stay at Oval Invincibles and I’m really pleased it has been confirmed. I’ve got some good memories of playing at the Oval already and I’m looking forward to creating some more in The Hundred next summer.”

Oval Invincibles have also confirmed that Georgia Adams and Tash Farrant, will be part of their women’s squad for the competition.

Adams starred for Southern Vipers in the Rachael Heyhoe Flint Trophy this summer, leading the side to the trophy with over 500 runs including an incredible 154no in what was a breakout tournament for the Sussex-based batter.

“I can’t wait for next year so we can finally get the long-awaited chance to compete in The Hundred,” she said. “It will definitely be the spectacle of the summer and I’m particularly looking forward to playing a format of cricket where I can express myself as a batter and play expansive cricket.”

Left-arm seamer Farrant is no stranger to the Oval and the South East of the country – the England international captained the South East Stars in the Rachael Heyhoe Flint Trophy and has been a key member of a very successful Kent side since 2012.

“The women’s game continues to grow despite the wider challenges the entire sport is facing and next summer can’t come soon enough,” she admitted.

Watch the first edition of The Hundred live on Sky Sports Cricket next summer.