This season, the Knicks started 5-5, and some fans are daring to hope that maybe this Knicks team is different. Maybe this one can break the playoff-less streak that began in 2013-14. The bad news is that the season is headed in the wrong direction. The Knicks have dropped three in a row to put them at 5-6, with multiple blowout defeats.

Coach Tom Thibodeau has this team playing hard, and the Knicks have beaten good opponents, including the Utah Jazz and Milwaukee Bucks. Entering the Charlotte Hornets game on Monday, the Knicks had the eighth best defense in the league. They are now down to 13th after losing to Charlotte, 109-88.

The Knicks haven’t fielded a top-10 defensive team since the 2011-12 season, when their fifth-ranked defense took them to the playoffs. The unfortunate flip side: This year’s team has one of the league’s worst offenses.

Something the Knicks have in their favor is that this season has produced lots of strange results, and not just for them. Night after night, in part because of the shortened season, no crowds, the pandemic and minimal time in training camp, lots of teams are losing big or to opponents who did not seem like threats. Some teams, like the Toronto Raptors (2-8), who are based in Florida because of the virus, are underperforming. Several top players, like Boston’s Jayson Tatum and the Nets’ Kevin Durant, have missed multiple games because they tested positive for, or were potentially exposed to, the coronavirus.

The shortened season helps the Knicks in another way. Banking wins early on gives them cushion against the losses that are almost unavoidable as the season grinds on. But it is still early, as Knicks fans learned in 2018.

Here is a look at what’s gone right and wrong for the Knicks so far.

The New and Improved Julius Randle

The biggest reason the Knicks have been competitive this year is Julius Randle, who has started off strong. Randle is averaging 22.1 points, 11.2 rebounds and 6.9 assists per game — all on pace to be career highs — on 49.4 percent shooting. He is averaging more assists this year than his last two years combined. If he keeps this up, Randle should deservedly make his first All-Star team.

He looks more comfortable on the floor, and Thibodeau has been adept at taking advantage of Randle’s versatility — for example, making sure he’s getting the ball on different parts of the court, rather than simply trying to bulldoze opponents in the post. Randle is skilled at creating for his teammates. The issue is that the Knicks don’t have many playmakers or shooters around him to ease his burden.

The Curious Case of RJ Barrett

RJ Barrett, 20, is playing a lot of minutes this year — 37.9 minutes per game, vs. 30.4 his rookie year. Barrett is, however, shooting a dismal 36.5 percent from the field and 18 percent from deep, both down from his rookie year, when he also struggled. 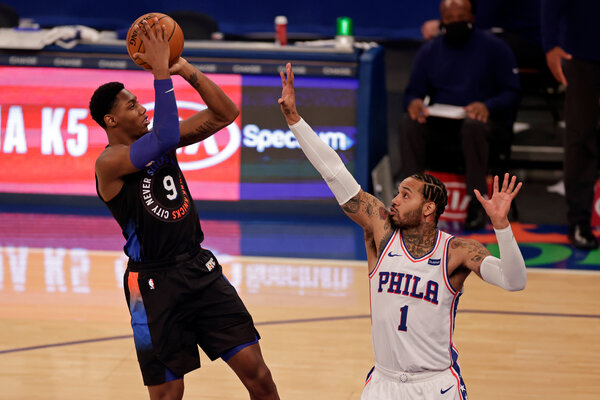 Watching the games, you can see Barrett’s improvement in other areas. He plays more aggressively, has developed into a strong rebounder (7.6 rebounds per game for a guard is impressive) and has improved his passing. He is a solid defender.

His inability to shoot puts more pressure on Randle. Barrett is making only 26.5 percent of his shots when there isn’t a defender within six feet of him. He’s also hitting only 17.4 percent when he catches the ball and shoots it.

But Barrett is still impactful for the Knicks, despite his scoring woes. His net rating (essentially a measure of how much better or worse a team is with a player on the floor) is minus 2.8. This isn’t ideal, but it is among the best on the team among those who receive serious minutes. When Barrett isn’t on the floor, the Knicks’ net rating is minus 13.8. That’s a bigger gap than the one for Randle, who is their best player.

It’s almost time for the Knicks to commit to an extension with Mitchell Robinson, who is now in his third year. It is difficult to gauge his true value. He’s a more traditional center who can’t spread the floor and mostly gets his points on dunks.

Through 11 games, Robinson’s production in several categories has decreased even as he has played more minutes (30.1) than usual, though the extra time seems to have given him room to grab more rebounds than before (8.1 per game). He is also below his per-game career averages in blocks (1.9) and field-goal percentage (68.2 percent; still very efficient).

The biggest improvement for Robinson is that he’s been able to stay on the floor. Before this year, he struggled with foul trouble, but now he doesn’t jump for up-fakes as often, making it harder for defenders to draw fouls. That was his biggest weakness. Now, not so much.

The Knicks don’t have many players who can break down defenses, which is what makes Elfrid Payton essential for Thibodeau. The Knicks cut him in the off-season and re-signed him to a cheap one-year deal. He is probably not a part of the Knicks’ future plans. But he has been a steady, veteran presence on the floor, which they have needed.

He is not much of a shooter, but he is skilled at getting into the paint. This year, he’s scoring above his career average with 14.5 points a game, and is tallying 4.3 rebounds and 4.5 assists per game.

Payton, 26, now in his seventh season, also does not make many mistakes on the floor. For the most part, he stays within himself and takes care of the ball. (His turnover percentage is an below-average 14 percent this season.) He’ll most likely never be a starter on a championship team, but he’s been a nice pickup for the Knicks.

NFL Odds, Tips and Free Bets including Buffalo Bills at 7/1 or New England Patriots at 14/1