Emma Raducanu has won her first set against Belinda Bencic at the U.S. Open.

The 18-year-old from Britain is playing Olympic gold medalist Bencic to start the second day of quarterfinal action.

Novak Djokovic faces Matteo Berrettini in a night match, hoping to move within two victories of a calendar-year Grand Slam.

Raducanu, who played her way into the tournament through the qualifying rounds, is trying to join 19-year-old Leylah Fernandez of Canada in the final four. 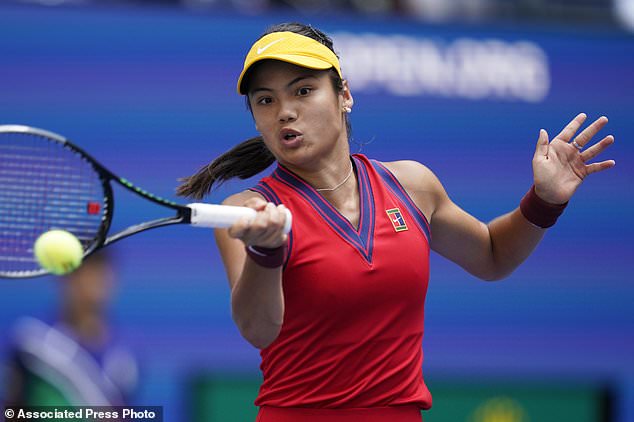 Emma Raducanu, of Britain, returns a shot against Shelby Rogers, of the United States, during the fourth round of the US Open tennis championships, Monday, Sept. 6, 2021, in New York

Ranked 150th, Raducanu can follow Billie Jean King in 1979 and Kim Clijsters in 2009 – who won the title – as the only women outside the top 100 of the rankings to reach the U.S. Open semifinals.

No. 4 seed Karolina Pliskova, the 2006 U.S. Open runner-up, plays No. 17 seed Maria Sakkari in the other women’s quarterfinal.

Djokovic beat Berrettini at Wimbledon for his 20th Grand Slam title, tying Roger Federer and Rafael Nadal for most among men.