On a sunny summer evening in 2012, eight runners elevated the 800 meters into high art. One set a world record. Several others were never the same. 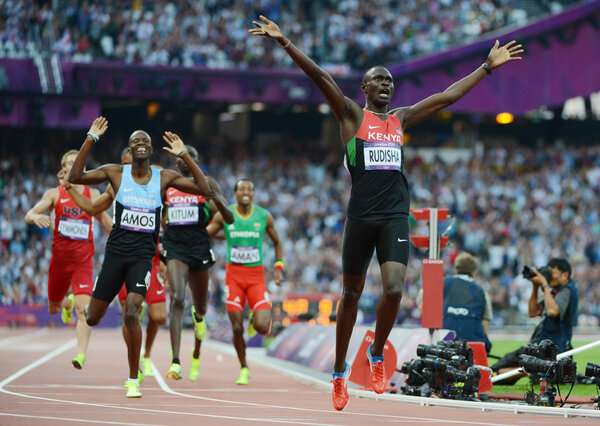 TOKYO — Whenever Nick Symmonds sees a replay of the race, it seems incomprehensible. He is captivated, of course, by David Rudisha, whose performance in the men’s 800-meter final at the 2012 London Games stands as one of the great spectacles in Olympic history.

But Symmonds is also drawn to one of the runners who trailed in Rudisha’s wake: Nick Symmonds.

“I remember standing there in shock after the race,” he said. “What just happened?”

Books have been written about the mile. Movies have been made about the marathon. Some of the flashiest figures in track have run the 100.

And then there is the 800, which might as well occupy a slice of real estate out by a strip mall, largely ignored if not forgotten. Runners have nightmares about the event, a neither-here-nor-there mix of distance and speed, an unforgiving calculus that typically yields more pain than fame.

But on a sun-splashed evening in August 2012, eight runners combined to elevate the 800 meters into high art. In winning Olympic gold for Kenya, Rudisha broke his own 2010 world record. Six of the men who finished behind him blazed to personal bests. Two set national records. And most would spend years struggling — and failing — to ever run that fast again.

“A lot of the guys weren’t the same after that race,” said Duane Solomon, the American who finished fourth that day.

Before the race, Rudisha had advertised that he wanted to do something extraordinary.

“We all knew we were going for silver and bronze,” Solomon said.

Symmonds was more skeptical that the world record was in play, but if anyone was capable, it was Rudisha. Even his preparation seemed to signal his unique gifts. As the other runners circled the warm-up track, Rudisha wore enormous headphones and plodded along so slowly that he could have been moving backward. “I think I lapped him two or three times,” Solomon said.

As the race approached, officials led the athletes from the warm-up track to the stadium — a walk that took them through a tunnel that, to Solomon, felt impossibly long. No one spoke; the silence was interrupted only by the occasional sound of runners slapping their thighs.

When the finalists entered the stadium, though, their solitude was demolished by a wave of noise.

“The crowd is right there,” Solomon said. “You’re just trying to keep it together.”

Symmonds had set the ambitious goal of breaking his personal best by nearly a second, with targets of 50.5 seconds for the first lap and 52.5 seconds for the second lap. His coach, Mark Rowland, thought it was a relatively conservative plan given the circumstances.

“We both said, ‘Everyone’s going to get caught up with Rudisha, and they’re all going to go out too fast,’” Symmonds said. “It was kind of crazy to even be talking this way, but he said, ‘If you hit those splits, you’ll be the Olympic silver medalist.’ We both really, truly believed that.”

Solomon said his legs felt alive as he approached the starting line, and that when the gun fired, a sense of calm washed over him. “I just zoned out and let my body do what it wanted to do,” he said.

Right from the start, Rudisha bolted to the front and immediately strung out the field.

Symmonds went through the first lap in 50.4 seconds, a shade faster than his desired pace — and good for last place, several meters behind Andrew Osagie of Britain as they finished the first loop of the two-lap race. Symmonds still thought the field would fade. Or at least that was the hope.

Solomon, meanwhile, was in fifth after a blistering first lap. At that point, he made the split-second decision to conserve some energy for the backstretch. “Let me just hold my position at least,” he recalled thinking.

With 200 meters to go, Rudisha was clear of the field and the crowd began to roar. Solomon had slipped to sixth and Symmonds had remained stuck in eighth, but they could tell the runners ahead of them were beginning to labor. “It gave me a second wind,” Solomon said.

Solomon passed Abubaker Kaki of Sudan coming out of the final turn before tracking down Mohammed Aman of Ethiopia. As the finish line came into focus, Solomon was closing on Timothy Kitum of Kenya for third when he ran out of room. After a late surge of his own, Symmonds finished fifth.

Rudisha, only 23 at the time, had crossed the finish line in 1 minute 40.91 seconds — the first and only man to break the 1:41 barrier. Nijel Amos of Botswana was second, in a time that tied him with Sebastian Coe as the third-fastest man in the history of the event.

Solomon put his hands on his knees and conferred with Britain’s Osagie as they studied the scoreboard. They were astonished. Osagie’s time would have won gold at the previous three Olympics. In London? He was last.

But one man had been better than everyone.

The 800 was so compelling that other athletes stopped competing to watch. Christian Taylor, the American triple jumper, was struggling in his final when his coach advised him to take a break: Rudisha was about to hit the track. “And it was two minutes of pure magic,” Taylor recalled.

Buoyed by a mental reset and feeling inspired, Taylor won the gold.

Inside the stadium, Solomon and Symmonds tried to reconcile running their personal bests with missing the podium.

The difference between third and fourth at the Olympics is often a fraction of a second. In Solomon’s case, it was 29 hundredths. The harsh reality of that tiny gap became clear to him when he was leaving London and going through airport security. Several Olympians in line with him had their medals. Solomon had received a certificate.

“You might as well have finished last,” he said.

Solomon waited until he returned home to watch a replay of the final on YouTube. He was mesmerized by Rudisha.

“He made it look so effortless,” Solomon said. “Even when he finished, it looked like he had more to give.”

Rudisha, 32, whose own career has been hampered by a series of injuries, last competed on the international stage in 2017. But he still casts a shadow on the event he once owned, and his performance in London continues to resonate.

Solomon said he cannot help but still feel some regret — regret rooted in the belief that he could have pushed himself sooner on the final lap, and that if he had done so he might have caught Kitum for the bronze. “I just waited a little too long,” Solomon said.

Symmonds went a couple of years before he found a video of the race. He would often dissect his old performances to learn from his mistakes, but he knew there was nothing he could have done different in London, he said. A former Division III runner, he had maximized his potential, all 5 feet 10 inches and 162 pounds of him.

That his performance had not been good enough for a medal was hard to accept, he said. After leaving London, he sought help from a sports psychologist.

“I’m not going to say I got over it instantly,” Symmonds said. “But I got to a point where I was OK with it.”

Neither Solomon nor Symmonds qualified for the 2016 Olympics in Rio de Janeiro, where the 800-meter final was made up of a new field of runners, with one exception: Rudisha, who repeated as the Olympic champion.

In Tokyo, only Amos is still chasing gold, and Rudisha’s world record. Amos, 27, has fond memories of London, where he won the silver and said his innocence was a blessing.

“I was just a young kid with nothing to lose,” he said. “I’m trying to find that little boy.”

Solomon retired last year and lives with his family outside Phoenix, where he is pursuing a career in law enforcement. He runs occasionally, he said, but has enjoyed hitting the weights more often. “It’s nice to bulk up after being skinny all my life,” he said.

Symmonds, who went on to win a silver medal at the 2013 world championships, stopped running for a living in 2017. He had launched a caffeinated gum company before retiring and is also a self-described content creator on YouTube, competing in various challenges. He recently attempted to consume spinach — and only spinach — for three straight days. (“I almost died.”) He makes more money from YouTube, he said, than he ever did as a runner.

Symmonds does not miss the travel or the grind of his former profession, he said — all those years of training boiled down into two loops of the track. But the special moments have stayed with him.

In London, with Rudisha out front for the world to see, there was beauty in the struggle.