Australia will lead off the Olympics on Wednesday morning when they face Japan in the opening match of the softball tournament – and the first event of the Games.

It might seem like a soft opening, but softball’s status in Japan is a far cry from the situation in Australia. 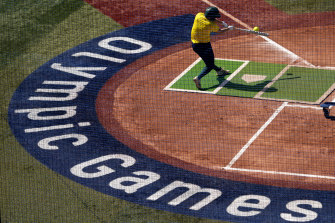 The Australians have been in Japan since the start of June.Credit:AP

When the first pitch is thrown in Fukushima at 10am (AEST), the 14,300-seat stadium will be empty of fans.

It won’t be unusual for much of the Australian team, given softball’s low profile in their home country. But for the Japanese, who hail from a domestic professional league that involves cheerleaders, bands and busloads of employees from corporate sponsors, it will be very different.

Dallas Escobedo, a pitcher for Mexico who has played in the league since last year, is of the same opinion. “Softball is the biggest thing out here. The fans, the competitiveness is unbelievable.” 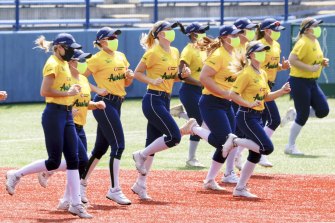 Veteran captain Stacey Porter is the only member of the Australian team to have played at an Olympics – softball has not been played at the Games since 2008. She is also one of a few Australians who will face the Japanese team with the benefit of having played in their league.

Ellen Roberts is another. “As part of my contract, I actually work for the company – an international transportation company – that sponsors the team. I work in the mornings, and then we practise from 1pm to 7pm, with optional practice after that,” she told japanball.com in May, describing it as “gruelling, but worth it”.

But Australia’s softballers are well acclimatised to Japan by now. They were the first foreign team to arrive, all the way back at the start of June, and they have even received support from local students.

Utility Chelsea Forkin told SEN that representing Australia at the Olympics was a dream come true and the team was feeling a wave of support from the other athletes beginning to arrive, as well as from home.

“We just can’t wait to get out there tomorrow … and just try and make everyone proud,” she said on Tuesday.

Japan are the reigning gold medallists, ranked No.2 in the world behind the US, and they will be formidable opponents.

“Their practice regimen has opened my eyes in the way they train for games,” Abbott, who has played in the Japanese league since 2010, said. “They train footspeed, they train agility, they train biometrics, their defensive speed and agility has been huge. Their overall athleticism on that side has been great to experience first-hand.”

Despite a lack of international competition recently due to the pandemic, Forkin said the Aussies had been doing their homework. As well as Japan, the Aussies will face the US, Canada, Mexico and Italy. The top two teams will play in a gold medal match while the teams in third and fourth will battle for bronze.

Australia have won silver or bronze on the four occasions the sport has been included at the Olympics, but never gold.

But there’s more on the line than just a medal.

Participation fell each time despite the medals, according to Pryles. But he said the pattern may be different this time because of a one-hour time difference with Tokyo, record spending on marketing and extra attention from being the first overseas squad to arrive.

Do FA Cup replays have extra time or are penalty shootouts played if it's level after 90 minutes?