Jason Kenny bid farewell to the Olympic men’s sprint title he has held since London 2012 as he was beaten in Thursday’s quarter-finals by Dutchman Harrie Lavreysen at the Izu velodrome.

Kenny needed a repechage to get beyond the 1/8 finals after being beaten by Denis Dmitriev, but his win over Azizulhasni Awang and Yuto Wakimoto proved only a temporary reprieve.

Lavreysen, who qualified joint fastest with compatriot Jeffrey Hoogland in an Olympic record time of 9.215 seconds on Wednesday, comfortably dispatched him in the best-of-three quarter-finals.

A day earlier Kenny, now Britain’s most decorated Olympian having added a second silver to his six golds, admitted he was struggling to recover from the exertions of the team sprint competition, instead calling Jack Carlin Britain’s best chance of a medal in this event.

The Scot duly advanced to Friday’s semi-finals, beating Germany Maximilian Levy 2-0, but Kenny was left to the placement race and came in last to finish eighth.

“I was just taking it one ride at a time but once I (lost) against Dmitriev it was hard, the repechage was absolutely savage and then I was straight back up against the fastest guys in the field,” Kenny said.

“It was always going to be tough from then on. It’s one of those things. It’s just where I am physically at the minute.

“I don’t expect to be the fastest in the world every time. It’s really hard to win at the end of the day. It was really hard five years and it will be really hard tomorrow for whoever takes it.”

Carlin looked in impressive form, diving underneath Levy in their first race to power to victory.

“With Jan Van Eijden as my tactics coach… if you ever watch some of the races he used to do, he would say it was kamikaze-esque,” the 24-year-old said. “He tells me if you ever see an opportunity, take it. You just have to go with your gut.”

Asked about being tipped by Kenny, Carlin thanked his team-mate – though he could not resist a crack about the 33-year-old.

“Jason has been a mentor as well and a friend,” he said. “He’s been here before many times. I think it’s his 15th Olympics now, isn’t it? He knows what he’s talking about. And it’s nice to hear those kind words from him.”

Katy Marchant’s hopes in the women’s keirin were ended in cruel fashion as she was caught in a crash through no fault of her own in the quarter-finals. 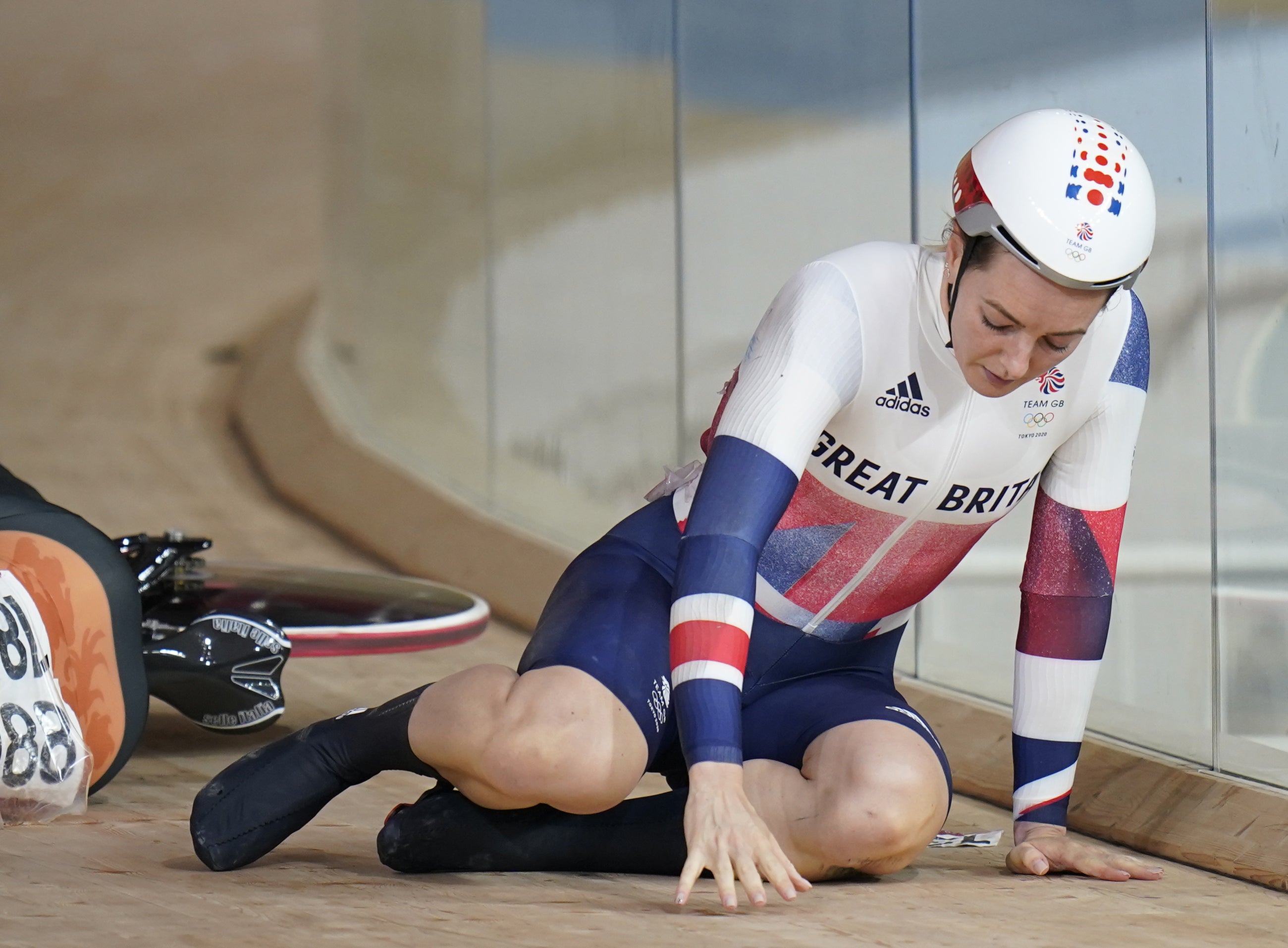 Marchant, who looked strong in Wednesday’s opening races despite suffering one relegation, was taken out when Dutch rider Lauren Van Riessen appeared to clip a wheel in front and swung up the bank and into her side.

Marchant got back on her bike to finish but already knew she could not advance, with only the top four going through and no second chances at this stage of the competition.

“My legs felt good, I felt I was coming at the right time,” she said. “But I was in the wrong place at the wrong time I guess. That’s bike racing.”

The 28-year-old must now refocus ahead of the individual sprint, in which she took bronze in Rio five years ago, with competition to start on Friday.

“There’s a bit of blood but I think I’m alright,” she said.

The same could not be said for Van Riessen, who was carried from the track on a stretcher and taken to hospital.

“She is well, but can’t remember the fall,” a spokesperson for the Dutch team said. “However, she was able to make it clear that the pain mainly concerns her shoulder. The team doctor is with her.”