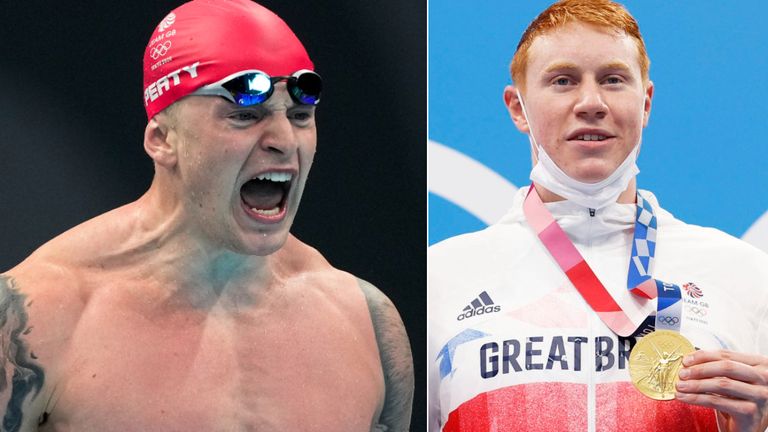 Eight medals, including four golds, in Tokyo. It has been a dazzling Olympics for Team GB in the pool. A far cry from the funding cuts and lacklustre returns from London 2012.

Siobhan Marie-O’Connor has seen up-close the development of these new pool warriors, having made her Olympic debut in London nine years ago, before winning silver at the 2016 Rio Games.

Siobhan, who retired in June aged 25 because of struggles with ulcerative colitis, has been a regular pundit on Sky Sports News screens during the Tokyo Games.

“Inspire a generation”. The London 2012 legacy lives on and has delivered on its promise. Many of the Team GB heroes who have produced the magic in Tokyo were the young kids who stood in the stands watching a home Olympic Games in 2012.

It has been Great Britain’s best medal tally at an Olympics with four gold, three silver and one bronze. Duncan Scott became the first British athlete from any sport to win four medals at a single Games (one gold and three silvers). 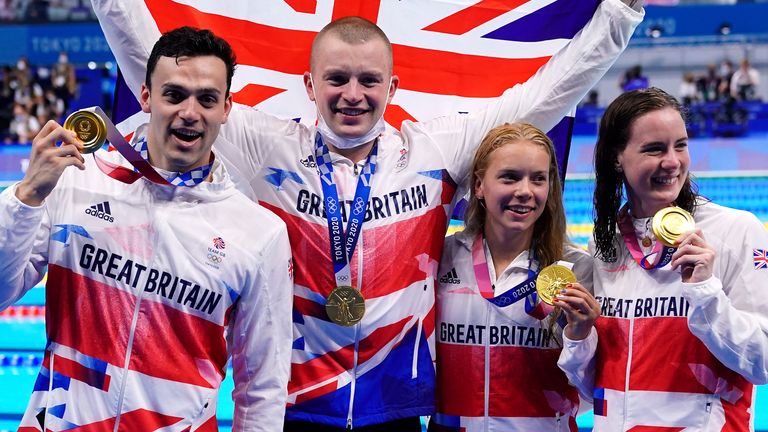 World record holder Adam Peaty became the first British swimmer to defend an Olympic title in the 100m breaststroke and was also part of the mixed medley relay team which set a new world record in winning gold in its inaugural event in Tokyo.

After the stunning world record performance on Saturday, Peaty said: “If you’re watching now, and you’re a kid, I was the same kid in 2012. Just believe, follow your dreams and you can do what we do – and hopefully we’ll see you on the team in eight years.”

Adam was not the only swimmer to be motivated by witnessing a home Olympics. In the early hours of Tuesday, 21-year-old Tom Dean became Olympic champion in the 200m freestyle, setting a new British record in the process.

Duncan Scott finished just 0.04 seconds behind him to secure the first 1-2 finish for Britain in the pool in over a century.

Tom was only 12 when he stood alongside his older sister Connie in the stands of the Aquatic Centre to watch the London 2012 Olympic trials in Stratford.

Inspired by what he had seen down the road, Tom threw himself into the sport and found he had an exceptional talent.

After making his first Olympic team in April 2021, Tom posted a picture of himself alongside Connie from that day and said: “Nine years after watching the 2012 trials when I first started swimming, I never thought I’d be racing here.”

After his gold in Tokyo, Tom was interviewed by London 2012 Olympic champion Greg Rutherford. Greg took to Instagram to reveal how Tom had called him back for a quick chat to say: “In London 2012 he loved my win and wanted to replicate it.”

Greg added: “He made me cry and we cried together. When you are an athlete you always hope that you’re having a positive impact on other athletes, but you are rarely told. For Tom to take the time to chat even though he’d just achieved the pinnacle of sport shows how special a human he is.” 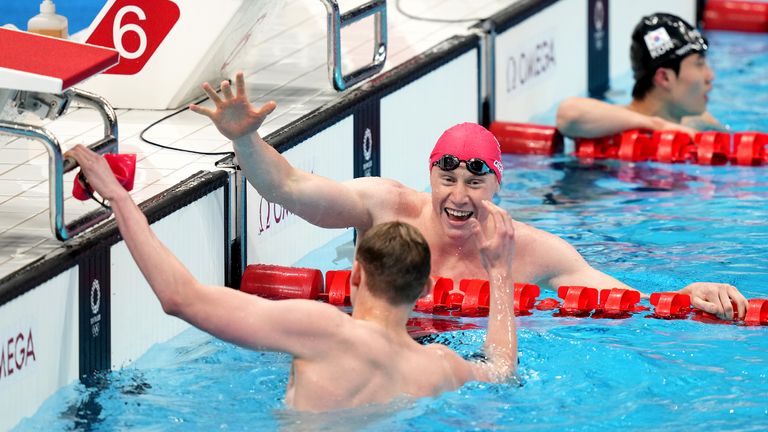 Tom spent the first six years of his career at a small club in his home town of Maidenhead before transferring to Bath National Centre in 2018 – one of the centres of excellence for swimming set up to produce results in London 2012.

It is here he was trained by Britain’s most decorated Olympic swimming coach David McNulty. David took Tom under his wing and nurtured his raw, incredible ability all the way to the top of the Olympic podium.

Both Tom and Adam’s journeys are examples of many very similar journeys. Much of the success we enjoyed at the Olympic Games in Rio, and even more so now in Tokyo, is attributed to athletes who were inspired as kids and young teenagers.

It was not just the inspiration and fire in the belly that was provided to the likes of Tom and Adam nine years ago. They were also given the means to turn those dreams into reality.

David McNulty. The greatest British coach of all time. He has produced 6 Olympic medalists over the past 4 Olympic Games. All in completely different events🇬🇧
🥉- 2008 Jo Jackson
🥈-2012 Michael Jamieson
🥈🥈/🥈/🥈- 2016 Jazz Carlin, Chris Walker Hebborn, Myself
🥇- 2020 DEANO

Due to the surge in grassroots funding ahead of London 2012, these young hopefuls were given the opportunity to train and nurture their talent in brand new world-class facilities and training programs set up across all sports, such as the national centres in swimming.

I was incredibly lucky to represent Team GB in London 2012 when I was just 16.

Had I not been able to train at the National Centre in Bath when my home training program folded because of cuts during the credit crunch at the age of 14, I would not have made the home Olympic team, and I don’t believe I would have gone on to win an Olympic medal in Rio four years later.

I competed in London, but I felt like a spectator with tickets to the best sporting event in the world. The passion in which that experience ignited in me was fierce. I vividly remember sitting in the stands watching the swimming finals and making a promise to myself that one day I would stand on the podium.

London 2012 has inspired a generation of athletes and given them the platform and tools to perform.

I am sure that there will be many kids sat at home watching the action in Tokyo who watch their heroes in awe, but in 10 years’ time, it could be them.

Bucs' Leonard Fournette hopes Antonio Brown returns: 'Guys like that, you need around'