Just as middle-distance running was threatening to get stale, a revival of sorts had been slowly bubbling away since Rio 2016. On Tuesday evening in Tokyo, a new era began with a flash as two 19-year-olds burned the rest of their 800m field to steam away with Olympic gold and silver.

Athing Mu only turned 19 in June. Last year, she was still attending high school in Trenton, New Jersey. And now, with the most commanding of 800m runs, she is an Olympic gold medalist. Keely Hodgkinson completed the teenage one-two, nabbing Great Britain’s first athletics medal with a bold dart across the last 100m.

It meant as much of the daylight between her and Mu was also between her and third place, which was eventually taken by Raevyn Rogers, also of the United States. The distance between them will only go shorter and increase for the rest.

For Mu, this was the big-stage announcement that had been predicted for her ever since America were told to watch out for a 15-year-old tearing up state and national competitions. She coasted her semi-final with a time of 1:58:07 that could have been quicker if she didn’t decide to save some gas for tonight. Her 1:55:21 to seal this race is a new American record – fitting given she is the first American woman to win the 800m since the 1968 Games in Mexico City.

Conversely, not many would have pegged Hodgkinson as the one to break Team GB’s duck, certainly not a year ago when she was a relative unknown. But at the start of 2021, she went 1:59.03 at a meet in Vienna – the fastest for an under-20 at the time – then won the British Athletics Championships at the end of June to seal her place in Tokyo. Now, not only is she an Olympic silver medalist but, with 1:55.88, holder of a new British record.

“There’s not just one 19-year-old in the race – there’s two!” beamed Hodgkinson, still giddy in spikes adorned with scribbles of well-wishes from those at home. “Hopefully it stands for a good competitive 10, 15 years ahead.”

Mu agreed. “Maybe a little rivalry after Keely ran the U20 indoor record, I was like: ‘Hmm, I need that!’” And she got it, bettering Hodgkinson’s Vienna run with 1:58.40 at a February meet in Arkansas. 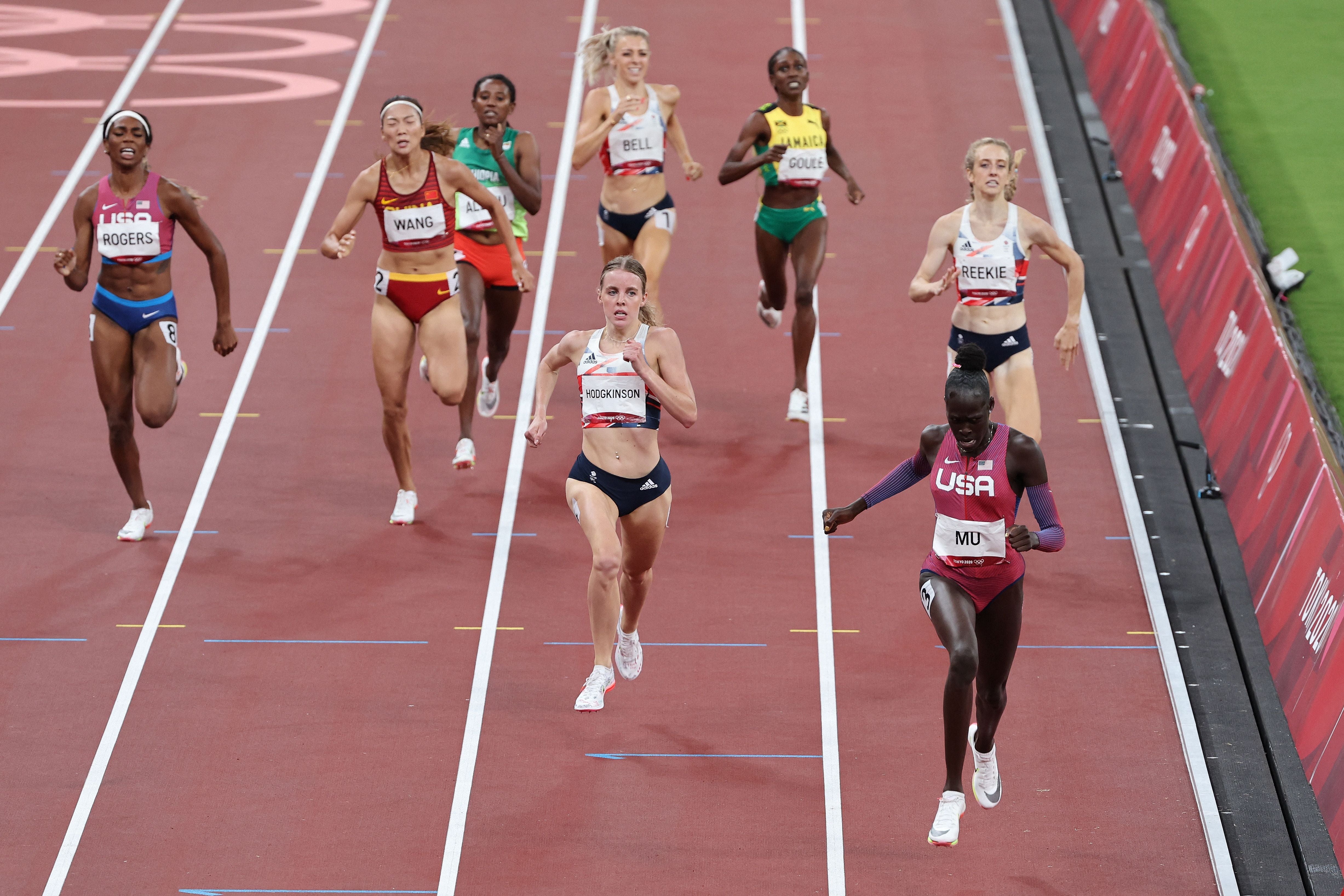 “Yeah, you took my record!” interjected Hodgkinson, pointing at Mu like she wanted it hand it back then and there. “I think we’re going to push each other,” continued Mu.

Perhaps it is not surprising both are looking into their mid-thirties. The path to the podium has been as swift as their final laps. Hodgkinson, as it happens, was the swifter of the two with 57.4 that set her apart from the remaining six and toppled Kelly Holmes’ record of 1:56.21.

Holmes sent GB’s trio messages of support over the last few days, and the glee with which they were received spoke of how she has inspired through the generations. So it was no surprise when Hodgkinson answered how she did when asked to pick which felt better – the silver or beating Holmes’ record.

“Definitely Kelly Holmes’ record,” she replied in a flash. “Kelly is a massive legend of the sport, and she always will be with that double Olympic gold. She seems like such a lovely girl.

“She sent us all a few messages the past couple of days and has been so supportive. I’m quite in shock about that time, but I couldn’t be happier really. I really executed that well.”

Holmes’ standard had remained untouched since it was posted in 1995. The closest before tonight had come at a Diamond League meet in Monaco last month, where Laura Muir came within 0.52 seconds of it. Muir’s decision to only race in the 1500 meant Jemma Reekie, who came third in that same race with 1:56.96, was seen as the most likely medal hope. Rogers burst late within the final 20m as Reekie faded into fourth. 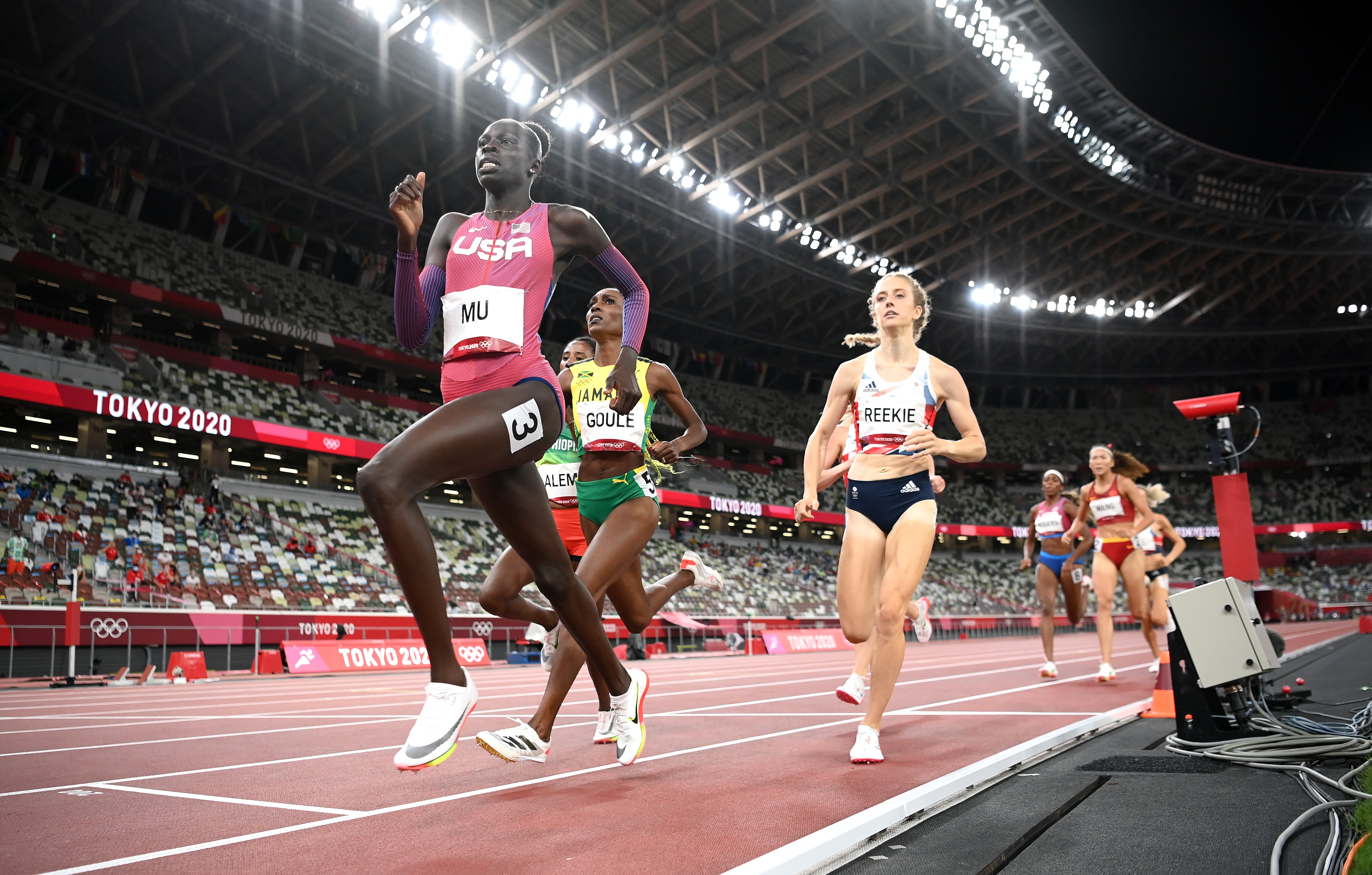 Over the last two-and-a-bit decades, Holmes’ record went from a beacon to strive towards into an unflattering light that illuminated the paucity of female middle-distance runners in the United Kingdom. So to have three out of the eight contenders in this race wearing Team GB stash – Alexandra Bell finished seventh with a new PB of 1:57.66 – felt like an important shift. One that is a word to young runners of all distances that your moment can be right now.

This will momentarily lift the gloom around GB’s track athletes. The misery of losing Dina Asher-Smith from 100m and 200m contention to a hamstring injury was compounded on Tuesday morning by an aborted 200m run from Adam Gemili because of a similar problem. Gemili revealed he had actually torn his hamstring on his last run before entering the calling room. Asher Smith’s injury is not as serious – she pulled herself out of the 200 to preserve herself for the women’s 4x100m relay.

As it happens, Hodgkinson is not privy to any UK Athletics funding. That will surely change, along with aspects of her life she would never have previously had to consider, such as fame and the demand on her time over the next couple of years. She is, unequivocally, ready for it.

“This is what I want to do,” she said, with confidence. “I want to be the best one of the world, and I’m going to do everything I can to be that.”

It is one of the truisms of the track that every distance has its golden period. Usually, it takes time to build a stable of grizzled runners, established runners to instigate, years of earning their stripes and trading their successes. But on Tuesday, Mu and Hodgkinson decided between themselves that their time was now.

Remembering Henry Cooper, a small giant with an icon’s legacy