HARRY KANE kept up the chase for the Prem’s Golden Boot – by giving the Old Gold the boot.

The Tottenham striker’s first-half opener upped his top-flight goals tally for the season to 22. 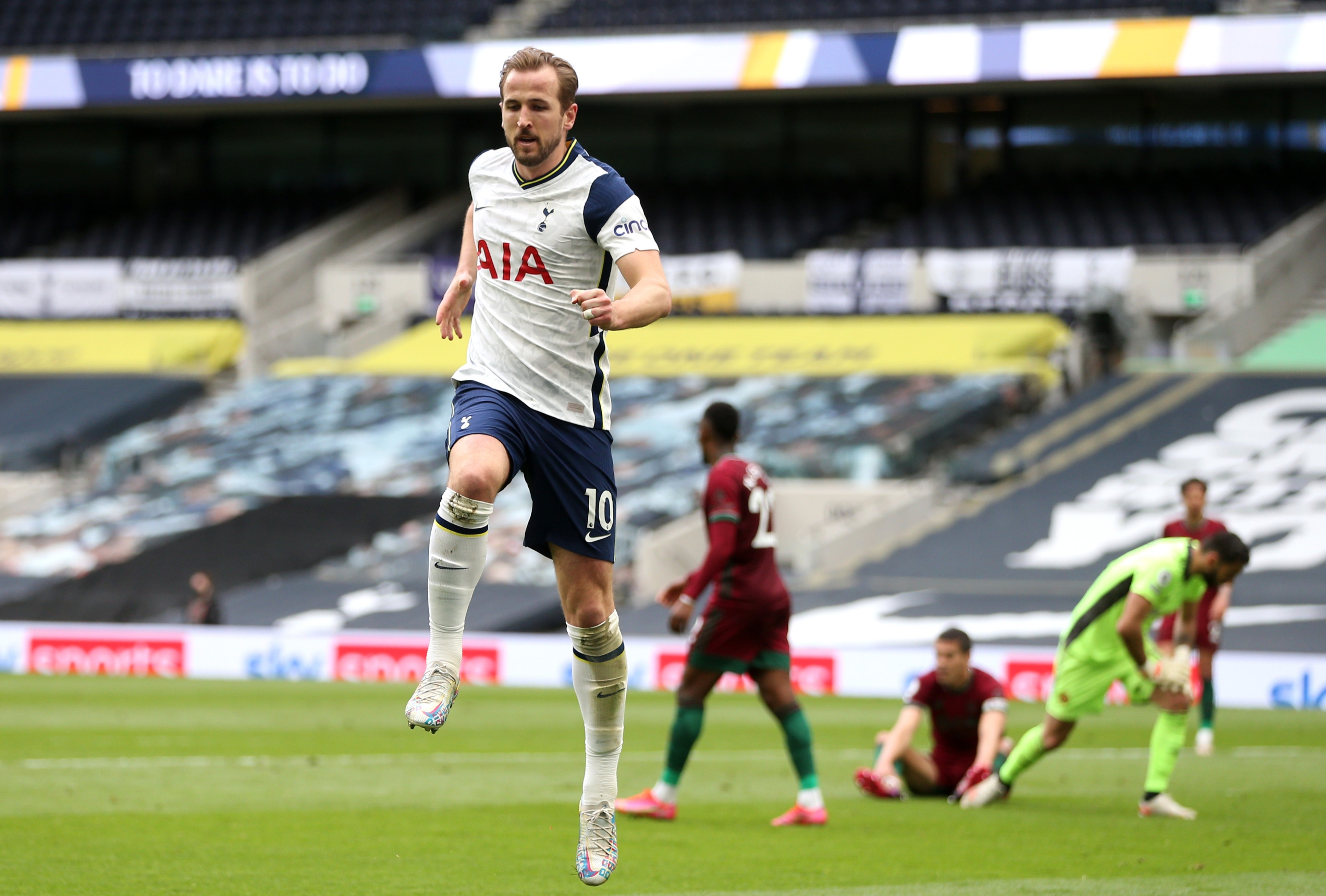 Pierre-Emile Hojbjerg added the second after the break as Spurs leapfrogged West Ham to go sixth in the table on goal difference.

Barring a goals avalanche from the Hammers or Everton, this victory over a Wolves side – playing in their maroon away strip instead of their famous Old Gold home one – puts Europa League qualification in Tottenham’s own hands.

The North Londoners will be hoping if they do make it, their superstar frontman will still be with them.

Kane, who has made no secret of his desire to win trophies, said he will make a decision on his future after the Euros.

Southgate also would have been impressed by Dele Alli’s rejuvenation under interim Spurs boss Ryan Mason – even if the midfielder has left it too late to bag a seat on the plane this summer.

Given the ominous direction the campaign was heading a couple of months ago, that would represent a degree of success in N17.

However, the reality is it should have always been a formality. The bare minimum.

Stand-in-gaffer Mason, with three Premier League wins out of four, can take pride in he has at least not made their woes worse. In fact, as well as results, he has clearly improved morale.

A 500-strong fans’ protest against chairman Daniel Levy and his running of the club in the wake of European Super League scandal and another trophyless season, which took place outside the stadium on Saturday, was followed by another considerably smaller one here.

It may have not been on the same level of what we have seen at Old Trafford – even though the strength of feeling among the protestors is exactly the same.

But you can expect the scale and possibly the venom to increase when 10,000 Spurs fans return inside the stadium for their final home clash of the season against Aston Villa on Wednesday.

There could be no complaints from them about this result, even if at times their team’s display was decidedly low-key.

Kane signalled his intent by firing a 20-yard shot against a post in the fifth minute. 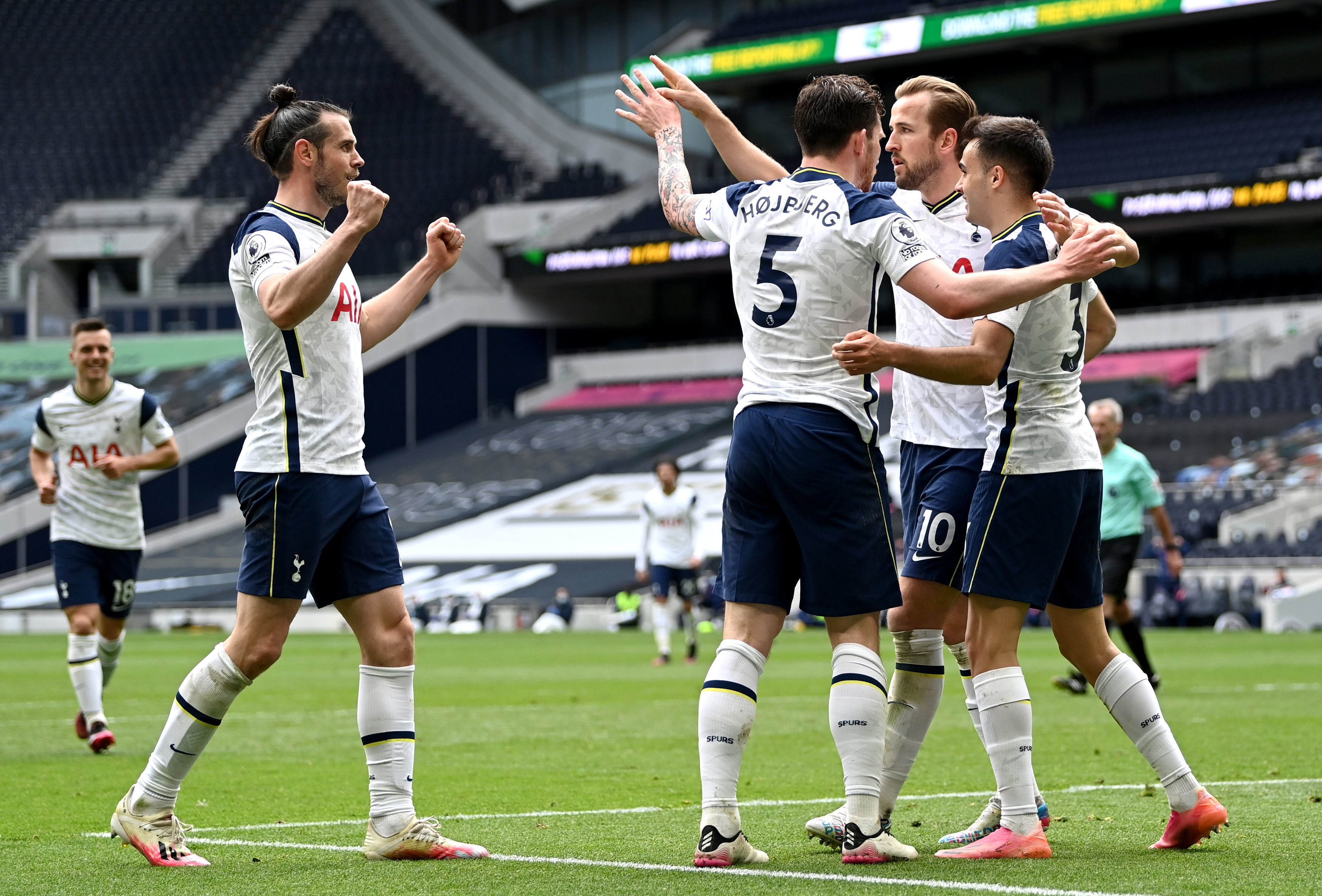 Wolves forward Fabio Silva then had one shot from a tight angle saved by Hugo Lloris and another deflected wide for a corner as the visitors hit back.

But Spurs always appeared in charge as Gareth Bale had a free kick well held down low by Wanderers keeper Rui Patricio, who later saved a Son Heung-min shot at the second attempt.

In-between, Silva wasted a great counter from Adama Traore by dragging his shot wide, much to the frustration of his manager Nuno Espirito Santo.

The Wolves boss has been one of the many names linked with the Spurs vacancy.

But if this was an audition, it did not go well as moments after having a header cleared off the line by Conor Coady, Kane held off his England pal as he rounded Patricio to break the deadlock on the stroke of half-time.

Romain Saiss should have equalised in the 50th minute but unmarked in the six-yard box he inexplicably placed his header wide.

Sergio Reguilon had a drive tipped over the bar and Kane hit a post again, with Dele sweeping the rebound against the upright.

It was left to Danish midfielder Hojbjerg to make it 2-0 in the 62nd minute when he slammed home the loose ball after Patricio had done well to parry Bale’s powerful first-time shot from Reguilon’s excellent run and cross.

Silva and Traore wasted good chances to make it a nervy finish for Spurs, who must now guard against a trademark collapse in their final two matches.

Deshaun Watson takes step in breaking up with Texans