AUGUSTA, Ga. — The first Augusta National Women’s Amateur in 2019 featured a closing charge by the eventual winner, Jennifer Kupcho, who faced down the intimidating back nine by playing her final six holes in five under par.

While the tournament was canceled last year because of the coronavirus pandemic, this year’s edition proved, like so many of the Masters tournaments, that Augusta National is often the setting for drama and unpredictable outcomes.

For most of Saturday’s final round, it appeared that Rose Zhang, a 17-year-old Californian, was going to claim a narrow victory in the 54-hole event with her steady, poised play. Zhang, who began the day tied for the lead after the first two rounds at the nearby Champions Retreat Golf Club, suddenly stumbled on Saturday with a triple bogey on the treacherous 13th hole. But Zhang then rallied to become one of six golfers tied for the lead with only a handful of holes left to play.

For the next hour, the players jockeyed for the lead on the famed Augusta National layout in familiar, if fickle, ways — stunning recoveries under pressure, deft short-game play, steely-eyed putts and the occasional flub.

In a surprise ending, after a one-hole playoff, it was a different 17-year-old, Tsubasa Kajitani of Japan, who came from behind to win the tournament. No Asian player has won the Masters, which was first contested in 1934. Asked how it felt to be the first player from Japan to win a tournament at Augusta National, Kajitani, who came off the final green with tears running down her cheeks, said through an interpreter that it was “a dream come true.”

After 18 holes on Saturday, Kajitani and Emilia Migliaccio, a senior and an all-American golfer at Wake Forest University, were tied at one over par, one stroke ahead of six players from five countries who tied at two over.

Both players hit their tee shots into the 18th fairway to start the playoff, but each was slightly out of position after wayward approach shots. Migliaccio had an exceedingly difficult chip over a bunker to a green sloping away from her, and Kajitani had to putt down the same unnerving slope from 45 feet away. Kajitani’s task proved less daunting, although she had to sink a 5-foot par putt to clinch her victory.

Kajitani, who is from Okayama, Japan, did not play in the inaugural women’s amateur event in 2019 at Augusta National, although she won the Japan Junior Championship that year. She was second at the 2019 Australian Women’s Amateur and played in three other events on the LPGA of Japan Tour.

“I have played in many other tournaments,” Kajitani said. “But you can’t really compare those to this tournament.”

Migliaccio played Saturday with her mother, Ulrika, who was a top collegiate golfer at the University of Arizona, acting as her caddie, making the duo the first mother-daughter pair to compete at Augusta National. That partnership made the closing round especially memorable for Migliaccio, who has decided not to pursue a professional golf career.

“It was so fun; it was so special,” Migliaccio said Saturday evening. “That’s all I wanted to do. I really wanted to enjoy this moment with my mom, and this is probably one of the last times she’s going to caddie for me, and it was just a joy to be out there.”

She added: “I’m not going to turn professional and I’m really happy with my decision. Golf has taken me so far. It’s allowed me to played Augusta National, which I wouldn’t have dreamed of when I started playing.” 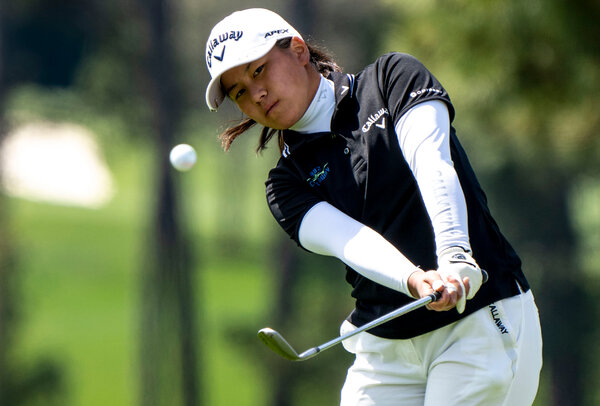 After starting Saturday’s round two strokes off the lead, Kajitani appeared to have botched her chance at winning when she needed four strokes from the front of the 17th green to get her ball in the hole for a double bogey. Kajitani conceded that she had hit two nervous shots at the 17th hole, but she then turned her focus to the closing hole.

Kajitani, who hit 79 percent of her tee shots in the fairway during the tournament, found a bunker on the left side of the fairway on the 18th hole. An attempt to hit a challenging uphill shot to the green came up considerably short. But her pitch from about 50 yards nearly spun back into the hole for birdie. A sturdy par was enough get her into the playoff with Migliaccio.

Zhang, who began the final round tied with Ingrid Lindblad of Sweden, was comfortably in the lead at one under until a series of mishaps at the 13th hole, where she had to take two penalty strokes for errant shots. The trouble began when Zhang hooked her tee shot toward the hazard on the left side of the hole. When the ball was not found, Zhang had to hit a second shot from the 13th tee. Her fourth shot on the hole ended up in the water hazard protecting the green. After chipping onto the green, she two-putted for a triple bogey.

Zhang recovered with a birdie on the 14th hole to rejoin the gaggle in the lead, although a bogey at the 17th ultimately left her one stroke behind Kajitani and Migliaccio. Still, she was pleased.

“To handle the pressure of just being on television and playing at Augusta National, I think says a lot,” Zhang said.