DONGGUAN, China — When it comes to basketball’s World Cup, this is how it works back home for American players: Only in defeat are you remembered.

In a tournament of such modest standing in our hoops culture, compared to the Olympics, typically only by losing does the United States men’s national basketball team command the attention of the mainstream sports public.

The 12 players who agreed to represent the United States at the 2019 FIBA World Cup knew the deal, deep down, when they signed up to join a roster that had been shunned by some 40 top pros — including all the biggest American stars. Yet those volunteers discovered the true depths of their no-win situation on Wednesday night, when the United States was outclassed early and late in an 89-79 quarterfinal loss to France at the Dongguan Basketball Center.

Had they managed to hold their 7-point lead over France in the fourth quarter and find a way through the next two rounds against Argentina and the Spain/Australia winner, this group likely would have been celebrated — and then quickly forgotten when more established players returned to the program next summer for the 2020 Olympics in Tokyo.

Instead? Rather than fly overnight to Beijing for Friday’s semifinals as planned, U.S.A. Basketball’s entire humbled traveling party was forced to return to its hotel in Dongguan to rest up and brace for Thursday’s night’s game against Serbia in the fifth-place bracket — as well as the unkind commentary that is sure to come after Rudy Gobert and the French guards, Evan Fournier and Nando De Colo, halted the Americans’ 58-game winning streak in tournament play. 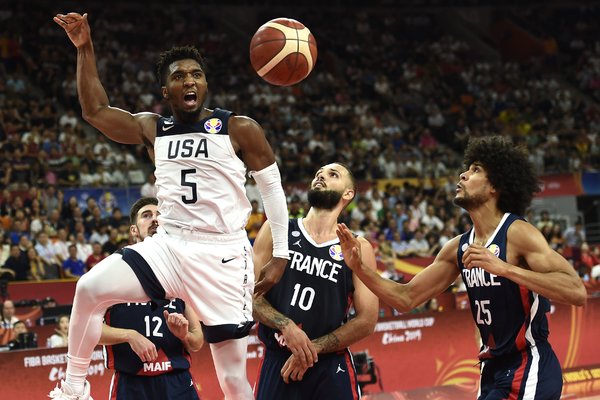 “It’s all sort of sinking in right now,” the Nets’ Joe Harris said. “They outplayed us from the get-go, really. We were reacting the whole night.

“You put in a lot of a time, a lot of work, you build up a special bond with these guys and the coaches. And then for it not to come to fruition at the end of it all, it’s a tough pill to swallow.”

Said Boston Celtics forward Jaylen Brown: “Everybody knows what we wanted to do. And we didn’t do it. I guess you can imagine how we feel, right?”

One locker-room observer suggested afterward that, in his time in the league, he had never seen such a despondent scene after a loss. Harris, unprompted, made multiple mentions of the “39 days” that this group spent together trying to establish sufficient continuity to get through eight games and make their summer more of a non-story.

Falling short of the medal round completely, of course, means Gregg Popovich’s debut as national team head coach didn’t go any better than his stints as an assistant in 2002 and 2004, when the United States finished sixth at the world championship in Indianapolis and third in the Olympics. In six major competitions in between those lows, Duke’s Mike Krzyzewski coached the United States to five golds — three in the Olympics and two in the World Cup.

Krzyzewski, mind you, always had far stronger rosters than this one and only managed a three-point win over France at the 2016 Olympics in Brazil with a team headlined by Kevin Durant, Kyrie Irving and Paul George.

Popovich, who has been head coach of the San Antonio Spurs since 1996, will have to answer questions about why he brought three centers to China if Myles Turner, Brook Lopez and Mason Plumlee could only merit 16 minutes combined against Gobert. Or why he decided to cancel almost every practice on off days for a group that has been so slow to mesh. But there’s a reason Popovich has come across as wound tightly from the moment this potluck squad convened in Las Vegas on Aug 4.

He knew this could happen.

Even before an exhibition loss to Australia last month and a near-loss to Turkey in first-round pool play, Popovich knew that the unreliability of his power players, his lack of depth and a backcourt pairing of Kemba Walker and Donovan Mitchell, who clashed stylistically, could be problems.

Mitchell rumbled for an authoritative 29 points through three quarters to help nudge the United States into the lead after it had fallen behind by double digits early in the second half. But France reeled off 22 of the game’s final 29 points, capitalizing on six missed free throws by the Americans in the fourth quarter and an off-key Walker (10 points on 2-of-9 shooting) dominating the ball in crunchtime instead of Mitchell.

Popovich spent much of his postgame news conference trying to play defense, calling it a “disrespectful notion” when a reporter asked Mitchell a question about the impact of all the no-shows.

“France beat us — doesn’t matter who is on the team,” Popovich said. “There’s no such thing as ‘other guys.’ ”

Nor did the French see any reason to apologize for taking advantage of the United States’ rare vulnerability. When Walker committed a backcourt violation late, Orlando’s Fournier (22 points) and Charlotte’s Nicolas Batum, playing for France, celebrated with fist-pumping and arm-raising as if the Americans had their A-team on the floor. 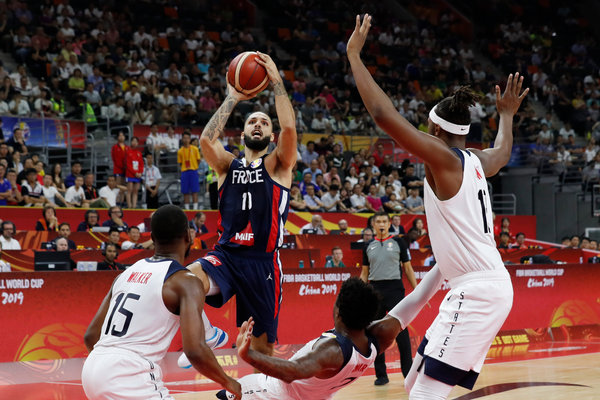 De Colo’s 18 points prompted Harris to call him “an N.B.A. player who happens to be playing in Europe.” Even the Knicks’ much-maligned Frank Ntilikina played a key role to boost the backcourt production in support of Gobert, who attacked the rim as relentlessly as he defended it in racking up 21 points and 16 rebounds.

“I don’t think I realize it yet,” Gobert told me after his own news conference, still sitting at the podium after fielding questions about the upset.

“And I don’t want to realize it until the competition is over.”

You understood exactly what Gobert meant. As he said in multiple interviews afterward, France’s first victory over the United States in 10 tries won’t “mean the same” to him unless France can win the whole tournament.

Yet you struggled to imagine how the ever-patriotic Popovich, on the other side, can get much of this disappointment out of his system in a mere three weeks before his Spurs open training camp.

The Americans have to play two more games here in the fifth-through-eighth-place bracket, starting with Thursday night against Serbia — a duel that so many had pegged as a likely matchup for the championship game.

“Everyone knew what was at stake,” said the Sacramento Kings’ Harrison Barnes, the lone member of the gold-medal-winning team in Rio also in China. “You have to take ownership of it.” 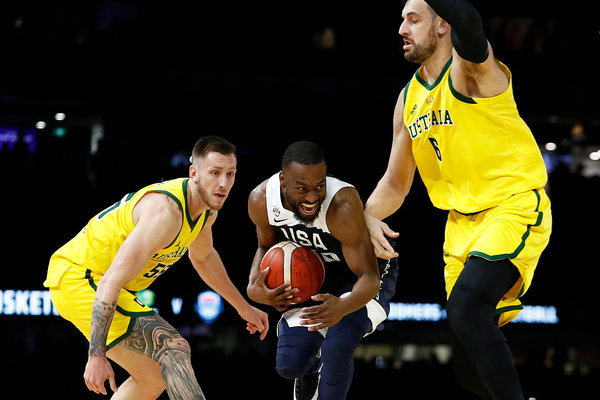 Marc Stein is a sports reporter specializing in N.B.A. coverage, with occasional forays into soccer and tennis. He spent nearly 15 years at ESPN before coming to The Times. @TheSteinLine • Facebook

Lakers feel they ‘got played’ by Kawhi Leonard in free agency