SIVASSPOR captain Hakan Arslan was sent off in dramatic scenes after showing the referee video footage of an error on a mobile phone.

Besiktas took the lead in their Super Lig clash on Monday with 18 minutes played when Guven Yalcin found the net. 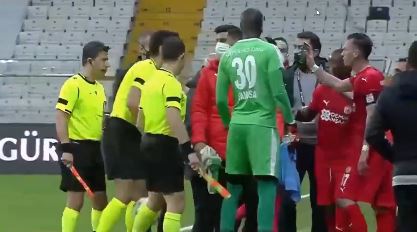 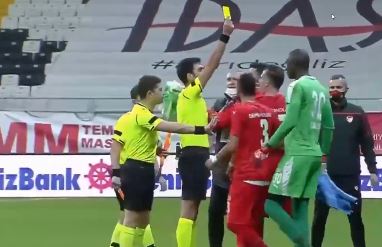 However, replays seemed to prove the ball had gone out of play in the build-up to the goal but it was still allowed to stand despite VAR being in operation in Turkey's top flight.

And Arslan took matters into his own hands after the half-time whistle.

He got out his phone to remonstrate with the officials, shoving the screen in their face and shouting wildly as they headed off the pitch.

But it proved to be a bad call from the midfielder.

Law 5.2 of the Ifab Laws of the Game states: "The decisions of the referee, and all other match officials, must always be respected."

Law 12 adds that players will be cautioned for showing dissent, which Arslan clearly did – and carried on doing so even after his first yellow card.

The Turk, 32, responded by launching the mobile to the ground and then violently kicking a box in the dugout area before stomping down the tunnel.

But some fans on Twitter backed the player's actions – despite a clear breach of the rules.

One wrote on Twitter: “If he legit got it wrong what’s wrong with this – don’t deserve to be sent off.”

A Sivasspor fan tweeted: “The guys are messing with us, thanks, Turkish referees.”

With his Sivasspor side – which includes former Leicester and Leeds winger Max Gradel – down to ten men, Arslan could only watch on for the second half.

The result leaves Sivasspor 15th in the table while title-challengers Besiktas sit second, one point adrift of leaders Galatasaray with 14 matches played.